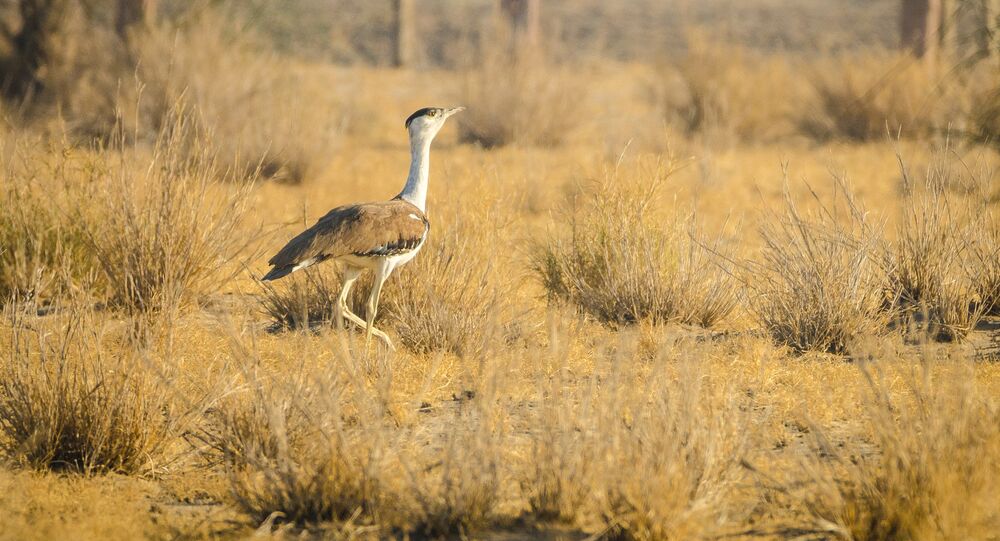 The Indian government is stepping up efforts to conserve the critically endangered Great Indian Bustard. But the outlook is bleak: less than 300 remain and breeding them in captivity is not an option as four decades of efforts have failed.

New Delhi (Sputnik) — Many of the world's most endangered species are also its most remarkable. One such species is the Great Indian Bustard — possibly the heaviest flying bird in the world. It inhabits the grasslands of India and stands well over a meter in height. It has a black crown on its forehead, a pale head and neck, and grey and brown feathers; it is one of nature's superstars.

​The magnificent creature is listed as a critically endangered species on the red list of the International Union for the Conservation of Nature (IUCN). The Indian government's efforts to conserve this rare species have not seen much success, as is evident from the dwindling population.

"The population of the Great Indian Bustard is known to have decreased to less than 300 in the country. The population of this species is declining due to changing land use in important bustard habitats, which are grasslands" India's State Minister for Environment, Forests and Climate Change Prakash Javdekar said in the country's parliament on Monday.

European Commission DG ECHO
Scientists Uncover Mystery of 80 Suicides in ‘Demonic’ Indian Village
He announced that his department would make all-out efforts to breathe new life into a program to conserve and breed the Great Indian Bustard. Five million dollars has been allocated for the implementation of this program in the states of Rajasthan, Gujrat and Mahashtra over the next five years. This is fifteen times the amount allocated for the program last year.

The Great Indian Bustard once ranged across the Indian Subcontinent, but is now locally extinct in 90 percent of its original range. It is now confined to 6 Indian states: Rajasthan, Gujarat, Maharashtra, Madhya Pradesh, Karnataka and Andhra Pradesh. In these areas too, the birds are on the verge of extinction due to complete neglect, poaching, shrinking arid and grassland habitats, lack of protection and nesting sites and missing support from local communities. A study has found that mushrooming wind power projects near their habitats have also caused great harm to this "critically endangered" bird.

G. V. Reddy, a senior official from the state government of Rajasthan, told Sputnik "It is a really complex issue. Land use is changing; climate is changing. We need to deeply study these factors."

© Photo : Mooshikasena
Meet Dinkoism: India's Brand New Mouse-Worshipping Religion
It can't be said that there haven't been efforts in the past to conserve this magnificent bird. Since the early 1960's, repeated attempts have been made to establish captive populations of Great Indian Bustards at the Bikaner and Jodhpur zoos in Rajasthan.

But of the total of l8 birds captured including adults and chicks, only three have survived. Thus, the survival rate was less than l7% and breeding efforts have proven to be a complete failure as all the survivors were females, proving that the birds are difficult to breed in captivity.

Meanwhile, official findings suggest that the number of endangered plant species in India has increased from 648 to 665. They are threatened due to various anthropogenic and natural factors. India's rich biodiversity is threatened as a result of large-scale man-made landscape modifications and the over-exploitation of resources, causing the loss or degradation of natural ecosystems and wildlife habitats.

Nevertheless, the only species that has gone extinct throughout India is the Cheetah, also a grassland species.