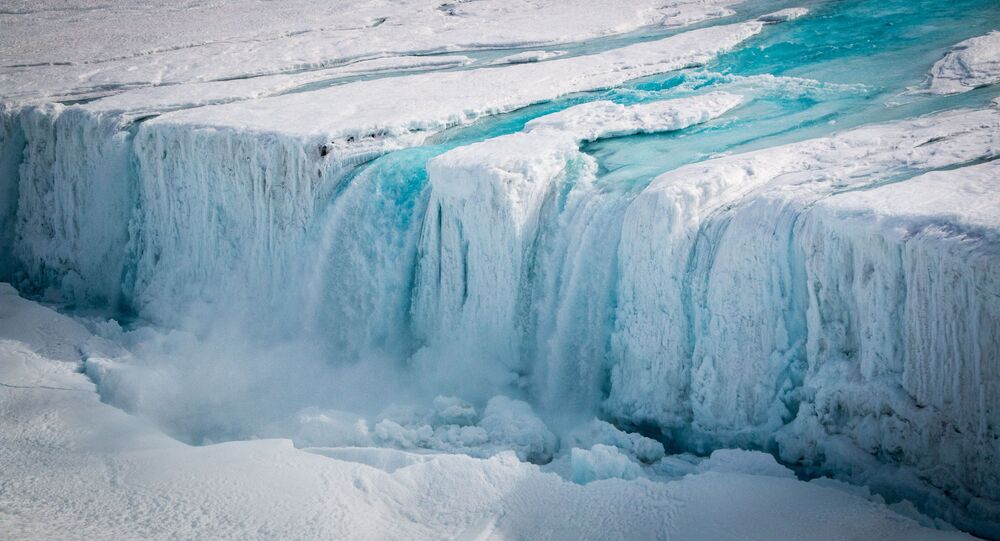 © Sputnik / Valeriy Melnikov
US Researchers to Study Arctic Climate Change With Siberian Colleagues
Two giant icebergs broke off from the Nansen ice shelf in Antarctica on April 7, and are drifting to the northeast, the European Space Agency (ESA) reported on Thursday.

Prior to the event the Nansen ice shelf measured about 35 km across and 50 km long. The Drygalski Ice Tongue, just south of Nansen, stretches 80 km into the sea.

Scientists first observed a crack in the shelf in 1999, after which it grew progressively; its growth accelerated in 2014. Summer melting probably helped weaken and break up the shelf fragments and sea ice within the crack which had kept the icebergs attached.

© Photo : ESA
The two icebergs breaking off the Nansen ice shelf
By April 6 the crack had reached about 40 km long and the next day the icebergs broke off during persistent strong offshore winds.

"The area of the fracture was still negligible at the beginning of 2014, but between April 2015 and March 2016 it expanded from 11.68 sq km to 25.87 sq km, signaling a coming calving," Flavio Parmiggiani of Italy’s Institute of Atmospheric Sciences and Climate (CNR-ISAC) told ESA.

The scientists said that the ice calving is a relatively regular event in the Antarctic and does not pose any immediate threat of blocking supply routes to research stations there.

© Photo : ESA
A map showing the location of the Nansen ice shelf in Antarctica
However, the icebergs may pose a threat to sea-floor moorings in the region that have been used by Italy’s National Antarctic Program since the 1990s, and more recently by New Zealand ocean scientists.

"The crack opened because of a difference in the velocity of ice between the northern Priestley Glacier and southern Reeves Glacier fed portions of the ice shelf, caused by the southern part being hooked and pulled along by the faster moving Drygalski Tongue."