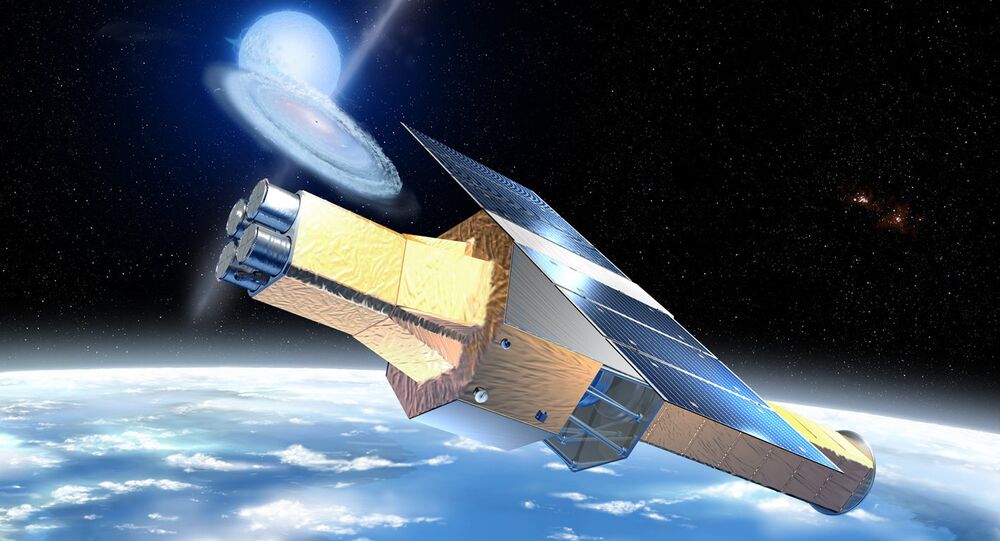 Japan's X-Ray Astronomy Satellite Hitomi, which was launched last month, has managed to make fleeting contact with ground control amid reports that the spacecraft has separated into six parts.

© Photo : ESA/ATG medialab
'Force-Fed' Black Hole Spits Out What It Can't Swallow (VIDEO)
The X-Ray Astronomy Satellite Hitomi, which was launched into low-Earth orbit from Japan's Tanegashima Space Center on February 17, has communicated sporadically with ground control in spite of reports that the satellite has separated into six parts.

Hitomi means "eye" in Japanese, specifically the eye's pupil. It was developed by JAXA to study energy processes in the universe.

The satellite's instruments enable high sensitivity observations of the universe across wide energy range, from X-rays to gamma-rays, in order to investigate the mechanisms of how galaxy clusters were formed and influenced by dark energy and dark matter.

© Flickr / NASA Johnson
That Awkward Moment: US Air Force Stops Recovery Mission of Lost Satellite
Hitomi aims to investigate the formation and evolution of supermassive black holes at the centers of galaxies, and to unearth the physical laws governing extreme conditions in neutron stars and black holes.

On May 27, the Japan Aerospace Exploration Agency (JAXA) stated that scheduled communication with the satellite had failed on March 26.  JAXA had not been able to figure out the state of health of the satellite.

JAXA said it had received a short signal from the satellite, and "is working on its recovery."

Amid fears that the satellite would not be able to fulfil its investigative mission, on March 29 JAXA announced that it had received two more short signals from the satellite, but had "not been able to find the state of its health."

The first was at about 10:00 a.m. on March 28 at Japan's Uchinoura Ground Station, and the second was at around 12:30 a.m. on March 29 at the Santiago Tracking Station in Chile.

JAXA also revealed the reason for the satellite's wayward communication: according to data from the US Joint Space Operations Center, the satellite had separated into six pieces when five objects fell off the spacecraft on March 26.

​Astronomer Paul Maley in Arizona published a video online, which is believed to show the Hitomi satellite spinning in a freefall on March 28.

Despite the accident, scientists are hopeful that Hitomi is mostly intact and will still be able to contribute to science.

Hitomi #AstroH is not dead! Wonderful news!! A communicating spacecraft is a spacecraft that maybe can be saved! https://t.co/yXohSEc757

JAXA official Masaki Fujimoto told Spacenews that Hitomi’s problems likely started with a loss of attitude control in the spacecraft, which stabilizes its

position in space. This disrupted the spacecraft’s ability to generate power from its solar panels and communicate with the ground.

"There’s hope for recovery unless the spacecraft is severely damaged," Fujimoto said, but added that such a recovery would take months rather than days.