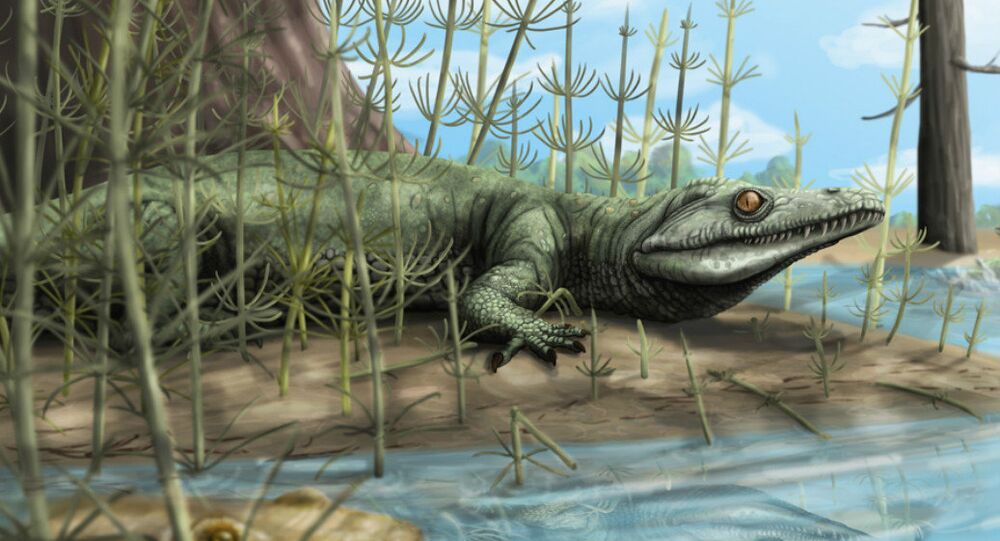 © Flickr / Martín Vinacur
Jurassic Coop: Scientists Grow Chickens With Legs of a Dinosaur
The fossil of a new reptile that lived 250 million years ago has been discovered in Brazil's southernmost state of Rio Grande do Su by a team of scientists from Brazil and the UK.

The scientists found the fossilized skull of the new species at the beginning of near the city of Sao Francisco de Assis. They called it "Teyujagua paradoxa," since Teyujagua in the language of the Guarani ethnic group means "fierce lizard."

"The discovery of Teyujagua was really exciting. Ever since we saw that beautiful skull for the first time in the field, still mostly covered by rock, we knew we had something extraordinary in our hands," said Dr Felipe Pinheiro from Universidade Federal do Pampa.

"Back in the lab, after slowly exposing the bones, the fossil exceeded our expectations. It had a combination of features never seen before, indicating the unique position of Teyujagua in the evolutionary tree of an important group of vertebrates."

© Photo : Wikipedia
Scientists Drilling Their Way to Center of Dinosaur-Killing Asteroid Crater
The reptile lived just after the great Permo-Triassic mass extinction event some 252 million years ago, the greatest mass extinction of all time which killed about 90 percent of all species on Earth and reset the evolution of life.

At that time, the continents as we know them today were assembled into a single landmass called Pangaea, which did not start to break up until the middle of the Triassic period, during which dinosaurs first appeared.

Teyujagua appears very different from other fossils discovered from the same age, and has a transitional anatomy between the more primitive reptiles and the archosauriforms, a diverse group that includes all the extinct dinosaurs and pterosaurs, along with modern day birds and crocodiles.

The Archosauriformes clade originated in the late Permian period prior to the mass extinction, and flourished in the Mesozoic Era, which includes the Triassic, the Jurassic, and the Cretaceous periods, and ended with the extinction of the dinosaurs about 65 million years ago.

"The origins of this clade and its extraordinarily successful body plan remain obscure," the scientists wrote in a paper published about Teyujagua on Friday in the journal Nature.

​"We report a new, exceptionally preserved skull from the Triassic of Brazil, which is the most complete tetrapod fossil yet discovered from the Lower Triassic of South America."

"This skull represents a previously unknown species that is the sister taxon to Archosauriformes and which fills a major morphological gap in understanding of early archosauriform evolution," explained the scientists, who are continuing excavation work at the site where Teyujagua was found.

They hope to discover more promising fossil materials which will provide insights into the nature of terrestrial ecosystems at the beginning of the Triassic period, and the pattern of the recovery of wildlife following a major extinction event.