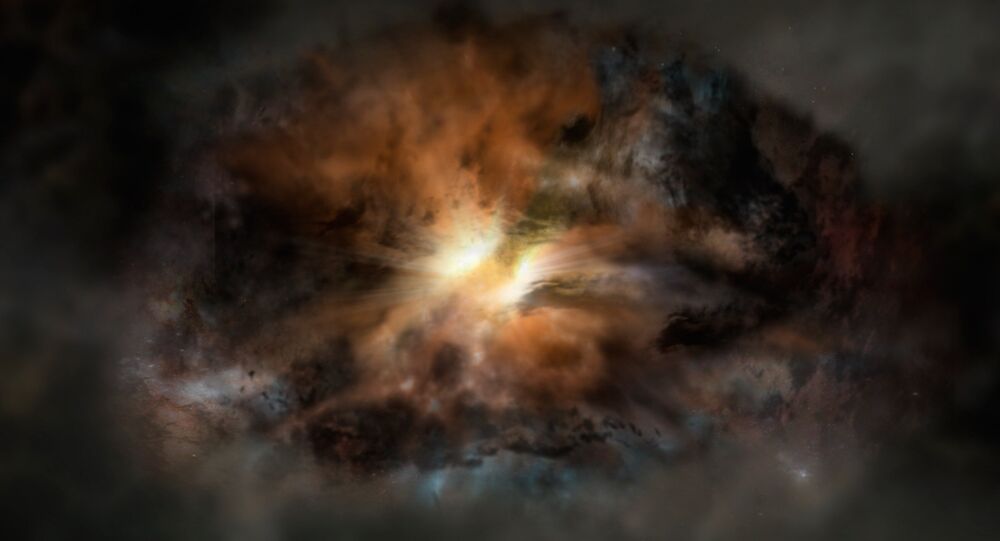 'A Beast in the Infrared': Brightest Galaxy Is Ripping Itself Apart

The most luminous galaxy in the universe was discovered in 2015, and shines like a combination of approximately 350 trillion suns; incredibly turbulent gas from a supermassive black hole at its center is ripping it apart.

© AP Photo / Jin Ma/Beijing Planetarium/The Kavli Foundation
Shooting for the Stars: Scientists Find Most Luminous Supernova Ever in Galaxy Far Away
The brightest known galaxy in the universe, called W2246-0526, is expelling tremendously turbulent gas that is ripping it apart, astronomers using the Atacama Large Millimeter/submillimeter Array (ALMA) in Chile have discovered.

Their study, published in The Astrophysical Journal Letters, reveals that the galaxy has a growing supermassive black hole at its center that is causing the turbulence, and produces its intense brightness.

Galaxies which are powered by supermassive black holes, a billion times as massive as our sun, spewing out powerful jets of particles and radiation, are called quasars; they are the brightest objects in the Universe.

Galaxy W2246-0526 belongs to a very unusual type of quasar known as Hot, Dust-Obscured Galaxies or Hot DOGs.  NASA's Wide-field Infrared Survey Explorer (WISE) mission has observed that only one out of every 3,000 quasars belongs to this class.

Galaxy W2246-0526 is "so chaotic that it is ripping itself apart," said Tanio Diaz-Santos of the Universidad Diego Portales in Santiago, Chile, lead author of the study.

The gravitational pull of the black hole attracts surrounding gas and other matter which spirals into it, forming a structure called an accretion disk. The disk produces intense brightness as it is superheated, equivalent to that of approximately 350 trillion suns.

The light from the disk is then absorbed by the surrounding dust, which re-emits the energy as infrared light.

© Photo : Scott Kelly's twitter
Cosmic Flower: First Blossom in Space On Board ISS
"The momentum and energy of the particles of light deposited in the gas are so great that they are pushing the gas out in all directions," said Roberto Assef, an astronomer with the Universidad Diego Portales and leader of the observing team at the ALMA Observatory in Chile.

"These properties make this object a beast in the infrared," explained Assef.

"The powerful infrared energy emitted by the dust then has a direct and violent impact on the entire galaxy, producing extreme turbulence throughout the interstellar medium."

​The team used the array of high-precision antennas, located at an altitude of 5,000 meters above sea level in northern Chile's Atacama Desert, to trace the motion of the galaxy's interstellar medium – the gas and dust between the stars. They found that this interstellar material is speeding across the entire galaxy at between 500 to 600 kilometers per second.

If the turbulent conditions continue, the intense infrared radiation will boil away all of the remote galaxy's interstellar gas.

"If this pattern continues, it is possible that W2246 will eventually mature into a more traditional quasar," said Manuel Aravena from the Universidad Diego Portales.

Galaxy W2246-0526 lies 12.4 billion light years from Earth, and formed a little over 1 billion years after the big bang. The galaxy was discovered in 2015 by researchers studying data from NASA's WISE spacecraft, which has taken infrared pictures of three-quarters of a billion objects, including remote galaxies, stars and asteroids, since it was launched in 2009.

Surfs Up! Rumors Abound About Discovery of Einstein's Gravitational Waves