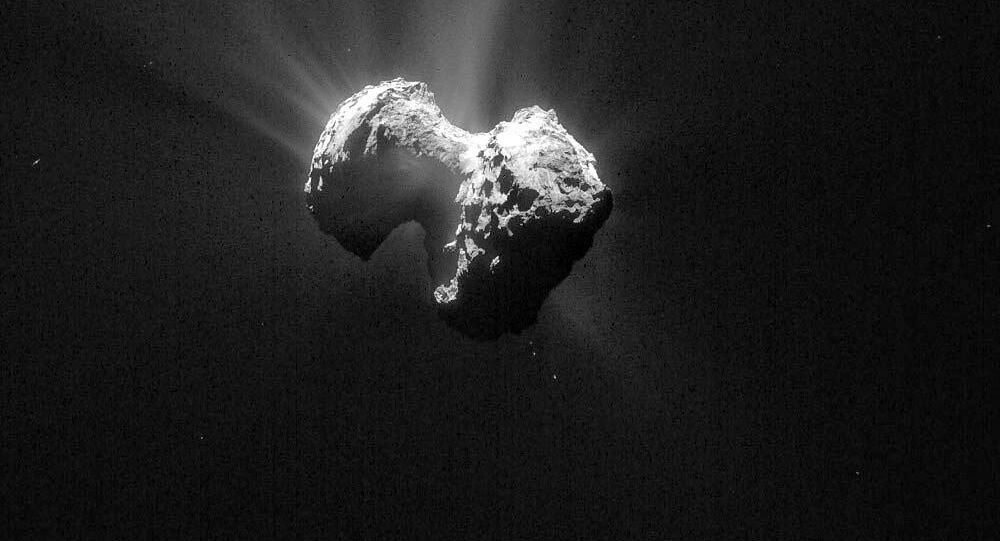 Scientists using the Rosetta probe to study comet 67P/Churyumov-Gerasimenko have unexpectedly discovered that it has oxygen, offering clues about how it formed.

© Flickr / German Aerospace Center DLR
Summertime for Philae: Comet 67P Reaches Closest Point to the Sun
The Rosetta spacecraft surprised scientists studying data from Comet 67P/Churyumov-Gerasimenko when it detected oxygen molecules there; this is the first time that the gas has been detected at a comet.

The gas is stronger closer to the comet's nucleus, and is being released along with water vapor. The strong correlation of the abundance of molecular oxygen and water vapor suggests that the molecules were a part of the comet during its formation, the scientists reported in their paper, published on Thursday in the journal Nature.

"We weren’t really expecting to detect O2 at the comet – and in such high abundance – because it is so chemically reactive, so it was quite a surprise," explained Kathrin Altwegg of the University of Bern, a principal investigator on the Rosetta mission.

"It’s also unanticipated because there aren’t very many examples of the detection of interstellar O2. And thus, even though it must have been incorporated into the comet during its formation, this is not so easily explained by current Solar System formation models."

Because it is highly reactive, and readily breaks up to form compounds with most elements, molecular oxygen is hard to detect in space, where it is the third most abundant element in the Universe. The most abundant is hydrogen, which makes up 3/4 of the mass of the Universe, followed by helium, which makes up almost all of the remaining 25 percent.

Though a distant third in space, oxygen is the most common element in the Earth's crust, and makes up about 47 percent of its mass.

A graphic of results from data collected by the Rosetta Orbiter Spectrometer for Ion and Neutral Analysis Double-Focusing Mass Spectrometer (ROSINA-DFMS) between September 2014 and March 2015 when Rosetta was still on the approach to the Sun along its orbit.

The discovery of oxygen at Comet 67P/Churyumov-Gerasimenko follows the discovery of the noble gas argon at the comet in September. The element was found using the Rosetta Orbiter Spectrometer for Ion and Neutral Analysis [ROSINA] aboard the Rosetta spacecraft, which was launched by the European Space Agency in March 2004.

European Space Agency
Rosetta Mission Extended, to End With a Bump in September 2016
After passing and photographing two asteroids, Rosetta arrived at Comet 67P/ Churyumov-Gerasimenko in August 2014, and has been following the comet on its journey around the Sun, and back out towards the orbit of Jupiter. In November 2014 it delivered a lander, Philea, to the comet's surface, to examine its composition and structure.

The ROSINA instrument on board Rosetta is able to determine the composition of the comet's atmosphere, and the reactions of its gas and ions. By finding out the chemical make-up of comets, scientists hope to understand their role in bringing water and other elements to the inner planets during the early history of the Solar System.