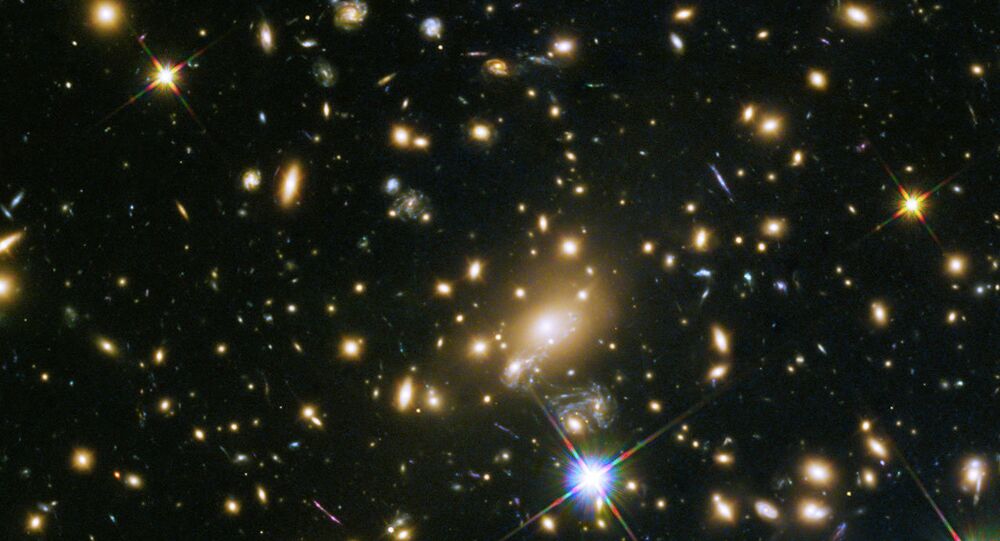 The distant galaxy formed just 600 million years after the Big Bang, and its discovery may force scientists to revise their timeline for the evolution of the Universe.

© Flickr / Hubble Heritage
Astronomers Discover 854 Dark Galaxies in Faraway Coma Cluster
Astronomers at the California Institute of Technology have spotted the most distant galaxy ever, which formed less than 600 million years after the Big Bang.

The researchers, who published their findings in the latest issue of Astrophysical Journal Letters, investigated the galaxy using the multi-object spectrometer for infrared exploration [MOSFIRE] at the W.M. Keck Observatory in Hawaii.

© NASA . I. Labbe, (Leiden University)
This is galaxy EGS8p7, as seen from the Hubble Space Telescope (wide and top right) and Spitzer Space Telescope (inset, bottom right), taken in infrared.
Using the MOSFIRE spectrometer, the scientists determined the galaxy's redshift, the extent to which a celestial object is moving away from us. As a galaxy becomes more distant, its light waves become stretched towards redder and longer wavelengths.

Prior to the team's discovery, the furthest known confirmed galaxy, EGS-zs8-1, was calculated to have a redshift of 7.73.

"The surprising aspect about the present discovery is that we have detected this Lyman-alpha line in an apparently faint galaxy at a redshift of 8.68, corresponding to a time when the universe should be full of absorbing hydrogen clouds," said professor Richard Ellis, one of the researchers who worked on the paper.

The Lyman-alpha line, a kind of radiation emitted by young, newly forming galaxies, is the result of hot hydrogen gas that has been heated by ultraviolet emission from new stars.

Its detection is a commonly used indicator of star formation, but the scientists did not expect to observe it from so far away:

"We didn’t think we’d see Lyman alpha at these crazy distances, but we figured it’s worth a shot,” said Adi Zitrin, lead author of the paper, entitled 'Lyα Emission from a Luminous z = 8.68 Galaxy: Implications for Galaxies As Tracers of Cosmic Reionization.'

© NASA . Kjell Lindgren
Astronaut Snaps Stunning Lightning Strike Shot from Space Station
Immediately after the Big Bang, the glowing plasma that composed the Universe recombined into atoms of neutral gas – mostly hydrogen and some helium. Over the Dark Ages of the Universe, the next nearly half billion years, the first galaxies began to form and brought light to the Universe, ending the Dark Ages and reionizing the neutral gas.

However, the clouds of neutral hydrogen atoms before the reionization of the Universe would have absorbed certain radiation emitted by young, newly forming galaxies such as the Lyman-alpha line, rendering a galaxy such as EGS8p7 undetectable to scientists.

"The galaxy we have observed, EGS8p7, which is unusually luminous, may be powered by a population of unusually hot stars, and it may have special properties that enabled it to create a large bubble of ionized hydrogen much earlier than is possible for more typical galaxies at these times," Sirio Belli, a graduate student on the project, suggested a reason why scientists were able to detect EGS8p7.

The discovery of EGS8p7, says Zitrin, could even force scientists to rethink their conception of how the Universe was formed:

"We are currently calculating more thoroughly the exact chances of finding this galaxy and seeing this emission from it, and to understand whether we need to revise the timeline of the reionization, which is one of the major key questions to answer in our understanding of the evolution of the universe," says the astrophysicist.

Birthday Gift From a Galaxy Far, Far Away