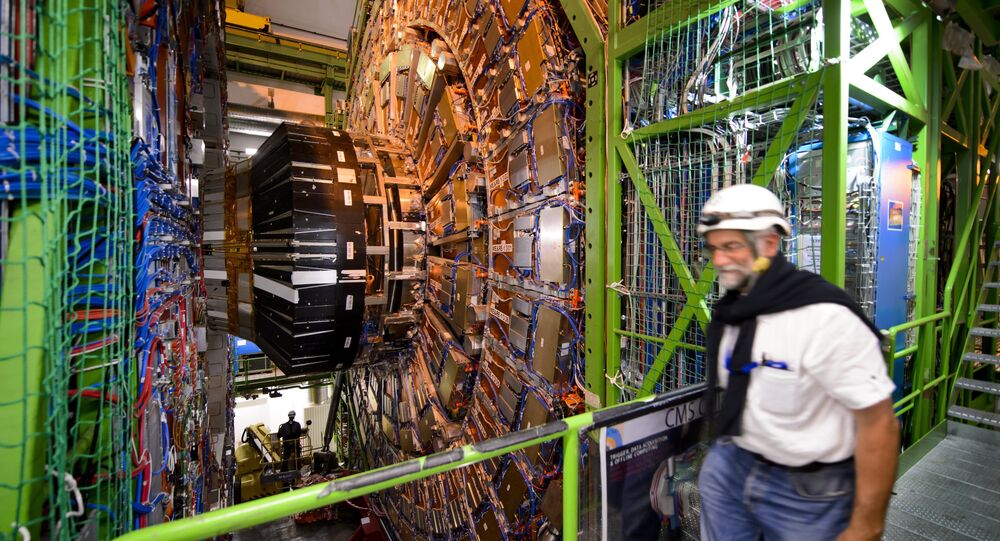 Experiments in particle physics carried out using the Large Hadron Collider have spotted an anomaly in the behavior of particles which does not correspond to the standard model of physics.

© Flickr / fdecomite
Cosmic Tangles Expanded Universe at a Rate of Knots, Study Says
Researchers carrying out experiments in particle physics using the Large Hadron Collider at CERN have discovered an anomaly in the behavior of particles that challenges the Standard Model, physicists' best theory so far regarding fundamental particles and how they interact.

"The Standard Model says the world interacts with all leptons in the same way. There is a democracy there. But there is no guarantee that this will hold true if we discover new particles or new forces," explained Hassan Jawahery,  a physics professor at the University of Maryland, and co-author of the study, published September 4 in the journal Physical Review Letters.

According to the results of experiments carried out using the Large Hadron Collider, the rate of decay of the B-meson particle, a process which produces lighter particles such as the tau lepton and the muon, was different from that predicted by the Standard Model.

© Flickr / NASA's Marshall Space Flight Center
Dark Matter Could Be Way More Complicated Than Scientists Thought
The Standard Model's concept of Lepton universality holds that electrons, muons and tau leptons should behave in the same way, and at the same rate, once corrected for their difference in mass.

However, using data from the LHC's first run, the researchers found a small difference in the decay rates for taus and muons. The results echo a similar finding from the LHD last year, which observed B meson decay 25 percent more frequently into electrons than muons.

Nevertheless, scientists caution that the findings could be a statistical fluke, and counsel that further investigation is needed.

"While these two results taken together are very promising, the observed phenomena won't be considered a true violation of the Standard Model without further experiments to verify our observations," said co-author Gregory Ciezarek, a physicist at the Dutch National Institute for Subatomic Physics.

"We are planning a range of other measurements. The LHCb experiment is taking more data during the second run right now. We are working on upgrades to the LHCb detector within the next few years," said Jawahery.

"If this phenomenon is corroborated, we will have decades of work ahead. It could point theoretical physicists toward new ways to look at standard and non-standard physics."

© CERN
Large Hadron Collider
The first run of the Large Hadron Collider at CERN, the European Organization for Nuclear Research, took place from 2010 to 2013 and was notable for the discovery of the Higgs boson, the particle which endows all particles with mass.

The Higgs boson is an essential component of the Standard Model of particle physics, a framework first formulated in the 1970s to describe the behavior of the particles and forces that make up matter. However, the Standard Model remains incomplete, and scientists hope the second research run of the LHC, which began on June 3, can help answer some of its unanswered questions.