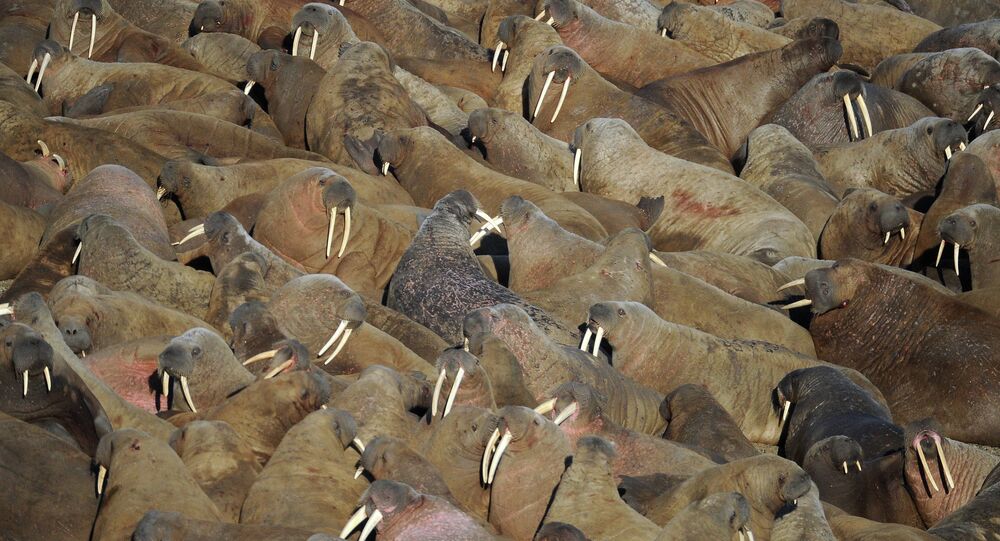 Polar Mystery: Why Walruses ‘Haul Out’ in Masses in Alaska, Chukotka Again

The epic annual gathering of walruses has started on both sides of the Chukchi Sea, which divides Russia from the US. What causes tens of thousands of sea mammals to strand themselves onto beaches?

An estimated 5,000 walruses reportedly occupy sea shores near Ryrkaypiy in Chukotka, Russia, while tens of thousands of their relatives have overcrowded a spot close to Point Lay in Alaska, US.

“While haulouts can be potentially dangerous to the animals gathered on shore, we’re concerned about what events such as these mean for the health of the entire Arctic marine system,” Pete Ewins, WWF Arctic Species specialist said.

As @POTUS heads to the Arctic this week, here's why walrus are coming ashore in Alaska and Russia: http://t.co/J0zBmduF9h #GLACIER

Travel Manitoba
Shell Oil Drilling Serious Threat to Russian Polar Bear Reserve: Greenpeace
The first massive late summer walrus gathering took place in 2007, and after that it has been recorded seven of the nine consecutive years. While this year’s estimates have not been completed yet, last year there were as many as 35,000 animals recorded. The ‘walrus gathering’ phenomenon is a new one, presenting a direct consequence of the global climate change, according to scientists.

The simple explanation for the large massings of this sea mammal on the Chukchi Sea shores is record annual melting of polar ice in the region, which leads to the walruses hauling-outs on the sea shores instead of the ice chill outs.

“This is a new phenomenon,” said US Geological Survey (USGS) wildlife biologist Anthony Fischbach, as quoted by VICE News. “Large coastal haulouts forming have only been seen during years of complete sea ice melt in the Chukchi Sea.”

This year ice monitoring results have not been available yet, but 2015 is considered one of the hottest years in modern history.

“This past July was the second warmest on record for Alaska,” specifies Pete Ewins of WWF.

It may be worth adding that in the past twelve years, ice-free period hit record lows four times, according to VICE News.

“We've seen rising temperatures, both sea surface temperatures and air temperatures, and of course sea ice has been going out at a faster rate, sooner, each year, and freeze is coming later each year,” James MacCracken, Supervisory Wildlife Biologist at the US Fish and Wildlife Service, was quoted as saying by VICE News. “When the ice completely melts out, the walruses eventually have to come to shore and haul out. It's all connected.”

This year, the large rookery of walruses is taking place near the Eskimo village of Point Lay in Alaska with a population of 250. For natives, the gathering causes trouble, as they are neither allowed, nor able to hunt the animal they largely depend on.

“The ocean is our garden, it's the biggest source of food for us Natives,” Leo Ferreira III, the Tribal Council President of Point Lay told VICE News. “[Walruses] are a staple food, so it's a real concern to this community and to other communities in our area.”

These Native Alaskan villagers may become the first US climate refugees, according to Adam Markham, director of the Climate Impacts Initiative. Listing flooding and erosion as grave challenges for Alaska’s 213 native villages, the environmentalist also touches upon the importance of sea animals for local residents in an article on the Union of Concerned Scientists’ website on Friday.

“Ice is vital for Alaska Native communities whose cultures still center on subsistence hunting, fishing, and harvesting wild foods. Seasonal ice is exploited by hunters in pursuit of fish, wildfowl, seals, walrus and in some communities, whales,” the expert said. “When seasonal ice is late in forming, or fails to form at all, traditional hunts are delayed or disrupted.”

© Photo : Vlad Minin
Arctic Nations to Discuss Immediate Region Issues in Alaska
Meanwhile, the hauling-outs are happening just days before foreign ministers of Arctic nations, as well as key stakeholders from non-Arctic states, will address the immediate challenges of the region and propose possible solutions at the international conference GLACIER in Anchorage, Alaska, held on August 30-31.

US President Barack Obama and Secretary of State John Kerry are to attend the conference. Obama will become the first sitting US president to visit Alaska where the president will address the issue of climate change.

RT if you agree: It's time to #ActOnClimate. Watch @POTUS preview his trip to Alaska → http://t.co/eAVC9RjeMV http://t.co/X1iKf8dKDb

In recent months, Obama has pushed through some major climate change policy initiatives such as the Clean Power Plan, which aims to curb US power plant carbon pollution by 32 percent in the next fifteen years.

They're getting ready for #GLACIER at the @AnchorageMuseum with this Athabascan message of welcome & climate exhibits pic.twitter.com/9wzYAFsfOS

GLACIER will bring together representatives of Arctic nations and intergovernmental agencies from numerous countries including the United Kingdom, China, Russia, Germany, France, Japan and others.