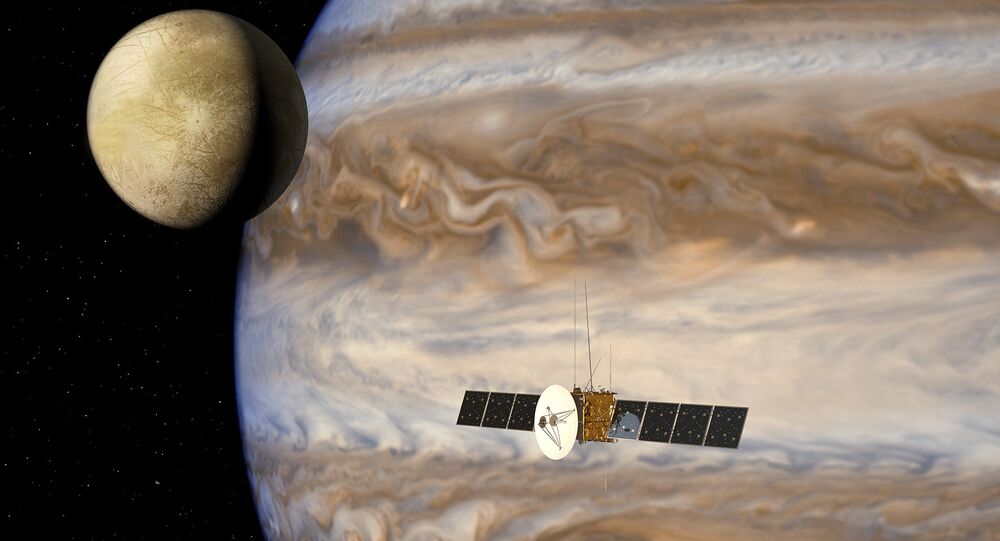 Aircraft manufacturer Airbus has been selected by the ESA to manufacture a spacecraft which will take off in 2022 on a journey to explore the moons of Jupiter.

© Photo : Twitter/@AJ_FI
Made in China: Assembly of World's Biggest Radio Telescope Gets Underway
Airbus has begun work on the production of a space probe which will scour the icy moons of Jupiter for alien life, after the European Space Agency [ESA] announced the award of the contract last week.

The probe is scheduled to launch in 2022, after which it will spend 7.5 years traveling around Earth, Mars and Venus before reaching Jupiter and its moons, also known as the Jovian system.

© NASA . G.Pavlov
Pulsar Lands Knockout Blow on Star 30 Times Bigger Than the Sun
After arriving at the giant planet in 2030, the spacecraft will spend three years in orbit around Jupiter, carrying out the ESA's JUICE [JUpiter ICy moons Explorer] mission.

The goal of the JUICE mission is to explore three of Jupiter's four largest natural satellites, also called the Galilean moons: Ganymede, the largest moon in the solar system, larger than the planet Mercury; Europa, which is thought to have twice as much water as Earth; and Callisto, which appears to have a less well-defined surface, a mixture of ice and rock.

"All three of these planet-sized satellites are thought to have oceans of liquid water beneath their icy crusts and should provide key clues on the potential for such icy moons to harbor habitable environments," the ESA stated in its press release.

Jupiter's fourth large moon, the volcanic Io, is thought to be covered in sulfur and sulfur dioxide, and has no water. It is the most volcanically active body in the solar system, where volcanic plumes rise 300 km above the surface.

"JUICE will address the question: are there current habitats outside Earth in the Solar System with the necessary conditions to sustain life?" François Auque, Head of Space Systems at Airbus, commented on the project.

Stuart Rankin
Jupiter's moon Europa
In addition, JUICE will explore Jupiter's atmosphere, enormous magnetosphere, as well as its dark rings, which are made up of dust and tiny pieces of rock. Unlike the bright, icy rings of Saturn, which were first spotted by Galileo in 1610, the faint rings of Jupiter were not observed until the first visit of spacecraft to the planet in the 1970s.

The last spacecraft to visit Jupiter was NASA's Galileo, which arrived at the Jovian system in 1995 and made ten close encounters with its moons, and a flight through its tenuous rings in 2002 before ending its mission with a plunge into the giant planet's atmosphere in 2003. Jupiter's four largest satellites are also called the Galilean moons; they were first discovered by the Italian astronomer in the early 17th century.