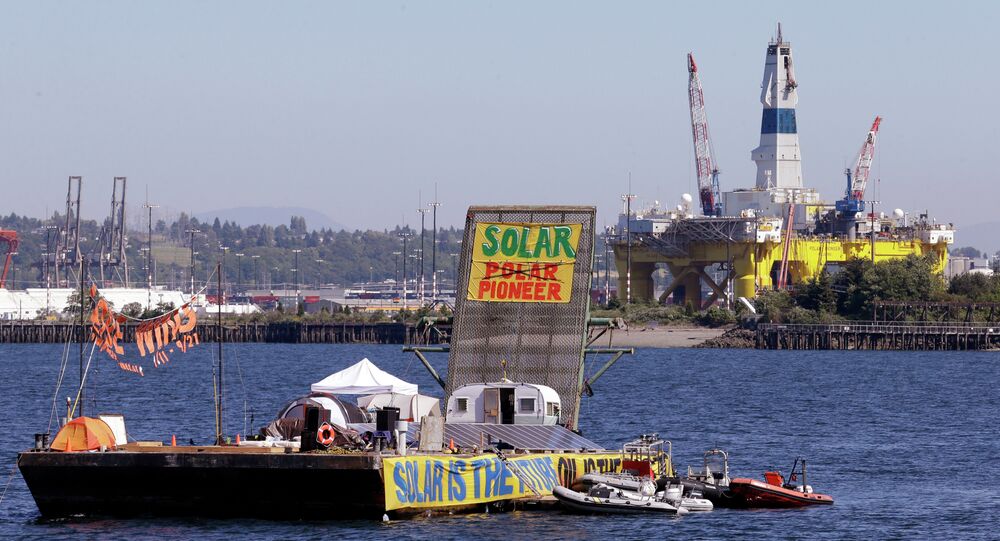 The Greenpeace activists on kayaks try to prevent the departure of Shell’s oil rig by forming a human line, Polar Pioneer, to the Arctic in the Elliott Bay off Seattle.

MOSCOW (Sputnik) — The Greenpeace activists on kayaks formed a human line in the Elliott Bay off Seattle, trying to block departure of Shell’s oil rig, Polar Pioneer, to the Arctic, the environmental group said on its Facebook page Monday.

Greenpeace, arguing that Arctic drilling poses danger to unique ecosystems and will contribute to global warming, called on its supporters to "make sure your go bag is ready" Monday night since earlier it had found out that oil rig will attempt to leave the city’s port in the morning.

According to the local Kiro 7 TV Channel, about 40 to 50 ShellNo activists in kayaks participate in the protest.

© AFP 2021
Spain's Environment One of the Main Victims of Economic Crisis - Greenpeace
It has not been confirmed whether Shell really intends to dispatch its oil rig off to Arctic on Monday.

Shell has assembled a small fleet of Arctic drilling vessels in Seattle after the US Bureau of Ocean Energy Management gave it a green light to begin drilling off Alaska's coast this summer.

Shell's Arctic drilling plans have stirred much controversy in Seattle, with Mayor Ed Murray and the city council openly voicing opposition to the oil giant’s presence in the Seattle’s port.