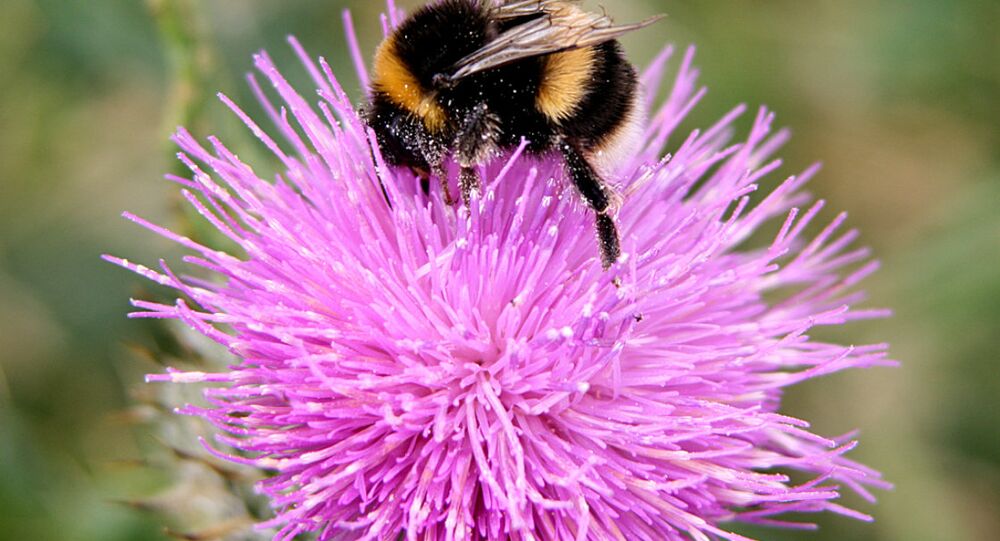 A new theory about the decline of global bee populations posits that they may suffer from a type of animal Alzheimer's disease caused by aluminum contamination in their environment.

A study from researchers at Keele and Sussex universities found that high levels of aluminum contamination in bee pupae may be causing a type of mental disfunction which adversely affects the populations at large.

Researchers found levels of the metal in bee pupae that ranged from 13 to 200 ppm (parts per million.) In humans, just 3 ppm would "be considered as potentially pathological in human brain tissue," notes the study, published in the journal PLOS One.

The pupae were taken from naturally foraging bumblebee populations in the United Kingdom, gathered by Sussex researchers and sent to Keele for analysis. The idea to investigate aluminum levels proceeded from previous studies which found that bumblebees do not actively avoid eating nectar with high aluminum levels when they forage for food.

Aluminum is "the most significant environmental contaminant of recent times," as the report describes it, and is already known to have an adverse effect on fish, forests, and crop productivity

"Bees, of course, rely heavily on cognitive function in their everyday behaviour and these data raise the intriguing spectre that aluminium-induced cognitive dysfunction may play a role in their population decline – are we looking at bees with Alzheimer's disease?"

Though there was initially a theory that aluminum causes Alzheimer's disease in humans, "the link has not been proven despite continuing investigation," cautions the Alzheimer's Society

And the Keele and Sussex study recognized that aluminum contamination may only be one factor in the thinning bumble bee populations.

"It is widely accepted that a number of interacting factors are likely to be involved in the decline of bees and other pollinators – lack of flowers, attacks by parasites, and exposure to pesticide cocktails, for example," said Exley.

Aluminum is widely used in many different areas of industry as anything from a rising agent in baked goods to an ingredient in many cosmetics and skin care products.

While the human body can process a certain amount of aluminum, if an excess is ingested, it will start to store in various tissues and organs, including the nerves and brain.

Most of the concern over the mysterious mass die-offs of bees reported since the middle of the last decade have focused on managed honeybee colonies which are essential to agriculture. In the US, for example, honeybees are responsible for pollinating roughly a quarter of the crops produced in the nation.

© Flickr / Forest Wander
Beemageddon: US Beekeepers Report Loss of Nearly Half Their Colonies

But naturally foraging bumblebees have also seen their populations affected, though data on the decline is not as thorough as that for honeybee colonies.

Scientists are evaluating various possible factors in the declines, and one of the main suspected culprits are pesticides — particularly a class called neonicotinoids, or neonics, which are thought to slow colony growth and to adversely affect reproduction.

There is also some evidence that bees react to the chemicals similarly to how humans react to related nicotine — in other words, they get addicted.

Another possible culprit in the collapse of American colonies is a tiny, blood-sucking mite called varroa destructor, which arrived in the United States in the 1980s and spread easily within bee colonies.

Honey? Fearless Chinese Man Covers Himself With Over 109 Kg of Bees

Millions Of Bees Swarm I-5 After Semi Rolls Over