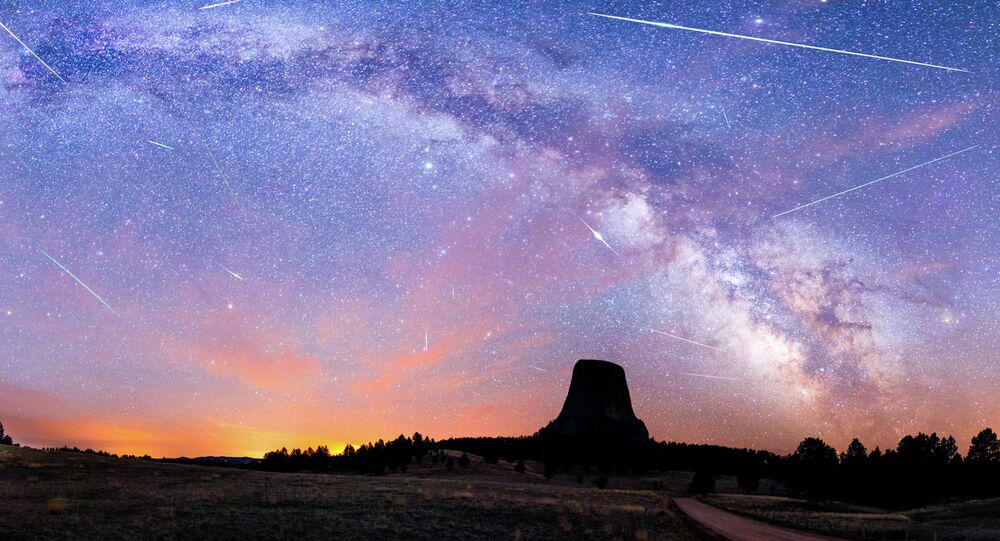 The Eta Aquarid meteor shower, one of two annual showers that are caused by the debris trail of Halley's Comet, is most visible in the early hours of the morning, before sunrise.

Youtube/Accident
Spectacular Meteorite Spotted Over Switzerland
One of the year's major meteor showers, the Eta Aquarid, will reach its annual peak of activity this week, when the debris trail from Halley's Comet burns up in our atmosphere and streaks through the night sky at speeds of 66 km/s, or 148,000 mph.

This year's peak will occur on May 6 at 9 AM EDT, with the best viewing at just before dawn, with meteor rates of about 30 meteors per hour; however, the moon's brightness is set to hamper the view for meteor enthusiasts this year, reducing the peak rate to under 20 meteors per hour, according to NASA.

The Eta Aquarids are named after the radiant point of the meteor shower, from which the meteors appear to the viewer to originate and which aligns with the faint star Eta Aquarid, one of four stars which make up the Water Jar asterism in the northern part of the constellation Aquarius the Water Bearer.

NASA
A composite image of 13 Eta Aquarid meteors from the NASA All Sky Fireball Network station in Mayhill, New Mexico the morning of May 6, 2013.

The meteors are viewable in both the Northern and Southern hemispheres in the hours before dawn, though less meteors will fall in the Northern Hemisphere, with an hourly rate of only about 10 meteors. However, viewers may be able to catch a glimpse of 'earthgrazers,' meteors that skim along the upper part of the atmosphere, appearing when the radiant of a meteor shower is near the horizon, spewing meteoroids not down, but horizontally overhead.

Around October 21, the Earth will cross the orbital path of Halley’s Comet again, leading to the Orionids meteor shower, the second of the year to originate from Halley's Comet, whose nucleus sheds ice and rocky dust into space each time it returns to the inner solar system.

Halley's Comet, first recorded by astronomers in at least 240 BC, crossed the Earth's orbit in 1986 and is scheduled to visit again in 2061; its current position is beyond the orbit of Neptune.

Comet 67P's Speed of Rotation Shows Signs of Slowing Down