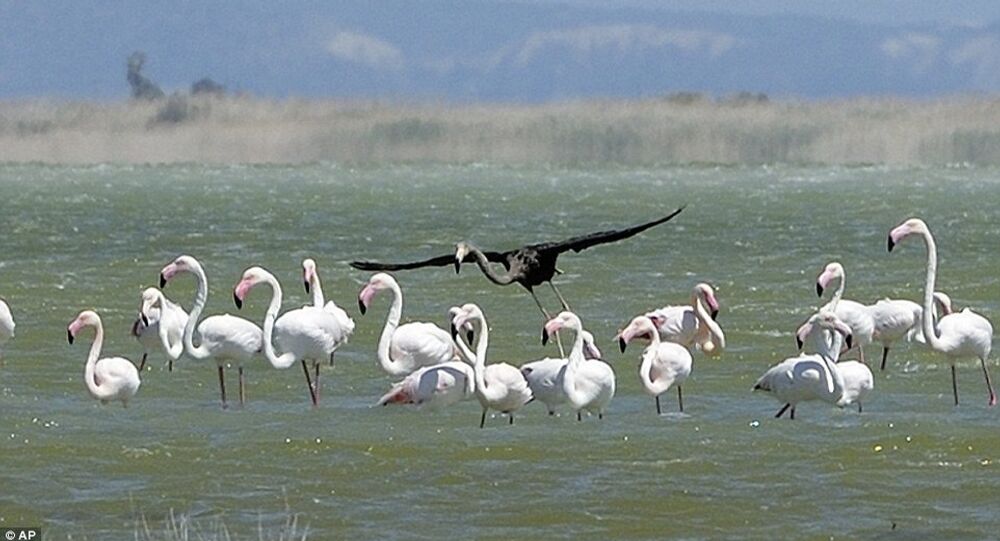 It was quite the exciting day for a group of environmentalists in Cyprus this week. While doing their annual count of Flamingos on the banks of Aktoriri salt lake on the eastern mediterranean island, they witnessed - and captured on film - a marvelous site: the extremely rare black Flamingo.

The black flamingo is almost completely black except for a small tuft of white feathers on its rear.  Scientists say that this bird has a rare genetic condition known as melanism, which causes him to produce much more pigment melanin than his pink counterparts, resulting in his distinctive color.

Head of the environmental department of the British Sovereign Bases, Pantelis Charilaou, said: “A melanistic individual is a very, very rare sighting… basically its the opposite of an albino when the individual produces more melanin than normal.”

There has only ever been one other sighting of a black flamingo, which was spotted in Israel back in 2013. Scientists believe that the bird seen feeding at Aktoriri late in Cyprus could very well be that same bird.  This means that it could be the only black flamingo in the world.

SeaWorld Sued Over Drugging of Orcas Confined in 'Chemical Tubs'

Mufasa Gets His Head Stuck in Barrel While Feeding