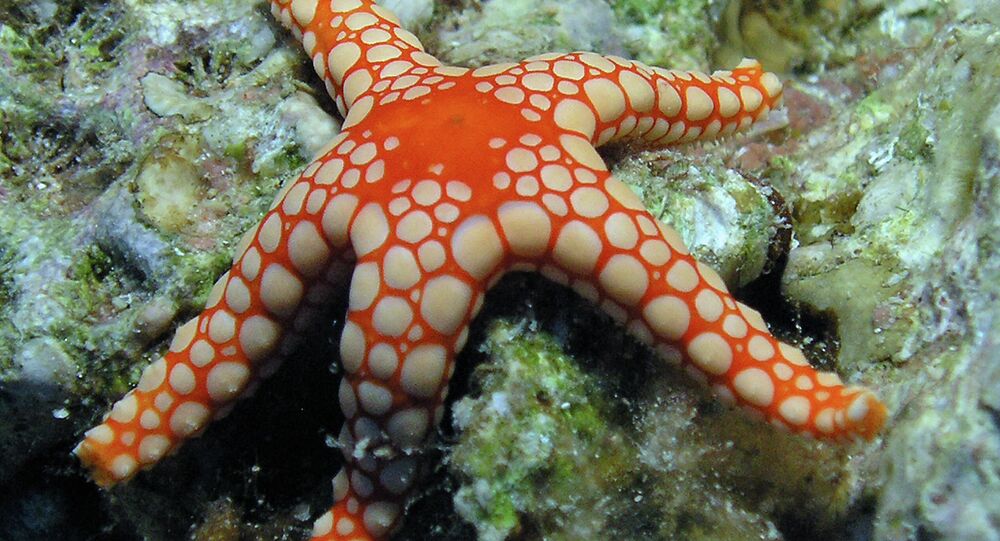 Mysterious Die-Off Kills Millions of Starfish Along US West Coast

Washington State Democrats in the US House of Representatives say it’s time to do something about millions of starfish dying along the West Coast, a problem that's been perplexing marine scientists.

Rep. Denny Heck, along with five other Democratic members of the House, want the National Oceanic and Atmospheric Administration to declare “sea star wasting syndrome,” a disease associated with raised water temperature that appears to be causing the mass mortality of affected starfish, an emergency, before star fish become an extinct species.

“The truth of the matter is we have absolutely no system in place to respond. None,” Heck said in a speech on the House floor, McClatchyDC reported.

“There has never been an outbreak of disease in natural populations of animals that I know that’s been this large,” said Drew Harvell, a professor of ecology and evolutionary biology at Cornell University.

© Flickr / Ehsan Khakbaz H
“There has never been an outbreak of disease in natural populations of animals that I know that’s been this large,” said Drew Harvell, a professor of ecology and evolutionary biology at Cornell University.

Many researchers initially believed radiation from the Fukushima nuclear disaster could be at the heart of the disease outbreak.

“With contaminated water from Japan’s crippled Fukushima nuclear complex continuing to pour into the Pacific, scientists are concerned about how that radioactivity might affect marine life. Although the ocean’s capacity to dilute radiation is huge, signs are that nuclear isotopes are already moving up the local food chain,” wrote Yale professor Elizabeth Grossman in a 2011 report entitled “Radioactivity in the Ocean: Diluted, But Far from Harmless.”

Professor Grossman compared the current epidemic with a previous uptick in mortality among starfish in the White Sea during the 1990s that was linked to nuclear pollution.

© Flickr / Bill Sutton
Originally many scientists believed that the Fukushima nuclear disaster was a factor in the uptick in mortality, but later research found that not to be the case.

Dr. Peter Raimondi of the University of California at Santa Cruz, one of the first researchers to point out the disease in starfish, believed debris from the earthquake and the power plant contaminated the water, propagating the disease which the simple immune system of the starfish would not be able to fight off, according to News 1130.

“One of the byproducts is obviously nuclear radiation discharge. The second thing is debris, tons of debris, which has shown up especially on the North West Coast,” he added.

Today, scientists are less convinced that Fukushima is to blame, citing the fact that awareness of the disease predates the disaster, the die-offs are observable on both US coasts, and other marine life doesn’t appear to be affected in the same way.

Dr. Ian Hewson, a Microbiologist at Cornell University, and his team say they may have found the root cause of the spreading virus. After isolating the strain in sick organisms and injecting it into healthy ones, the team found that the wasting syndrome may be something that lies dormant in many species of sea star.

Back in Washington, Representative Heck authored the Marine Disease Emergency Act, which would require federal agencies to respond to this problem and give research money to scientists who he believes may be able to solve it. He also wants Congress to set aside $12 million for research coordination and wants to start a defense fund.

“The origin of my passion dates to being a kid on the Washington coast and picking them up, seashells and sea stars,” Heck said. “If you grow up here and your parents go camping on the coast, it’s one of those wondrous things…. It tugs at my heart. This is a massive kill-off, and we have absolutely no federal mechanism to respond.”