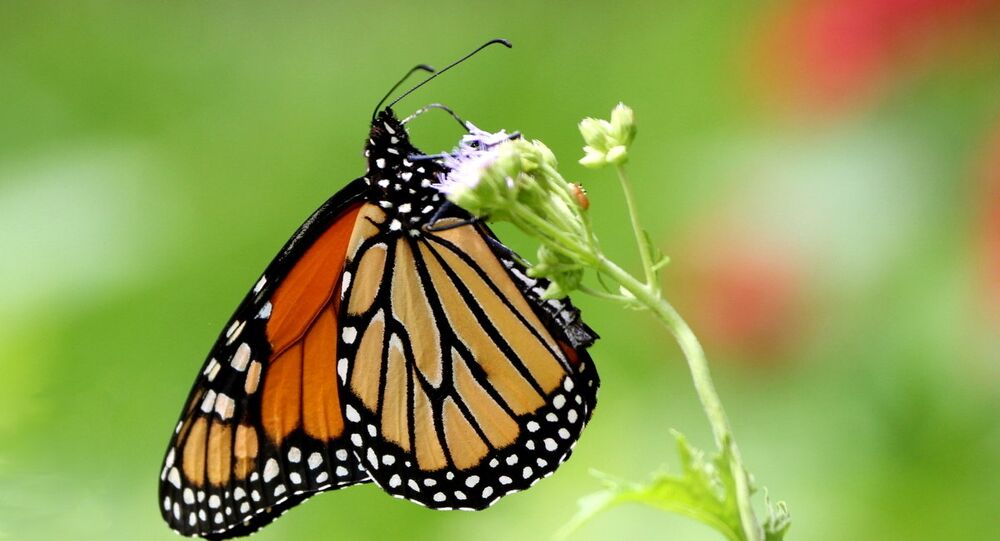 Monsanto’s Roundup Ready herbicide has wiped out 99 percent of milkweed in corn and soybean fields in the US Midwest since 1999, eliminating the Monarch's only source of food, according to environmentalists.

“This report is a wake-up call. This iconic species is on the verge of extinction, because of Monsanto's Roundup Ready crop system,” executive director at Center for Food Safety Andrew Kimbrell said in a press release announcing the study’s findings on Thursday. “To let the monarch butterfly die out in order to allow Monsanto to sell its signature herbicide for a few more years is simply shameful.”

© Flickr / Stephen Melkisethian
No Thanks! Activists Hold "Eat-In" at Monsanto Headquarters
Monsanto’s Roundup Ready herbicide has wiped out 99 percent of milkweed in corn and soybean fields in the US Midwest since 1999, eliminating Monarch butterfly’s only source of food, the report said. The butterfly lays eggs on milkweed, the only food the larvae will eat.

“Milkweed growing in Midwest cropland is essential to the monarch’s continued survival. Without milkweed, we'll have no monarchs,” biologist with Center for Food Safety and co-author of the report Martha Crouch said.

As a result, Monarch populations have dropped nearly 90 percent over the past 20 years as the use of the herbicide has expanded in US Midwest corn and soybean crops.

The Monarch butterfly migrates each year thousands of miles from the United States and southern Canada to wintering grounds in Mexico.

The Center for Biological Diversity, the Center for Food Safety, the Xerces Society for Invertebrate Conservation have petitioned the US government to place the Monarch butterfly on the endangered species list. In response, the US Fish and Wildlife Service initiated in December a status review to determine whether to place the butterfly on the list.