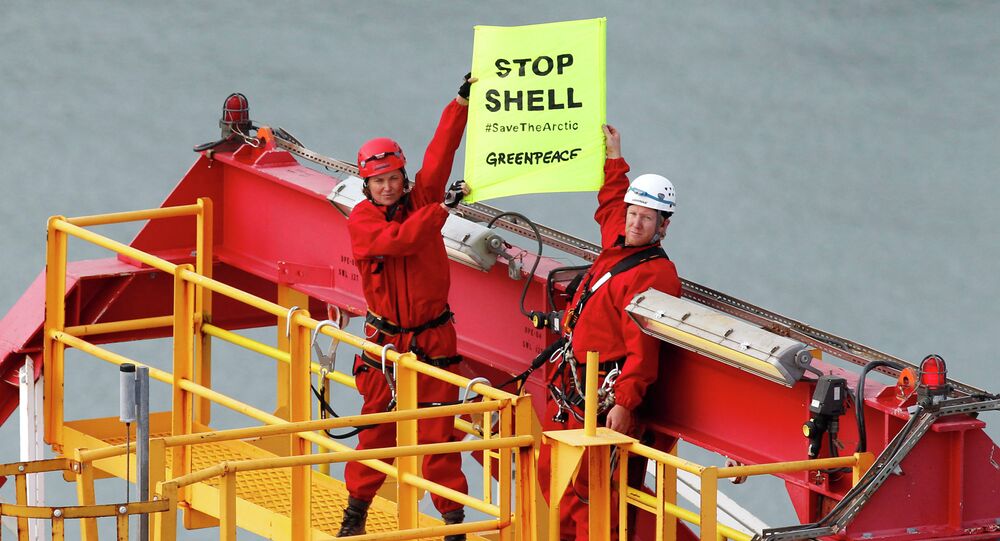 More than 13,000 people have signed a petition launched by Greenpeace to prevent the Anglo-Dutch energy company Shell from drilling on the remote Arctic coastline of Alaska.

© East News / Imaginechina
China's Biggest Coal Power Plant Violates Emission Standards: Greenpeace
MOSCOW, January 30 (Sputnik) – The company may start drilling for oil in the Arctic as early as this summer. It is currently waiting for approval from the US government.

"A wave of public opinion is rising against Shell's drilling plans, just when companies are backing away from expensive oil projects and scientists are warning that Arctic oil must stay in the ground. This might be the tipping point where we can stop Shell from drilling in the Arctic," the petition, published on the savethearctic.org site, reads.

The drills on the Alaskan shores have a 75 percent probability of causing oil spills under the ice, which will have a negative impact on the environment, the petition said.

Over "500,000 people have already written to the [US] Bureau of Ocean and Energy Management in protest of Arctic oil drilling," the petition added.

However, it remains to be seen how far Greenpeace is ready to go. In 2013, Greenpeace activists protesting Arctic drilling attempted to scale a rig which belonged to Russian state-owned gas giant Gazprom, neglecting security regulations.

In September 2013, Russian border guards seized the Dutch-registered Greenpeace icebreaker, the Arctic Sunrise. All 30 people on board the vessel, known as the Arctic 30, were detained by Russian authorities.

On Thursday, Shell announced it would cut spending by $15 billion over the next three years due to falling oil prices, but underlined the Alaska projects would not be affected. Shell said it was planning to obtain the necessary permission to resume the drilling in Alaska in 2015 after the works were suspended in 2013 due to legal issues.