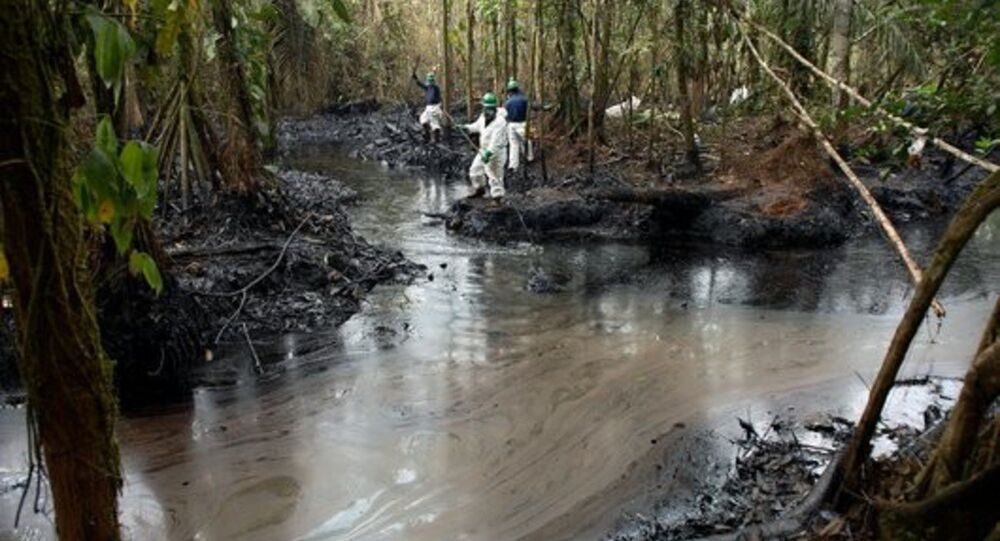 Chevron Corporation has received a dubious "Lifetime Achievement" award for its terrible environmental record at the World Economic Forum in Davos, Switzerland.

MOSCOW, January 24 (Sputnik) — Swiss environmental groups have awarded Chevron Corporation a "Lifetime Achievement" award for its terrible environmental record, which has included the dumping of billions of gallons of benzene-laden toxic waste into freshwater streams and rivers in northern Ecuador, Telesur reported.

Environmental groups announced that the American energy firm had won the Public Eye award at the World Economic Forum in Davos, Switzerland on Friday. The award, which aims to highlight 'the world's worst corporations', is voted on by internet users. This year, Chevron handily beat out Glencore, Goldman Sachs, Gazprom, Dow Chemical, and Walmart. This is the second time Chevron has been bestowed the dubious honor, first having receiving the award in 2006, also over environmental pollution in Ecuador, hence the "Lifetime Achievement" moniker.

To add insult to injury, the company has refused to pay a $9.5 billion US fine which an Ecuadorian court levied on it in 2011 to reflect the expense of clean-up costs and damages. Not all of the costs associated with its dumping of toxic waste can be measured in dollars and cents: Chevron's activity is also said to have decimated five indigenous communities; 2,000 locals are estimated to have died from leukemia and other cancers and another 10,000 estimated to be at risk. The dumping has resulted in the contamination of surface water, groundwater, as well as food and air. Rather than pay the fine, Chevron decided to sell off its assets in the country and leave the country altogether. The company's chief lawyer for the case has vowed that he would fight the court's decision "until hell freezes over, and then we'll fight it out on the ice," environmental and corporate social responsibility news site CSR Wire explains.

In addition to the controversy in Ecuador, the firm has faced environmental, worker safety, and legal intimidation scandals around the world, from Angola, to Bangladesh to Poland, and inside the United States itself.