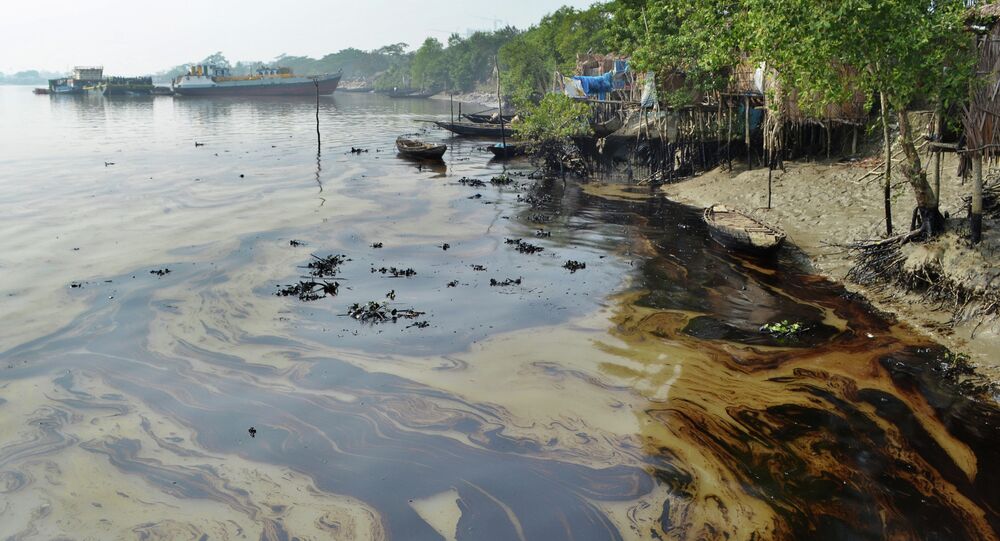 Bangladeshi authorities are desperately trying to diminish the devastating consequences of an oil spill in the Sundarbans, using manual labor to clean up the leak. India is on a high alert due to the ecological catastrophe.

MOSCOW, December 13 (Sputnik), Ekaterina Blinova - Bangladeshi authorities are desperately trying to diminish the devastating consequences of an oil spill in the Sundarbans.

"After help from locals, the forest department has started using manual labor to clean up the oil spill in the Sundarbans. Chandpai Forest Range Station Officer Abul Kalam Azad said that 50 boats and trawlers, with at least two laborers in each, have started removing the oil," the Bangladeshi bdnews24.com media source reported.

According to the news outlet, the locals have already collected about 7,200 liters of the 350,000 liters of the oil spilled into the Shela river. The state-run Padma Oil Company is paying them 30 Bangladeshi Taka ($0,39) per liter.

"The laborers will remove oil and other oil stained materials like leaves and branches from Joymoni to Harintana area of the Shela River," Abul Kalam Azad said as quoted by the media outlet.

Bangladeshi civilians are making every effort to clean up the spill, which poses a serious threat to the unique Sundarbans mangrove forest, as well as to rare dolphins, estuarine crocodiles, Bengal tigers and other wildlife. The disaster was caused by a collision between a ship and a tanker three days ago.
Seven members of the tanker's crew have been found while the captain is still missing. The Bangladeshi authorities have filed a lawsuit against the owners of both vessels.
Meanwhile, India's eastern coastal authorities have signaled a high alert due to the ecological catastrophe.

© Flickr / Patrik Jones
Bangladeshi Ecological Catastrophe Threatens Rare Dolphins, Bengal Tigers
"We are taking all precautionary measures," Pradeep Vyas, additional director of India's Sundarban Biosphere Reserve, said as quoted by Reuters, adding that the Indian Coast Guard and Border Security Force are observing the situation and patrolling the rivers linked to the Sundarban region.
Ujjwal Kumar Bhattacharya, the chief warden of West Bengal, claimed that the spill had not yet affected the tiger reserve territory or a wildlife on the Indian side of the border.

"It may happen, and if it happens we have to deal with it," said Ujjwal Kumar Bhattacharya, as cited by Reuters.
The ecological catastrophe sparked a heated debate in social media sources with users bemoaning the impact on Sundarbans' wildlife and blasting the Bangladeshi authorities.

Mockery of the responsible Minister - This oil spill will not harm #Sundarbans !!! #SaveSundarban pic.twitter.com/u973HaJDGL