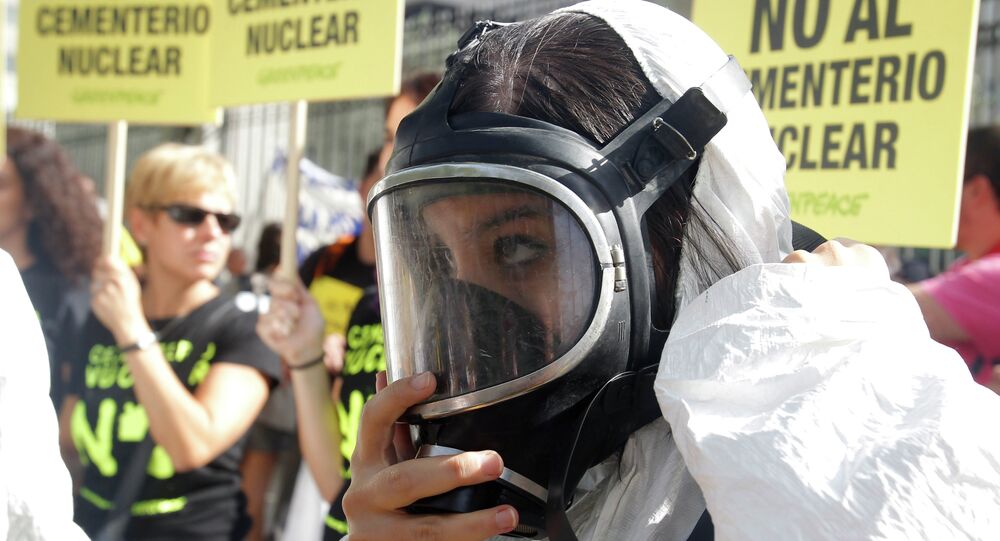 Sixteen Greenpeace activists and photojournalist Pedro Armestre are facing up to three years in jail for their protest at Spain's nuclear plant, that took place in February 2011. Greenpeace has launched a #Confrentes 17 campaign protesting against 'the harshest trial in 30 years of peaceful activism in Spain‎”.

© Wikipedia /
Greenpeace to Fight for Release of Arctic Sunrise Arrested in Spain
MOSCOW, December 4 (Sputnik) — Sixteen Greenpeace activists and a photographer are facing up to three years in prison for their protest at the Spanish Cofrentes nuclear plant in February 2011.

According to the media source, the members of Greenpeace organization burst into the Confrentes plant on February 15, 2011, climbed up one of the cooling towers and painted "Peligro Nuclear" ("Nuclear Danger") on it.

"Greenpeace's message is nuclear power is an obsolete, dangerous and expensive energy source. We advocate a 100% renewable energy model which is not only sustainable but also creates jobs," the organization's official statement published on its website reads.

Tried on Thursday, December 4, in the city of Valencia, the activists may receive a two years and eight month prison term, the media outlet underscores, adding the sentence "would be the toughest penalty ever handed to Greenpeace activists in Spain."

Iberdola, the Confrentes nuclear plant's owner, has also accused the activists for clashing with plant's security servicemen, saying that one guard was wounded by an electric saw while another "was hurt in the head."

Dismissing the allegations, Greenpeace refers to Article 5 of the Spanish Constitution that states that a person has the right to "enjoy an environment suitable for the development of the individual as well as the duty to preserve it."

Pedro Armestre, a photojournalist arrested with the Greenpeace group in Spain, insists that he was taking part in the event only as a professional photographer. "This trial aims to blindfold the person who wants to show what is happening," he said as cited by Agence France-Presse.

On November 19, Greenpeace has launched a #Cofrentes17 campaign, beating the environmental drum and urging the Spanish authorities to free the activists.

"Is punishing the painting of a cooling tower with jail fair and proportionate? Defending the environment should not carry a cost that is higher than for destroying it," says the statement of Greenpeace.