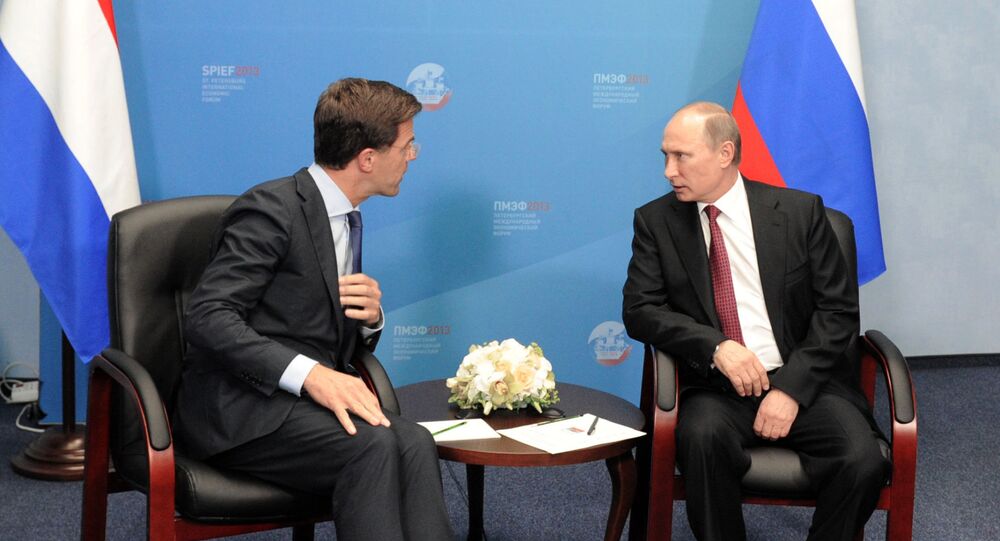 Dutch Servitude to the US Explained

"I will not participate in a meeting with Vladimir Putin", Dutch Prime Minister Mark Rutte said in response to a proposal by France and Germany to hold a summit with the Russian president.

No surprise there. "The Dutch serve as a vital anchor in Europe", an American ambassador to The Hague once put it. "They counter Franco-German efforts to steer Europe off a transatlantic course".

Last week, European Union leaders failed to agree on a proposal by France and Germany to hold a summit with Russian President Vladimir Putin. It was reported in the media that the main opponents of this summit were Poland and the Baltic countries - Estonia, Latvia, and Lithuania.

But The Netherlands was among them too. Although Dutch Prime Minister Rutte said he would not mind if the German and French leaders met with Putin, he sent out a strong signal by saying he would not participate in such a meeting.

When a reporter asked what his reason was, he replied: "MH17". In 2018, an international team of criminal investigators led by the Dutch accused the Russian Federation of having delivered the surface-to-air missile system that shot down Flight MH17 in 2014 while it was flying over a war zone in eastern Ukraine. All 298 passengers and crew died, most of them Dutch citizens.

Rutte Put to Shame by Putin

There's no doubt the MH17 air disaster damaged bilateral relations between Russia and The Netherlands. But it seems other factors are at play as well. In April 2013, on a visit to The Netherlands, Putin was criticised by Rutte about the Russian federal law "for the Purpose of Protecting Children from Information Advocating for a Denial of Traditional Family Values", nicknamed the "Gay Propaganda Law".

Putin then put Rutte and The Netherlands to shame by mentioning that there was a party in the Dutch parliament that did not permit the participation of women and that the Dutch legal system permitted an organisation that propagated paedophilia.

Something that Putin didn't mention was: Rutte's political party, the VVD, has a track record of trying to get abnormal sexual activities accepted. In the 1970s and 1980s, the VVD pushed for dropping legal restrictions on having sex with children under the age of 16.

In 1993, the youth movement of the VVD - the JOVD - declared that it should be allowed to have sex with animals. Rutte was chairman of the JOVD from 1988 until 1991. It is not known what his thoughts are about bestiality and paedophilia, but he must certainly not have liked the way Putin countered his critique of the Gay Propaganda Law.

Dutch Anchor for US in EU

It seems like the US uses The Netherlands as a tool to keep Germany and France from any initiatives to improve the EU's relationship with Russia. Founder of the US think tank Stratfor George Friedman once explained: an alliance between Germany and Russia would be a threat to US dominance. "For centuries", the US has tried to prevent this from happening, he said.

In 1941, after Germany invaded the Soviet Union, then-US Senator and later President Harry Truman said: "If we see that Germany is winning the war, we ought to help Russia; and if that Russia is winning, we ought to help Germany, and in that way let them kill as many as possible".

© REUTERS / Ints Kalnins
Netherlands' soldiers attend a ceremony to welcome the German battalion being deployed to Lithuania as part of NATO deterrence measures against Russia in Rukla, Lithuania February 7, 2017

The Dutch authorities are known for their servitude to The United States. In 2017, I interviewed Harry van Bommel of the political party SP, who at the time had been a member of parliament from 1998 on. I asked him if The Netherlands had ever said "no" to any request coming from Washington. He couldn't think of a single example.

"The Dutch serve as a vital transatlantic anchor in Europe", US ambassador to The Hague, George Sobel, wrote in his farewell address in 2005. "As one of the original six EU members, the Dutch ally with the British to counter Franco-German efforts to steer Europe off a transatlantic course. (...) Strengthening US-Dutch ties across the political spectrum is necessary to ensure that the Dutch continue to enlist others to pursue interests in line with the US".

How does the US ensure that the Dutch continue to enlist others to pursue interests in line with the US? For one, the US does not shy away from blackmail to make European governments act in its interests.

At least, that is the experience of Professor Werner Weidenfeld, who coordinated relations with the US for 12 years for the German government. "If we disagree with the Americans on a serious issue, they put intelligence material on the table, compromising for Germany, and they say: 'Either you co-operate or you are finished'", Weidenfeld declared.

In 2017, Roger Stone, who served as an adviser to Donald Trump's 2016 election campaign, reported on Twitter that Trump's security adviser Michael Flynn was in possession of a list of paedophiles in high places, and that publication of this would cause a stir. He accompanied his tweet with the tell-tale hashtag "The Netherlands". The list was never published, much to the disappointment of some among my fellow countrymen who had pinned their hope on Trump's "drain the swamp" promise.

However, Stone's tweet doesn't seem to have been a slip of the pen. The American intelligence apparatus has indeed shown interest in the abuse of underage boys in The Netherlands. A former manager of a "boys' brothel", Charles Maasdam, who was sentenced in 1998 to four years in prison, declared to a reporter from a Dutch national newspaper that American intelligence people had gone through his entire customer base and that the Dutch intelligence service, the BVD, was not amused when it found out about this.

In recent years, a Dutch MP named Pieter Omtzigt was silenced over a child abuse scandal in The Netherlands by his own political party, the CDA. The person involved in the scandal was a member of Prime Minister Rutte's VVD and a high-ranking official at the Dutch Ministry of Justice and Security. It's been said that the CDA silenced Omtzigt at the behest of Prime Minister Rutte. On 12 June 2021, Omtzigt resigned from the CDA party, after nearly 20 years as an MP.