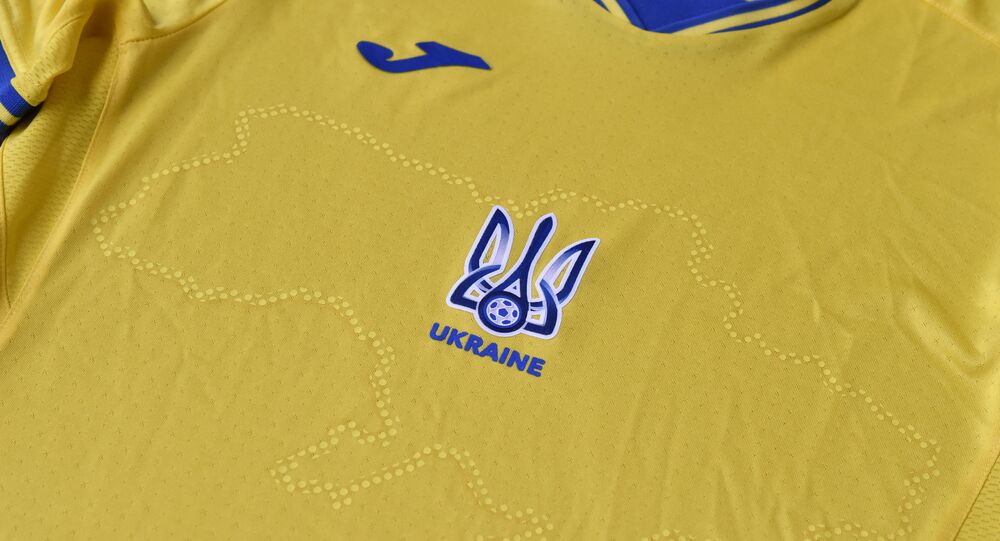 The clowns in the Western-backed Kiev regime excel at least at one thing. Political slapstick. Every time President Volodymyr Zelensky – a former TV comedian – and his regime make an announcement it’s like watching clowns slapping cream cakes into their own faces.

The latest gaffe is the unveiling of Ukraine’s national football kit for the UEFA European Championship, which is emblazoned with a Nazi-era slogan: “Glory to Ukraine! Glory to Heroes!”

The soccer tournament kicks off this week and lasts for a month drawing in global TV audiences who will no doubt be given something to think about regarding Ukraine’s dark and dirty past as a Nazi accomplice. And that past is very much alive in the present as demonstrated by the new football kit and its “Glory to Heroes” slogan. How the Western supporters of the Kiev regime must be cringing.

This was the rallying call of the Ukrainian paramilitaries led by Stepan Bandera who collaborated with the Nazi SS during to the Second World War to exterminate millions of their compatriots as well as Russian people.

The slogan was revived by the Neo-Nazi militants who seized power in Kiev in 2014 after a violent coup d’état against an elected president who had maintained friendly relations with Russia. The coup was crucially backed by the United States and European Union. Indeed, the CIA is implicated in the false-flag sniper shootings against scores of protesters and police officers in Maidan Square on February 20, 2014, which were blamed on the incumbent government, and the event as falsely reported by Western media was pivotal in overthrowing the existing authorities.

© AFP 2021 / HANDOUT
Blinken Says US Will Continue to Provide Defence Support to Ukraine
Thus the Western powers, who constantly proclaim to uphold democracy and rule of law, helped bring back fascism to the European continent through their support for the Kiev regime.

And no wonder the ethnic Russian people of Crimea subsequently voted to secede and join the Russian Federation in the weeks after the coup that brought Banderites to power. Crimean people suffered terribly under the Nazis and their Ukrainian death squads. The same goes for the people of Ukraine’s southeast Donbas region around Donetsk and Luhansk who have refused to recognize the legitimacy of the Kiev imposters and have established their own autonomous republics. The breakaway republics are constantly shelled by Kiev’s military in violation of a supposed ceasefire.

Western governments turn reality on its head and accuse Moscow of “annexing” Crimea – an ancient part of Russia that voted democratically in a referendum to join the Russian Federation. The West also accuses Russia of covertly invading and destabilizing Ukraine when it is Washington that has supplied the Kiev regime with over $2 billion in arms since 2014 and NATO troops are actively collaborating on the ground with Ukrainian forces in their offensive against the people of Donbas.

The Western media have assiduously avoided reporting on the stark reality of Neo-Nazi ideology popular among Kiev’s politicians and its various military formations. The Azov Battalion is openly a modern-day reincarnation of the Ukrainian fascists who glory in Nazi past crimes. But Western media never report on these sordid links of a regime supported by the United States, the EU and NATO.

However, embarrassingly for the Western patrons, the Kiev clowns just put their faces into foam cake by unveiling a football kit that makes the Nazi legacy explicit to a global audience.

This is just the latest example of how the bozos in Kiev can’t help falling over themselves with their own stupid logic and arrogance.

Take another: the reason why Kiev says the Nord Stream 2 project should be stopped. This is the pipeline under the Baltic Sea supplying natural gas from Russia directly to Germany, thereby reducing the dependence on Ukraine as a transit route for the fuel.

President Zelensky made the absurd remark recently with a straight face that reduced transit fees paid by Russia would prevent the Kiev regime from maintaining its armed forces. The intended implication being that Ukraine would be under-defended against alleged “Russian aggression”.

It doesn’t get more ludicrous than that. The Kiev regime that the West installed in 2014 has done everything to impede the regular flow of gas from Russia to Europe. That’s because of its monopolistic position of having pipelines across its territory to Europe and also because of its anti-Russian hostile ideology. Now that Russia has legitimately reduced its dependence on the Ukrainian land route by opening up the Nord Stream 2 pipeline, the Kiev regime is complaining about losing out on billions of dollars worth of transit fees.

And then, twisting the cream cake on his face, Zelensky is further claiming that the financial loss will curtail spending on Ukraine’s army and Neo-Nazi paramilitaries who are relentlessly shelling the Donbas region and thwarting any possibility of finding a peaceful settlement to the seven-year civil war.

Kiev’s comedian-turned-president wants Russian money to fund aggression against ethnic Russian people, and to continue a conflict that is endangering peace in Europe.

Who needs smart Russian “propaganda”, when the West and its circus troupe is so self-indicting?