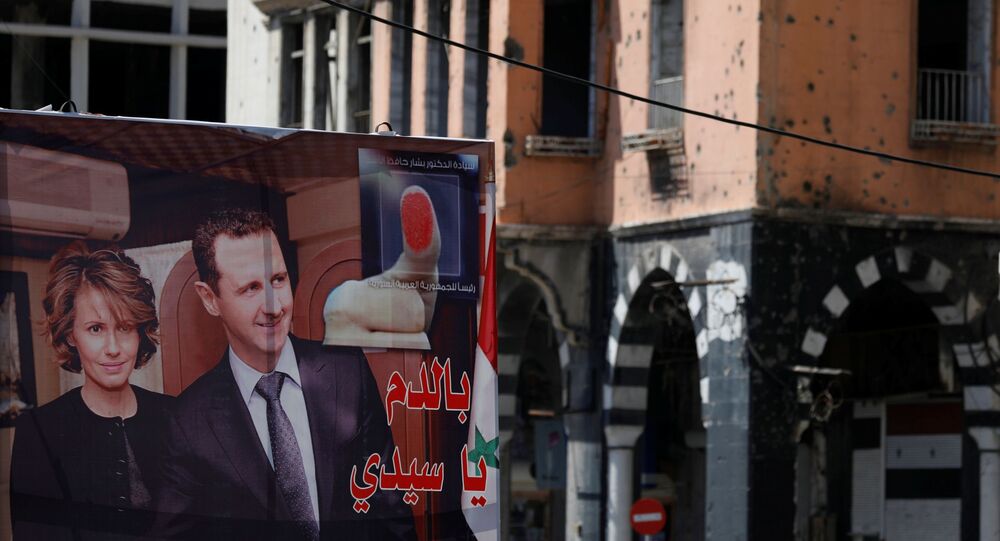 Syria’s presidential elections this week were a resounding success against a backdrop of 10 years of brutal, relentless war imposed on the Arab country by the United States and its NATO partners.

After a decade-long torment from terrorist mercenaries deployed covertly by the Western powers, as well as overt aggression from NATO military forces illegally attacking the country and from cruel economic sanctions warfare, the people of Syria remain defiant and independent.

President Bashar al-Assad was re-elected for a fourth seven-year term after winning 95 percent of votes cast. The achievement is stunning. It completely refutes – indeed makes a mockery of – the Western narrative depicting Assad as a “tyrant”.

Despite all the grueling hardships, the Syrian people turned out in droves to vote on Thursday. The turnout was over 78 percent with more than 14 million votes cast out of an eligible 18 million electorate.

© REUTERS / Omar Sanadiki
Videos: Bashar Assad Wins Syrian Presidential Election With 95.1% of Vote
There is no way the Western governments and their servile corporate media can spin this epic demonstration of popular defiance to their nefarious intrigues for regime change in Syria. Hence, the total silence among Western media about the election result. That silence is at once hilarious and damning of Western guilt over the real nature of the war in Syria.

It was always a foreign war of criminal aggression. If there was any justice prevailing in this world, Western politicians by the dozens should be tried for war crimes.

Before the election this week, the United States, Britain, France, and other NATO powers tried to smear the Syrian democratic will, labeling the ballot as neither fair nor free.

Well, the sheer numbers of people turning out to vote and the subsequent scenes of jubilation across Syria tell another story, one that confounds the Western propaganda and exposes the criminality of the NATO powers and their toxic media.

The Syrian nation has refused to bow after years of NATO-backed terrorism in their country. They have chosen their president – again.

© REUTERS / Omar Sanadiki
Supporters of of Syria's President Bashar al-Assad celebrate after the results of the presidential election announced that he won a fourth term in office, in Damascus, Syria, May 27, 2021.

Not one Western mainstream media outlet has followed up to report on how Syrians feel about being liberated and of having their peaceful lives restored. That’s because Syrians would praise the leadership of Assad, the courage of the army, and the crucial help of Russia, Iran and Hezbollah. In other words, the West’s lies would be demolished by the truth, and so their media are compelled to ignore and keep silent.

© AP Photo / Syrian Presidency Facebook
Bashar Assad Marks 20-Year Anniversary as President, but Syrian War Shows No Signs of Dying Down
For everyone around the world who desires justice and peace and the defeat of imperialism, the victory from Syria’s election is a glorious day to celebrate. Congratulations are due to President Assad. But more so to the people of Syria who showed that it is possible to stand up to the real tyranny, that of the United States and its lawless NATO rogue allies who wanted to destroy Syria in order to install their own puppet regime. Despite unspeakable barbarities inflicted on the peace-loving people of Syria, they have remained steadfast in their unity and determination for independence, regardless of their different religions.  The NATO ploy of trying to incite a sectarian war among Syrians failed because they knew all along who their real enemy was.

For those willing to see reality, Syria exposes the forces of evil in this world. The Western lying media tell us that Russia, China, Iran, Venezuela, and so on, are “bad” and are threatening global peace. The Americans and their NATO partners lecture and pontificate about “rules and order”. When it is they who are caught in the headlights of truth: they tried to destroy a country just like they have countless others. But that country – Syria – just showed its spectacular strength to overcome the evil designs of the United States and its minions in NATO.

Lamentably, Syria faces more trials and challenges from the continuing economic warfare being waged by US and European sanctions. Reconstruction from a decade of NATO aggression will not be easy. But with the help of Russia, China, Iran, and others, the Syrian people will win finally. They have just shown their invincible resilience beyond any doubt.