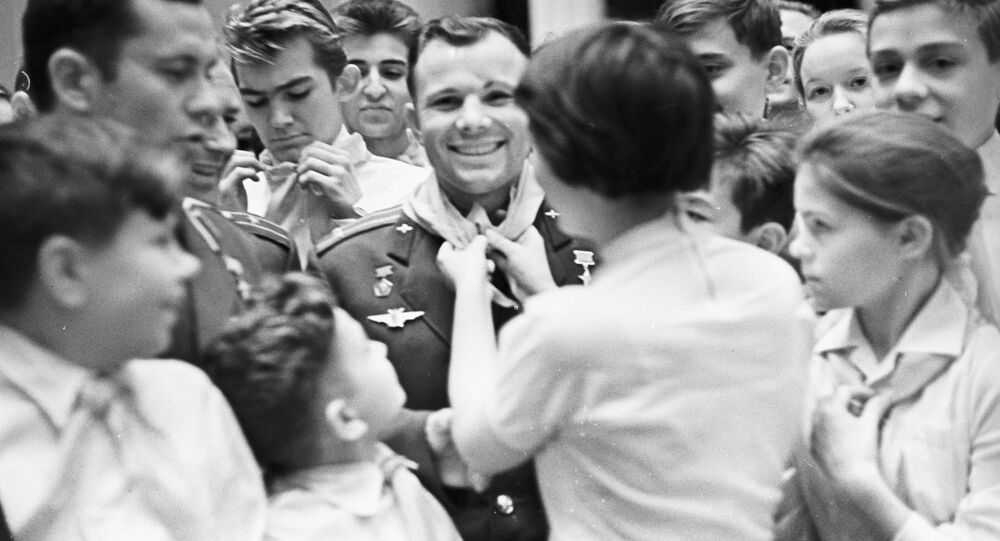 Exactly sixty years ago this week science fiction became reality, when Soviet cosmonaut Yuri Gagarin made history by becoming the first human being to enter space.

‘I think this is one of the greatest achievements in the history of mankind’ was the verdict of the British astronomer Sir Bernard Lovell.

Yuri Gagarin’s journey into space on the Vostok 1 spacecraft (he completed a full orbit of the earth in one hour forty-eight minutes) was a stunning achievement for Soviet science, one which gripped the imagination of the entire world.

The idea of space travel had, after all, fascinated mankind for generations. In his 1865 novel ‘From the Earth to the Moon’ the French author Jules Verne fantasized about a massive gun rocket which could propel people inside a projectile into space. Space has always seemed- to use the opening phrase of a popular sci-fi series- the final frontier.

© Sputnik / Yuryi Abramochkin
Yuri Gagarin: A Look Back at the First Man in Space
18
And on 12th April 1961, that ‘final frontier’ was conquered.

Sixty years ago, the Soviet Union certainly appeared to have the edge in the Cold War ‘space race’ with the USA.

Inspired by the ideas of the great Russian rocket scientist Konstantin Tsiolkovsky, in 1957 the Soviets had launched Sputnik 1, the first man-made object to orbit the earth (after which the Sputnik media organisation was named). That same year, a dog named Laika from an animal shelter in Moscow would make headlines by becoming the first animal in space - taking off in Sputnik 2.

Four years later, the ‘Workers State’ had beaten its ‘capitalist’ rivals and put the first man into space.

Gagarin, who had not attended university, and whose parents had worked in a collective farm (kolkhoz) expressed with a wonderful simplicity what he saw from above the Earth. “Orbiting Earth in the spaceship, I saw how beautiful our planet is. People, let us preserve and increase this beauty, not destroy it!” he later wrote. Years later Gagarin’s daughter Yelena told of her father’s love of books:

“He knew Pushkin very well, and Tvardovsky and Isakovsky – poetry connected with the war. He liked a great deal of literature: Lermontov and Saint-Exupery, for example… He was curious and interested in everything."

The man who loved 'The Little Prince', made a safe landing in a field near Saratov, a city in southern Russia. A five-year-old girl Rita Nurskanova, was out planting potatoes with her granny. At first they were frightened by the man approaching in an orange space suit, but he sought to reassure them that he was a friend and not a foe. When the grandmother asked where he had come from, Gagarin replied ‘I came on a ship’. When the grandmother said ‘There’s no sea near here. What ship? Gagarin replied ‘I came from the sky’.

He returned home to a richly-deserved hero’s welcome.

‘When Gagarin came down there was a tremendous reception in the Great New Palace in the Kremlin’ recalled Sir Frank Roberts, British Ambassador to Moscow. ‘There must have been about six thousand people to celebrate all this’.

Even British Conservative politicians were impressed.

“Forty years ago the Soviet Union was a backward country, poor, illiterate, agricultural. Today she is identified with prodigious feats of science and technology,” enthused Aubrey Jones in the Sunday Times.

Gagarin was driven through the streets of Moscow, with the Soviet leader Nikita Khrushschev beside him. With his cheerful personality, boyish looks and ready smile, the first man in space became a hero not just in his home country but throughout the world. Enjoying a popularity more associated with film stars, Gagarin embarked on a world tour. This included a visit to England in July 1961, where he was invited to lunch with the Queen and Prince Philip at Buckingham Palace. As he was driven by Rolls Royce, with a VIP escort, from Heathrow Airport to the Russian Embassy, large crowds came out to greet him. ‘London went wild and thousands crammed the streets to pay homage’, the Aberdeen Evening Express reported.

© Photo : Twitter / @RoyalFamily
'Russian!': UK Queen Elizabeth Jokes Recalling Meeting the First Human in Space Yuri Gagarin
Even in the rain, he was mobbed wherever he went. ‘It is hard to imagine the star quality that Gagarin carried’ writes space author Francis French. ‘In fact, it had more in common with Beatlemania than the later, formal visits of other space farers’.

It’s interesting - reading the old press cuttings- to compare the widespread goodwill there was in the west towards Gagarin and the Soviet Union in 1961, with the toxic Russophobia of today- when, as this excellent piece by James Woudhysen for Spiked points out, Russia can do nothing right. What’s the difference? Well, sixty years ago, pro-war Russophobic hawks were not so embedded in governing circles and elite media, and doing their absolute worst to poison east-west relations and prevent ‘détente’.  Life was far happier without these people.

Gagarin - having been cheered across the globe - became an official ‘Hero of the Soviet Union’ and was promoted to be a Lieutenant Colonel and later Colonel in his country’s Airforce.

Sadly his own story was to have a tragic postscript. In March 1968, the first man in space was working as a training director. He took off with flight instructor and celebrated test pilot Vladimir Seryogin in a MiG-15 jet fighter and both men were killed instantly when the plane crashed into a forest. Gagarin was just 34 when he died.

‘It was ironic that, after facing the immense hazards of the first-ever space flight, he should have been killed, in 1968, in an air crash on earth’,  writes Robin Kerrod in the Concise Encylopedia of Science.

The Soviet Union- and the entire world- mourned.

Gagarin and Seryogin were buried in the walls of Red Square in the Kremlin.

Questions were soon being asked as to how the two men had been killed in what was a routine exercise.

Numerous theories were put forward in the years that followed, but in 2013, Aleksey Leonov, the famous cosmonaut, and the first man to walk in space, told RT that crash was caused by an unauthorized SU-15 fighter flying too close to Gagarin’s plane.

“In this case, the pilot didn’t follow the book, descending to an altitude of 450 meters [1,475ft]. I know this because I was there; I heard the sound and talked to witnesses. While afterburning the aircraft reduced its echelon at a distance of 10-15 meters in the clouds, passing close to Gagarin, turning his plane and thus sending it into a tailspin – a deep spiral, to be precise – at a speed of 750kph,” Leonov said.

Whatever the cause of Gagarin’s fatal accident, it was a sad and untimely end to a man who was the greatest icon of the space age- an era, which as I noted in an earlier Sputnik article, was a time of great global optimism.

© Sputnik / Vladimir Astapkovich
A Rocket to the Moon! Remembering the Space Race Fifty Years On
It’s worth remembering that the Soviets not only put the first man into space, but in 1963 sent the first woman there too - Valentina Tereshkova. But at the end of the decade, and just one year after Gagarin’s death, the US struck back, by putting Man on the moon. Since then we’ve had the Viking probes to Mars, the first orbit round Venus, the launch of the Space Shuttle and the setting up of the International Space Station.

Nothing though has quite matched the excitement felt throughout the world when Yuri Gagarin made his historic journey sixty years ago. So let’s raise our glasses this week to toast the very brave man from Klushino, the ‘Cosmonaut who never stopped smiling’ and what he and the Soviet scientists achieved.