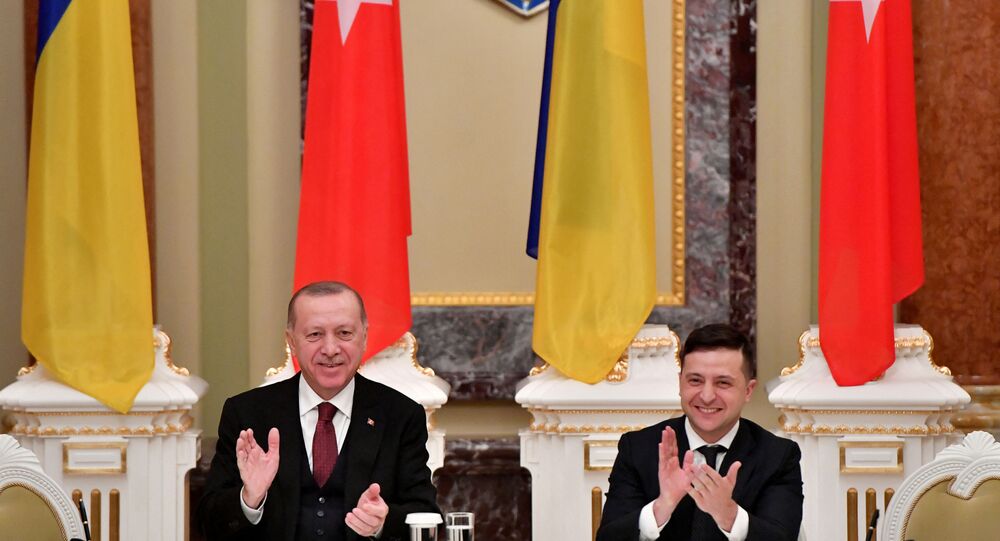 Russia is right to be alarmed. Just as violence flares in Eastern Ukraine – on Russia’s border – it emerges that Turkey is supplying attack drones to the Kiev regime which can only make the conflict more explosive.

There are real fears that the US-led NATO military alliance and Russia may become embroiled in a wider war. There seems little doubt that the Western-backed regime in Kiev is intent on escalating the seven-year war in Eastern Ukraine for its perceived advantage by getting NATO powers involved.

In recent weeks there has been a constant campaign of artillery shelling by Ukrainian forces under Kiev’s command against civilians centers in the breakaway eastern region. The latter is mainly populated by ethnic Russians who repudiated the Western-backed coup d’état in February 2014 which brought the current Kiev regime to power. The regime launched a military offensive against the eastern Donbass which has continued for seven years, albeit a low-intensity campaign of hostility.

The ethnic Russian separatists have succeeded all the while in holding back the Kiev forces with admirable courage and tough military defenses. Russia denies it is involved in on-the-ground military support for the separatists but Moscow does provide political and humanitarian backing for the people who have been under merciless siege by Kiev’s forces, many of whom comprise Neo-Nazi militia who despise Russian culture just as their genocidal forbears did during the Second World War and the Third Reich’s Final Solution.

Now with Turkey getting involved in the war, the conflict is set to escalate.

This rhetorical intervention by Turkey in the Ukraine war has been accompanied by an increase in supplies of warships and drones to the Kiev regime.

Russia’s Foreign Minister Sergei Lavrov was prompted to warn against moves by NATO powers, including Turkey, which are fomenting a more militaristic stance by Kiev. Under the 2015 Minsk peace accord, the Kiev regime is obligated to grant autonomy to the Eastern region. This has never been implemented and it seems evident that Kiev is moving to outright reject Minsk by ramping up the military campaign.

The intervention by Turkey is reminiscent of the war last year between Azerbaijan and Armenia over the disputed Nagorno-Karabakh territory. It was the supply of drones and other military equipment by Turkey which gave Azerbaijan a decisive upper hand. That conflict on Russia’s southern border was also a cause for alarm in Moscow over its security. It was only through Moscow’s judicious mediation that the four-month war was eventually tamped down.

It seems that Turkey’s Erdogan is flexing his muscles again to expand his influence over the Black Sea and Caucasus regions, this time by supplying “game-changing” drone technology to the Ukrainian forces under Kiev’s command.

It is obvious that Turkey’s latest involvement in the Ukraine conflict has caused Russia much consternation. After all, Russia has at times hailed friendly relations with Ankara, and vice versa. Yet here is Ankara trying to make gain at the expense of potential Russian pain.

Only recently, Russia further extended the sale of its S-400 advanced air defence system to Turkey. That strategically important deal provoked anger in Washington and other NATO members. But Erdogan snubbed Western objections and went ahead with the S-400 purchase.

The mercurial Turkish president has been riling up European leaders over issues to do with Islam, migration, and human rights. Last week, there appeared to be a calculated insult by Ankara when European Commission President Ursula von der Leyen was shunted to take a backseat during a summit.

Wily and irascible, Erdogan has a knack for wrong-footing a lot of world leaders and appears to harbor grudges. It may be safely surmised that the Turkish leader never really forgave Russia for its military intervention in Syria at the end of 2015 which turned the tables on Ankara’s criminal ambitions for eliciting regime change in Damascus.

Turkey’s incendiary intervention in the Nagorno-Karabakh conflict last year seems to have been calculated revenge.

So, too, is Erdogan’s power play in the Ukraine. If that war flares up, then Moscow will be put under immense pressure to protect ethnic Russians in Donbass coming under fire. If Russia makes that move then the Western media will portray it as “Russian aggression” against Ukraine. The latter has already got Washington and NATO’s support. The upshot could be a catastrophic escalation.

Russian President Vladimir Putin is renowned for his ability at geopolitical chess playing. But what happens when you play chess with someone like Erdogan who is a ruthless backstabber?