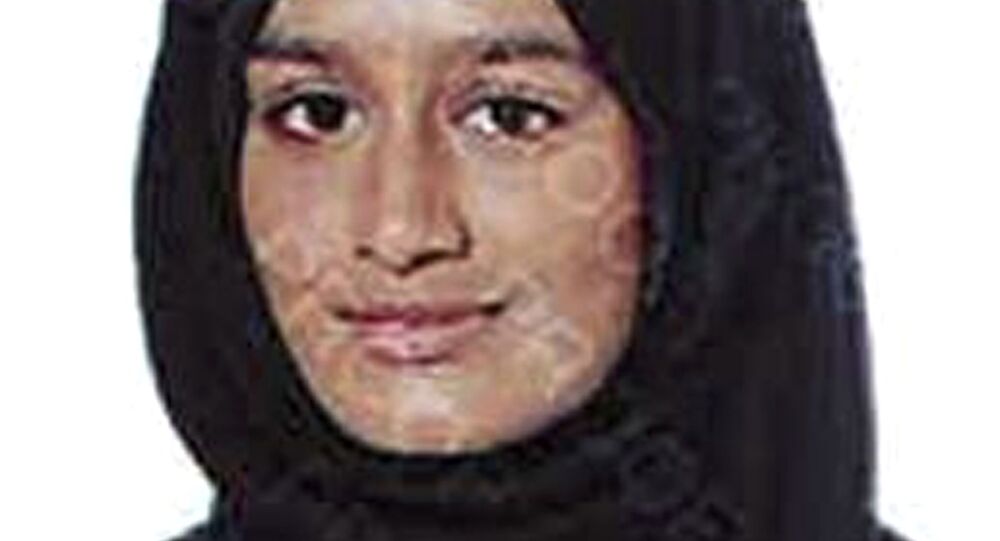 No Way Back for Shamima!

Shamima Begum is not coming back to the UK! This is brilliant news. Let’s hope that this decision by the Supreme Court sends a clear message to all wannabe traitors that there will be no way back to the UK if you join our enemies.

However, it’s true to say that the biggest reaction to this decision is one of complete surprise.

Surprise, that the judges have sided with the decent silent majority of the UK who want the protection of us and our fellow citizens prioritised above and well beyond the ‘rights’ of someone who ran off to be with a terror group committed to destroying our very way of life.

© AP Photo / Metropolitan Police
UK Supreme Court Rules Schoolgirl Who Joined Daesh Should Not Be Allowed to Return to Britain
Let’s hope that this decision heralds a new dawn where the rights and safety of the majority will always be put ahead of the ‘human rights’ of the terrorists and their supporters.

However, I won’t be holding my breath, will you? As the cliché goes, one swallow does not make a summer!

We shouldn’t  forget that there are over 150 terrorist traitors also trying to get a pass back into the UK and many others who have been allowed back already.

I have been calling for a new law for treason for years and when Sajid Javid was Home Secretary he talked a lot about introducing one but still we wait.

Anyone who leaves our country to fight for or support our enemy should immediately lose their citizenship as they climb the steps of the plane at Luton airport.

If they want to go and live or fight for a caliphate which stones women to death, throws homosexuals off buildings and beheads charity workers, then please go ahead with our blessing.  I will even pay for the plane ticket, but please don’t think you can hold on to your passport or citizenship.

Within minutes of today’s  decision though the ‘Yuman rights leeches’ were all over the news bleating about the fact that she was a child of 15 when she left London with her two mates and that she had been groomed!

I find this grooming accusation or excuse deeply offensive to the thousands of young women who were actually groomed by largely Pakistani Muslim men in most of our major cities.

She was not groomed or brainwashed. She left of her own volition, and likewise the nonsense that she was only cooking and did the washing up for the beheading scum is total hogwash.

Remember when the press first found her in the refugee camp she talked about seeing severed heads in dustbins whilst simultaneously telling us that she was pregnant again after already losing two babies.

Her story changed and her image as a victim was only developed once the lawyers got involved.

© Photo : Pixabay
Shamima Begum 'Made Her Bed & Now Has to Lay In It' – People Have Their Say on Twitter
Human rights groups are already claiming that today’s decision ‘sets an extremely dangerous precedent’ and are accusing the government of abandoning jihadi brides in ‘a legal black hole.’

No, you Guardian reading uber-liberals, you are wrong. Traitors like Shamima put themselves in the black hole when they rejected our liberal democracy in favour of the head chopping, gay hating, fundamentalist, mentalists’ idea of paradise.

If she had been allowed back into the UK to fight her case she would have been a rallying point for the significant number of terrorists or terror supporting madmen who live amongst us.

At the last count I saw there were 23 thousand Brits who supported Islamic State and at least 3,000 who wished us harm already living in the United Kingdom.

This is why she was a threat to national security.  She would have been turned into some kind of martyr.

Sajid Javid and Priti Patel should be congratulated for their tough stance on this issue but we need more, much more of this attitude.

Let’s have that treason law as quickly as possible now that we are meant to be a free sovereign state again.

Let’s get tough on those who preach extremism and hatred in whichever community they come from.

Let’s toughen our borders to stop illegals abusing our asylum or immigration system.

She added “The government will always take the strongest possible action to protect our national security and our priority remains maintaining the safety and security of our citizens.”

Fine words Priti but we now need urgent actions to back them up.