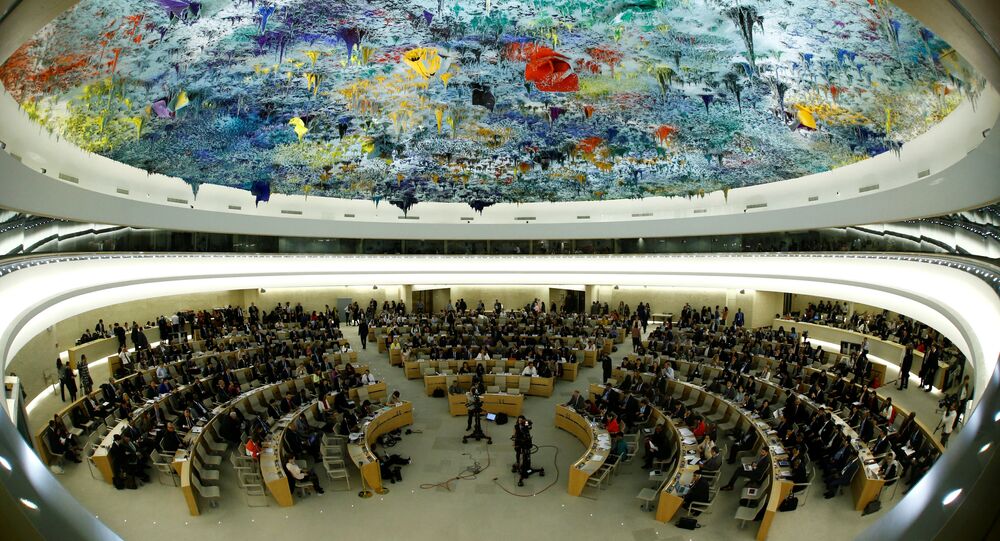 American and British diplomats excelled this week – even by their outrageous standards – in lecturing the rest of the world with nauseating hypocrisy.

The occasion was the annual gathering of the United Nations Human Rights Council in Geneva, which was addressed via video link by international delegates.

Beijing slammed Raab’s latest star-turn at smearing, pointing out that thousands of international observers, including UN rapporteurs, have on numerous occasions in recent years visited the northwest Xinjiang region where the Uighurs live and they have not found any evidence to substantiate the “genocide” claims that the British and American governments keeping harping on.

Furthermore, as a recent investigative report by Gareth Porter and Max Blumenthal at the Grayzone found out, the “genocide” claims made by the United States and Britain are based on a single source who happens to be an anti-communist ideologue who has never been to China, let alone the Xinjiang region.

Now, critics of American and British human rights abuses are customarily accused of engaging in “whataboutery”, which is allegedly distracting debate by throwing up counter-claims. But, you know, if certain parties are so outrageously hypocritical and arrogant to try to lecture others – as the Americans and British are wont to do – then they should be prepared to hear some realistic and pertinent criticism from both barrels.

British diplomats have refined the art of sounding moralistic and righteous with plummy accents. But it’s all a disgusting charade.

What right has a British minister got to level baseless accusations against China or any other nation when his own governments stand accused of waging genocidal wars in Iraq and Afghanistan?

On point too, a UN court ruling last month found that Britain has still not honoured a commitment to return the Chagos Islands to indigenous people after having driven these people from their homes in the Indian Ocean to make way for an American military base on Diego Garcia.

Can you believe the audacity of the British government to dare to lecture others given that background of criminality?

Russia’s foreign minister Sergei Lavrov introduced some reality into proceedings at the UNHRC this week when he rebuked Western nations for conducting heartless pandemic policies. Lavrov pointed out how many countries are suffering under the added weight of economic sanctions imposed by Western states. Those targets include Iran and war-torn Syria which have to endure US and European sanctions. Is that not barbarism at the highest level?

Next up in the hypocrisy-fest was Antony Blinken, the US secretary of state. He requested that the United States be readmitted to the UNHRC after former president Donald Trump pulled his nation out of the body in 2018.

Before even rejoining, however, Blinken was admonishing the UNHRC that it should eject members who are alleged violators of human rights. He didn’t specify which nations he was referring to, but the United States has previously complained about Russia, China and Cuba being members of the UNHRC.

Again, before opening his arrogant mouth, Blinken, like Raab, would do well to take a closer look at his own nation’s egregious record on human rights. How the United States has waged dozens of illegal wars and subversions, covert coups and genocidal campaigns with the use of armed invasions, aerial bombardments, and death squads all over the planet. Since the Second World War alone, the United States’ military operations, overt and covert, have resulted in an estimated death toll of at least 20 million people, from its genocidal wars in Latin America, to Africa and Asia.

As a senior member of the Obama administrations (2008-2016), Blinken is personally responsible for enabling US-sponsored wars in Libya, Syria and Yemen which have destroyed millions of lives.

What is most sinister about this record of death and destruction is the American and British perpetrators are apparently deluded about their moral righteousness. Otherwise how else could they not be ashamed or mortified from standing up in front of the world and uttering such hypocritical hogwash?