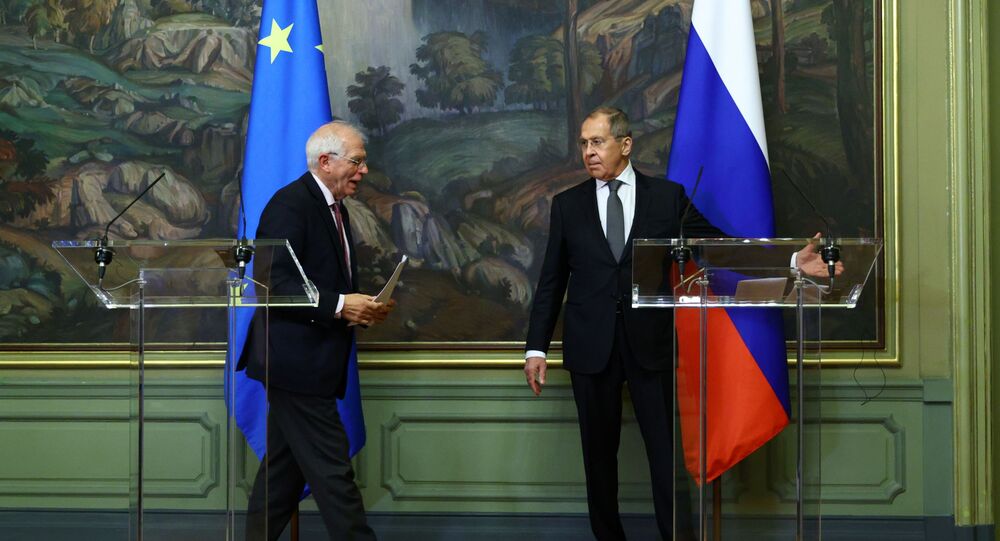 There’s nothing like a good dose of truth to get some people’s hackles up. Russian Foreign Minister Sergei Lavrov told the European Union it was “an unreliable partner” and then the floodgates of fury opened.

Lavrov was speaking to the European Union’s foreign affairs chief Josep Borrell while he was on an official visit to Moscow. It was a fair comment by the Russian top diplomat considering the facts of Europe’s servile deference to Washington’s anti-Russia policies, as well as the EU’s arrogant assumption to interfere in Russia’s sovereign affairs.

But the furious reaction to Lavrov’s remark alleged that Russia was “humiliating” the EU. The bloc is threatening to impose more sanctions on Moscow, to which the Kremlin has said it is ready to sever relations with the EU if it goes ahead with moves to damage the Russian economy.

Lamentably, Russia and the EU should be natural partners. After all, Russia is the largest country on the continent of Europe and there is huge trade flows between them, especially in the critical energy sector of Russian oil and gas.

However, since the EU enlarged its membership over many preceding years to the current number of 27 states, it can be adjudged to have acquired a more complicated, incoherent and feckless policy towards Russia. A major factor has been the membership of Poland and the Baltic states of Estonia, Lithuania and Latvia. Those states joined the EU in 2004 along with six others in what was the biggest expansion episode for the bloc.

Poland and the Baltic states are characterized by politics of intense animosity towards Russia, or what may be called Russophobia. The history of the Soviet Union, their collaboration with Nazi Germany, and the Red Army’s liberation of quisling states all contribute to a dominant reactionary politics in Poland and the Baltic countries. One which is marked by resentment and contempt for Russia.

It is notable that when Josep Borrell returned from his recent trip to Moscow it was mainly politicians from the above states who led the calls for his resignation and the imposition of more sanctions on Russia.

It is these countries which have pushed a whole host of anti-Russia viewpoints, including claims that Moscow has nefarious plans for aggression and posing as an imminent security threat. Washington has taken full advantage of this Russophobia to increase its influence over Europe. Poland and the Baltic states are big proponents of NATO force build-up along Russia’s borders. They also are vehemently opposed to further development of Russian gas supplies through the Nord Stream 2 project while touting for American alternative Liquefied Natural Gas, even though the latter would be much more expensive for consumers, industry and businesses.

The irrational antagonism towards Russia is such that politicians from Poland and the Baltic states are even opposed to the EU registering the use of the Sputnik V vaccine despite its proven efficacy and the outstanding supply problems for vaccinating the EU population. This obdurate mindset is tantamount to cutting your nose off to spite your face.

Mick Wallace, an Irish independent Member of the European Parliament, says the Polish and Baltic politicians are “obsessed” with spouting negative views about Russia. He says though that their influence on European policy is “zero” since France and Germany are the main drivers of policy. Nevertheless, they are an irritant in relations with Russia.

Historically, Wallace says the EU admitted those Eastern European states to its ranks for two reasons: to boost European corporate profits by accessing a pool of cheap labour; and, two, to facilitate the expansion of NATO and the all-important military-industrial complex.

But a “price” for these purported gains was the detriment it would produce for European-Russian relations.

This is reflected in European hypocrisy and duplicity. On the one hand, the EU needs Russia for fueling its societies and economies. On the other hand, anti-Russian bigotry and prejudices are given vent from reactionary, rightwing member states.

Moscow is right to tell the duplicitous Europeans they are unreliable.

Because they are. Reliably unreliable. It is not Russia which is seeking to sever relations. It is the European Union which has constantly undermined and thwarted relations. It takes two to tango.

And understandably Russia has got fed up with being constantly tripped by EU duplicity.