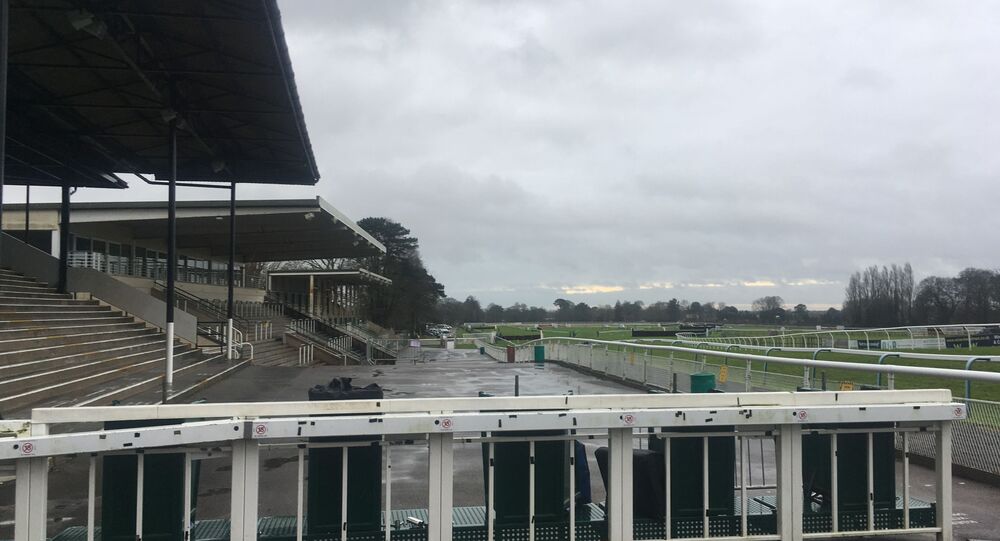 After a brief interlude when a limited number of spectators were allowed back in certain ‘tiers‘, sport in Britain is now back to being ‘Behind Closed Doors’, that’s if it’s allowed to take place at all. How longer can it survive under these restrictions?

Fontwell Park racecourse in West Sussex, on a wet Thursday in mid-January. It’s quite a good National Hunt card, and there’s some exciting racing, but sadly  there’s only a handful of people (trainers, racecourse officials and press), to see Lily the Pink just get the better of Kenny George is a pulsating finish to the 2m3f handicap hurdle.

Racing, like football and snooker is classed as an ‘elite sport’ and is still allowed to continue but only ‘behind closed doors’. The racing authorities, it must be said, have done a great job in keeping the show on the road, and avoiding the ultimate nightmare of there being no racing at all- which was the case between mid-March and early June last year. All courses have a ‘social distancing officer’. One-way systems around the track have been laid out. There are wash-basins and hand sanitisers in all the buildings. To date not one single case of Coronavirus/Covid-19 has been traced back to a racecourse.

Racing couldn’t really do any more but still there are grim, misanthropic lockdown hardliners who think we should have no sport at all at the present time (even though lockdowns don’t work on their own terms). As I argued in a previous column, it is absolutely essential that we don’t listen to the ‘lock everything down’ kill-joys, who seem to be on a mission to destroy everything in life that makes people happy- from spending Christmas with their loved ones to watching their favourite football team play.

© AP Photo / Andy Rain
The Sputnik Intelligent Punter's Guide To The 2021 FA Cup
Sport is not only essential for the economy (the contribution to the national coffers is around £40bn), it plays a key role in boosting people’s morale. And while it’s clearly not as good as having sport with fans in attendance,  behind closed doors action is still better than having none at all. Think of the millions (my Dad and I included), watching on tv who will have enjoyed  Ronnie ´The Rocket’ O’Sullivan’s tremendous comeback against Ding Junhui in the UK Masters snooker this week. What a match that was. Or last week’s third-round FA Cup action, when lowly Chorley and Crawley shocked their more illustrious opponents.

Lockdown lives, as dull as they are in any case, would be even more boring if we didn’t have football, racing, snooker and some rugby (the 2021 Six Nations is due to start on 6th February), to look forward to. But to save sport in the medium and long term we urgently need paying spectators to return, or at least fix a date when they will be allowed back (and not, it must be stressed, with ‘Vaccine Passes or ‘ Immunity Cards’ as a condition of entry, which would utterly wrong and discriminatory).

Let’s do the math. The Horserace Betting Levy Board has allocated increased funding  (£31.9m) for racing’s fixture list for the first four months of 2021.

After that though, things will really get tricky, if spectators don’t start piling through the turnstiles. Tickets for Royal Ascot 2021 are not currently on sale. Last year the Racecourse Association (RCA) revealed that while media revenue accounts for around 24% of racecourse income, spectators account for a far greater (47%) percentage.  ‘This further demonstrates the critical need to return crowds to racecourses—during 2020 all racecourses are having to deal with revenue reductions approaching 75% and all are expected to be loss making‘ the RCA document stated. Maggie Carver, the chairman of the RCA added: ‘The financial effects of Covid-19 have been devastating to racecourses of all sizes with revenues impacted up to 75% in some cases.’

Two of the biggest money-earners for horse-racing are the Cheltenham National Hunt Festival in March, and the Grand National meeting at Aintree in April, and as things stands at present it seems unlikely that anywhere near full capacity crowds will be allowed. If fact it’s hard to see any crowds being permitted at Cheltenham after it was wrongly blamed by certain media motormouths and the anti-racing lobby for being a ‘super-spreader‘ event last year.

© AP Photo / Morry Gash
The Sputnik Intelligent Punter’s Guide to the Christmas Sporting Programme
What makes the future even more worrying for sports aficionados is that Health Secretary Matt Hancock refused this week to give a timetable for when Covid restrictions will be lifted, even with the advent of vaccines- and Chief Medical Officer Chris Whitty aka ‘Professor Gloom’, has said that lockdown may have to be re-imposed next winter (that’s if the current one is ever lifted) .

It is inevitable that unless spectators are allowed back into stadia in similarly large numbers to pre-March 2020 by the summer (and that means no ‘social distancing’ measures), then sport will take a terrible hit. Many lower division football clubs are likely to go out of business. Racetracks too will be threatened with closure. And of course we must not forget the knock-on of non-professional sport currently being suspended. ‘Elite sport’ feeds off amateur sport. Point-to-point racing, suspended since 4th January, sustains National Hunt. Likewise lower-league non-league football with the professional game. Without a thriving ‘grass-roots’ sport is doomed. The sporting landscape will look a lot more barren in twelve months time if current Coronavirus restrictions last beyond the spring. Government ministers need to be asked every single minute of every single day ‘what is your plan for returning things to normal’? We really do need to know.

This weekend’s showpiece is the 3m5f Classic Chase at Warwick, due off at 3pm on Saturday. As was the case with the Welsh Grand National, when our 12-1 selection The Two Amigos ran a blinder to finish a gallant second, and the previous year’s 3rd (Yala Enki) and 4th (Prime Venture) repaid each-way support  again, last year’s renewal is a good starting point to try and solve the puzzle of this year’s race. Dan Skelton’s Captain Chaos was a very good second in what looked a better quality race twelve months ago, when, running off a mark of 134, he led until headed at the last. He looks sure to go well again off 136 especially as the  blinkers are back on and could prove hard to catch.

Last year’s third, Petite Power, looks overpriced from an each-way perspective at 25s. Fergal O‘Brien‘s charge was in better form twelve months ago, but it could just be that the veteran takes longer to come to the boil nowadays and he is able to race from a 9lbs lower mark than in 2020. Another for the shortlist is Le Breuil, who was fifth last year. He’s 8lbs lower this time and wind surgery since his third at Aintree in the Becher last month should make him very competitive.

In the Pertemps Network Hurdle (3.00) the gallant Tobefair can make the frame at odds of 10-1. Debra Hamer’s stable star has won and finished third in the race in the past and although he carries top weight he did win off his current mark (149) on heavy ground in October 2019.

The match of the weekend in the Premiership is undoubtedly the top-of-the-table clash between the current champions Liverpool and the new league leaders Man Utd at Anfield on Sunday. United did lose at home to Man City in the League Cup semi-final but their form on the road has been superb, taking 22 points from a possible 24. With Liverpool unbeaten at home in the league since April 2017, a draw is probably the percentage call.  Elsewhere  4th placed Leicester entertain 7th placed Southampton and Sheffield United, who got their first League win of the season in the week, are at home to Spurs, who dropped points at home to Fulham. Over the Christmas period we were hitting an excellent 20% strike rate with our scoreline predictions, let’s hope it can continue this weekend!