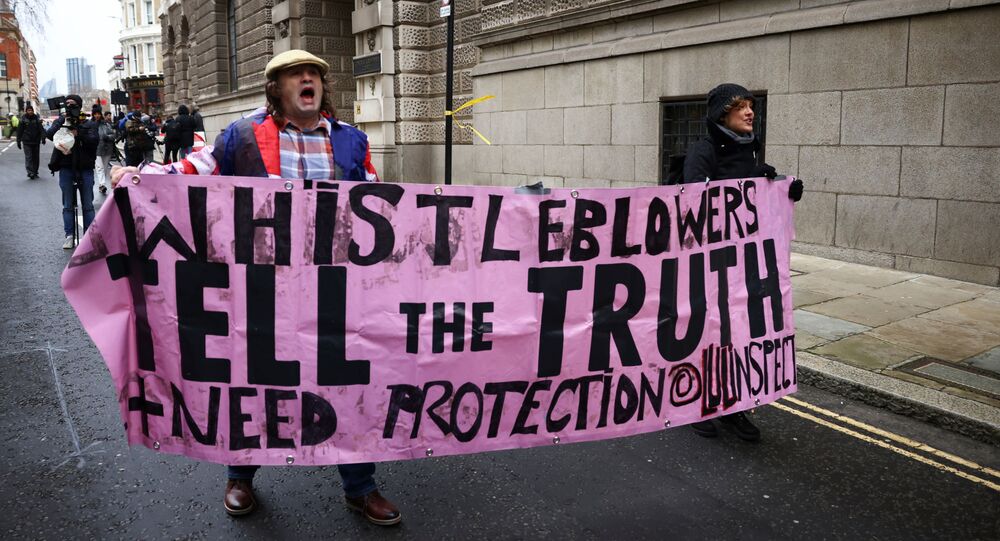 The US government attempt to have Julian Assange extradited to America to face 18 counts of criminality under the 1917 Espionage Act has been rejected in a ruling running to one hundred and thirty-one pages and four hundred and ten paragraphs.

I am glad but not happy. Pleased but not content.

It is the right decision but for the wrong reasons. In essence it is a cop out which rejects six of the seven grounds presented by Assange’s defence team.

Mohamed Elmaazi
Judge Rules Against Extraditing Julian Assange to the US, Purely Based On His Risk of Suicide

Judge Baraitser exposed the biased ‘Establishment first and always’ nature of British justice by rejecting the truths which only the wilfully blind refuse to acknowledge.

The District Court judge refused to accept the case was politically motivated, that it constituted an abuse of legal process, and the most fundamental truth of all, that Assange is sought by the US to silence him, imprison him, and kill him not for exposing US secrets but for exposing multiple US war crimes, human rights abuses, and torture of innocent human beings.

Julian Assange has been publicly lied about and vilified, forced to submit to seven years of voluntary imprisonment within the Ecuadorian embassy and subjected to a US led and UK encouraged political persecution. It is an assault on the freedom to publish the truth about the most powerful in society because he dared to expose the dark and criminal imperialist heart of the US as it trampled on human rights and committed countless war crimes in Afghanistan, Iraq and throughout the world while deceitfully carrying a flag emblazoned with the false ‘rule of law’ justification.

Assange Exposed Lies from the Powerful

Assange facilitated the publishing of the whistle-blower Chelsea Manning’s leaks which definitively established in incontrovertible terms what other investigative journalists have sought to expose for decades. The US is not the world’s upholder of law and order but the world’s principal abuser of international law and violator of human rights in pursuit of power, influence and/or control. The economic interests of US arms manufacturers, oil companies and other giant corporations matter more to the US than international laws, national sovereignty or universally accepted human rights.

Examination of the Iraq and Afghanistan war logs and the thousands of diplomatic cables published by Wikileaks reveals the tangled web of lies, deceit, and wanton criminality of the US and its powerful Western allies like the UK and France alongside its duplicitous relationships with undemocratic regimes in the Middle-East. Wikileaks and Assange had to be silenced, discredited, and punished. That is what this extradition case was all about and the judge’s failure to accept that fact reflects the craven nature of the legal establishment within the UK.

Judge Ruling is Weak and Cowardly in Essence

Judge Baraitser rejected the US extradition request on one single ground which she summarised in paragraphs 362 and 363:

362. ...in these harsh conditions, Mr. Assange’s mental health would deteriorate causing him to commit suicide with the “single minded determination” of his autism spectrum disorder.

363. I find that the mental condition of Mr. Assange is such that it would be oppressive to extradite him to the United States of America.

The US lawyers have already indicated they intend to appeal this ruling and I worry the single basis of the judgement leaves it susceptible to such an appeal. The US could introduce guarantees about the nature of the establishment a convicted Assange would be detained in and that could assuage much of the judge’s concerns. It is a weak and worrying judgement because it has effectively rejected the massive human rights fears, freedom of speech fears, freedom of expression fears and freedom to conduct proper investigative journalism fears which the Assange defence team and witnesses presented during the case.

Julian Assange’s partner and mother to his two young boys made an impassioned speech outside the court in London today pleading with the US to back down and release Assange form the persecution he has endured over the last decade. While appreciating her emotional pain and sincere intent the one thing I cannot fathom or accept is her appeal to Donald Trump to intervene on Julian’s behalf.

It would be perversity personified if a man of such serial dishonesty were to intervene on behalf of a man persecuted for exposing the truth. How hypocritical the whole situation is can be summed up by reading the Washington Post released script of President Trump’s one hour long phone conversation with Georgia’s secretary of state Brad Raffensperger on Saturday during which he undoubtedly broke several electoral laws and opened himself up to an almost certain second impeachment process.

Just when you thought it was impossible for Trump to lower the office of US President in the eyes of the world any further, he is caught asking for and pressurising an elected State politician from his own Republican party to cheat, to steal votes to subvert the electoral process. The rottenness of Trump reflects acutely the rottenness of the whole political establishment in the US. That any country would agree to extradite someone of Julian Assange’s ilk to a country of this nature is unacceptable. It is laudable that Mr Raffensperger steadfastly refused to concede to Trump’s request and ridiculed the premise of that request but the fact that such a brazen request is recorded from a President of America, the most powerful position in the world, reflects how corrupt that powerful nation is at core.

Voices in Support of Assange Must Become Louder Than Ever Now

Surely every citizen of the planet must consider now and forever that US criticisms and attempts to undermine elections in other countries, like they did recently in Bolivia and Venezuela, must be seen in the context of a country where an elected President refuses to concede an election and is then recorded attempting to persuade a political ally to steal votes for him.

The US is simply not fit to comment on the electoral processes of other nations and past and future attempts to undermine elections of politicians not favourable to US imperialist domination and theft should be accorded the credibility of a fifty-bob note. Bodies like the EU should now publicly apologise for giving credence to US criticisms of election outcomes in Venezuela and Bolivia.

I am incredibly pleased for Julian Assange today. I sincerely hope he is released from Belmarsh prison after the scheduled bail hearing on Wednesday and reunited with his partner and children. But the right decision today is weak and fails to uphold the hard-won rights of freedom of speech and freedom to pursue and print the truth by investigative journalists. I hope the US decline to appeal but their disregard for integrity and honesty in the conduct of their affairs fills me with dread that not only will they pursue an appeal, but they might win it.

The voices calling for Julian Assange to be released and applauded for his work, not persecuted and hunted must become louder and more numerous today. An important battle has been won but his war is far from over. The US and UK hate that their dishonesty, their multiple war crimes, and their consistent violation of human rights has been exposed by Julian Assange and Wikileaks. Their vindicative characters and lust for revenge will compel them to continue their politically biased pursuit and persecution of a man whose only crime was exposing the truth.

Read paragraphs 79 and 80 of the judgement today and hopefully you will vote for the Assange side, the ‘right to truth’ side:

79. ...the defence submits that there is an extensive body of international materials concerning the “right to the truth”, the public’s right to know about the existence of the violations of human rights disclosed in these materials and the State’s duty not to conceal them... The defence called evidence to demonstrate the significance of the WikiLeaks revelations and the US government’s involvement in serious criminal activity revealed by the publications.

80. ... Article 10 of the ECHR would sanction these disclosures, as the risk of harm to a small number of sources, described by the defence as “unintentional, small and unsubstantiated”, would be weighted against the risk of harm to “millions”, whom the defence describe as “potentially subject to global-scale ongoing war crimes and torture” .

The Assange case is really about the ‘right to truth’ versus the ‘freedom to lie’ and every citizen should decide which side they are on.