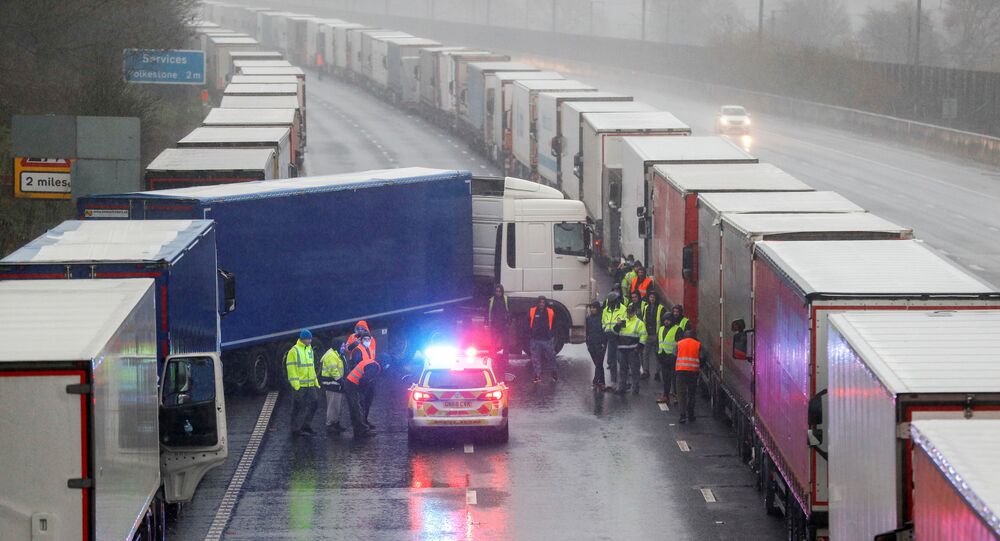 How wonderful to see the Sikh community display the true spirit of Christmas and organise themselves so quickly to cook meals and distribute them to the lorry drivers being held hostage by Macron.

Compare and contrast their generosity and direct action with that of Macron who is clearly using this new variant of Covid to heap more pressure on Boris.

I accept he might be concerned about the safety of his citizens but if he really believes that this variant isn’t already in France he’s daft as well as duplicitous.

The Dover debacle is further clear proof that the EU is about as much use as a chocolate fireguard.

Despite their demands to get the trucks moving, Macron is dragging his feet and now truckers of all nationalities are getting angry, very angry.

There have been physical confrontations between drivers and the Police. Many of the Truckers were NOT wearing masks and were clearly breaking social distancing rules.

This event will turn into a super spreader scenario and this will escalate if the politicians don’t take the lead of the Sikhs and get their finger out and sort the problem fast.

Boris should take succour from Macron’s actions to stiffen his spine and walk away from these never-ending discussions on a trade deal.

Boris, take direct action like the Sikhs and walk away and concentrate on the Covid crisis.

The example and spirit of the Sikhs has lessons for the rest of us Brits too.

I would have thought at a time of real national emergency we Brits would have displayed the ‘Blitz spirit’ and come together to fight a common enemy.

However, the pandemic has split the nation even more than Brexit.

This started with the devolved nations doing as much as they could to go their own way. Boris should have invited them into the ‘Tent’ right from the beginning as this virus does not respect national boundaries. It’s frankly ridiculous that we have different rules in the different countries that make up the United Kingdom.

The MSM also have a major role to play in calming down the debate and atmosphere too.

The story about Nicola Sturgeon not wearing a mask for a few minutes at the funeral wake is a great scoop but on the scale of things, I’m not sure it’s a front-page story.

This is not anywhere near the same scale as the deliberate rule and law-breaking of Kay Burley, Dominic Cummings and the SNP’s Margaret Ferrier.

I also admire the fact that Nicola Sturgeon has come straight out, fessed up and apologised. She has taken ownership of her mistake and taken real direct action by apologising.

We as individuals and the public can also do something to make the situation and atmosphere easier too.

Our first direct action should be to stop pretending we are all expert virologists and professors of epidemiology. Most of us couldn’t even spell the words a few months ago, let alone understand what they do.

Could we also all drop the hyperbole and aggression on social media, whichever side of the debate we’re on?

I include myself in this criticism.

We all seem to be keen to lose the head and start being aggressive to one another rather than debating the issues. Are we all in a panic?

© REUTERS / HENRY NICHOLLS
'The Virus Has Adapted to Our Cells': 'Mutant' COVID Strain Detected in UK Stoking Fears in Europe

Look, I believe that the virus is real and it is spreading. I have made no secret of agreeing with the first lockdown although it was too late and too soft. I believe it did work in suppressing the virus and that is an indisputable fact. It was never intended as a cure.

It was an act of direct action that all of us got behind.

However, since then most of Boris’ decisions have been too late and have been like applying a sticking plaster to a severed jugular.

There have been massive mistakes made by Boris, and the communication has been shocking.

The ‘Eat out to help and spread Covid all about’ was clearly a major blunder.

However, the furlough scheme has been the right approach but there is still a real necessity for major help for the ‘Excluded’, all 3 million of them.

Boris also needs to give certainty to the hospitality industry and some more real support and some ideas of realistic timetables. The industry needs direct action NOW!

It is also vital to remember that we do have a vaccine on the way and the rollout has started but with 90 percent of beds in NHS Hospitals already occupied it is clear that we are in a clear and present danger.

Boris, there isn’t time for dithering and delaying. Just take direct action like the Sikhs have done and impose a national lockdown starting on Boxing Day.

If your scientists are telling you that we have to lockdown to get in front of the virus, just do it.

Act like a Sikh, identify the problem and just take direct action and worry about the critics later, much later.