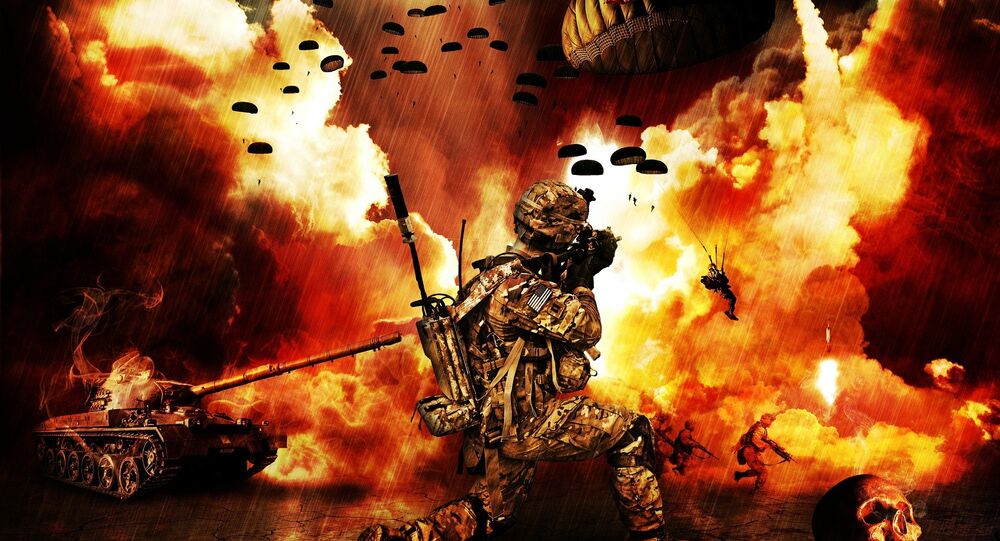 US War Machine Masquerading as Country

The late and not-so-great Republican Senator John McCain once provocatively described Russia as “a giant gas station masquerading as a country”.

Mitt Romney, the former presidential candidate and fellow Republican Senator, was quoted in US media over the weekend channeling McCain’s contemptuous description of Russia.

Russophobia among the American political class has become hysterical over the past week since prominent media outlets reported on an alleged massive cyber-attack attributed to Russian agents.

For any objective reader, such “reports” (more accurately “propaganda”) are ludicrous. There is no evidence to support the lurid claims of Russian hacking. The “story” – as in countless other “stories” in the past about alleged Russian malfeasance, from election interference to bounty-hunters killing US troops in Afghanistan – relies on anonymous sources, innuendo and gullible journalists.

It’s so obviously a psychological operation orchestrated by the US military-intelligence nexus which is facilitated by hacks at the New York Times and other major outlets who are in the pocket of the CIA.

The Pavlovian response among the American politicians is a classic demonstration of ideological conditioning. Republicans and Democrats are accusing Russia of committing an act of war from the alleged cyber-assault. They are hence braying for a “cyber-retaliation” against Russia.

Recall from whistleblower Edward Snowden’s revelations about Vault 7 that the CIA and the National Security Agency have digital weaponry to carry out cyber warfare which can be then falsely attributed to others.

It is entirely plausible that the latest purported Russian hack-attack is in actuality a digital false flag perpetrated by US intel agencies and amplified by the servile media.

The timing of all this is highly significant. Just as Joe Biden is formally confirmed as the president-elect last week there is the massive media furore over a supposed Russian “act of war”.

Biden has dutifully indicated that he will take appropriate counter measures against Russia. As if girding for confrontation, Biden said:

“We need to disrupt and deter our adversaries from undertaking significant cyber-attacks in the first place… We will do that by, among other things, imposing substantial costs on those responsible for such malicious attacks, including in coordination with our allies and partners. Our adversaries should know that, as president, I will not stand idly by in the face of cyber-assaults on our nation.”

The manipulation going on here is as transparent as it is brazen. The American Deep State of military-industrial complex and its intelligence agencies are itching for a more aggressive policy towards Russia and China. US hegemony and corporate profits depend on it. It looks like Russia is being prioritized as the main enemy. And it looks like Biden, predictable as ever, is lapping up the script for renewed aggression.

Which brings us back to the late McCain and Romney’s depiction of Russia as “a gas station masquerading as a country”. They are of course referring to Russia’s prodigious oil and gas natural wealth.
Something no doubt America’s imperial planners would love to get their lusting hands on.

But it is pathetically ignorant of such American politicians to denigrate Russia as being all about hydrocarbons. This vast country with millennia of history has provided some of the world’s greatest cultural talents, from Tolstoy to Tchaikovsky, Dostoevsky to Mendeleev, and many more luminaries in the realms of science and technology, art and philosophy. It also liberated Europe from the tyranny of Nazi Germany, which American and other Western capitalists had stealthily financed the rise of during the 1930s.

By contrast, in its couple of centuries of existence, the United States has provided modest cultural contributions. What’s more, it has been a much bigger destroyer of culture than it has been a creator.
From genocidal wars against its own native people, the US became an implacable imperial power waging near-continuous wars in every corner of the world, the death toll from which is in the tens of millions.

The US spends $740 billion on war machines every year – more than 11 times Russia’s defense budget. The US has 800 military bases around the world in over 70 countries. It is illegally occupying countries, bombing and killing civilians.

The United States is a war machine masquerading as a country whose political class and mass media are so throughly brainwashed as to be beyond redemption.