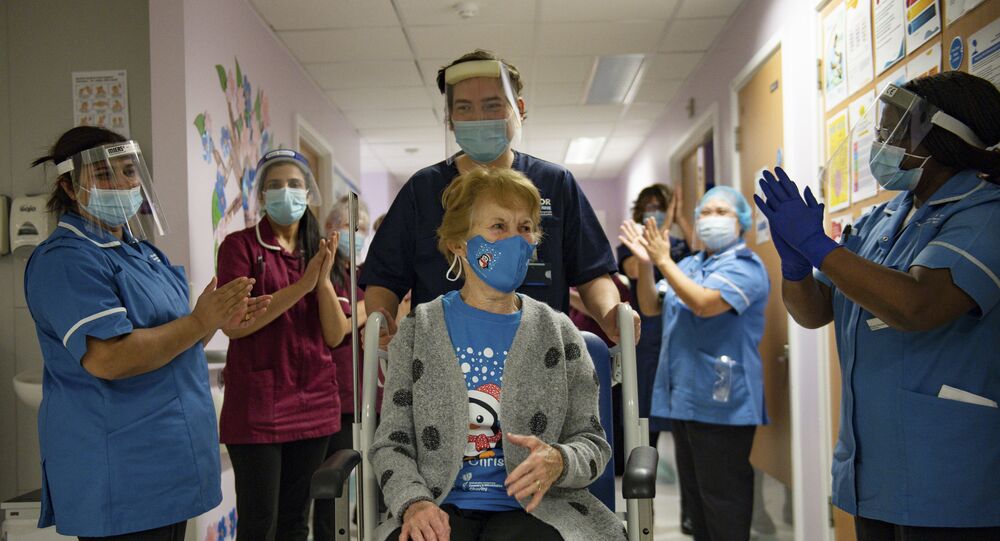 Margaret is a Hero, Burley is a Zero!

Great to see my hometown of Coventry leading the news on V Day as Margaret Keenan got the first vaccine jab in the UK. Today in the words of Maggie Thatcher is a day to stop sniping and rejoice, rejoice, rejoice.

Anti-vaxxers are free not to take the jab if they wish but I am fed up of their negative attitude to people who do want it and, make no mistake, every poll says the majority will have the jab.

Yes, the vaccine has been fast-tracked, but that does not mean it is dangerous, and what else do the anti-vaxxers want: shall we wait ten years and be locked in our homes and wreck our economy forever?

The ‘let it rip brigade’ are being left behind by events as proved by the new death and case rates in Sweden.

The vaccine is a way out of this mess, if we all now pull together and enough of us have it.

I agree with Matt Hancock (there’s a sentence I never thought I would write!) - we all still need to social distance, wash our hands and follow the rules even if they are confused, a bit stupid and contradictory.

That is why I am so disappointed to hear about the stupidity and sheer arrogance of Sky New’ presenter, Kay Burley and ten of her colleagues who flouted and broke the rules when they celebrated her birthday.

Credit to the Guido Fawkes website as it was a cracking exclusive and they are right to put her stunning hypocrisy into the public arena.

For months she has been lambasting the likes of Dominic Cummings and Prof Neil Ferguson for ignoring their own guidelines, and rightly so.

However, then to ignore them herself is an act of gross stupidity and downright dangerous at this critical time in our fight against the pandemic.

Sky News have suspended her pending an inquiry.

However, I can’t see anyway back for her as she will have no authority when giving Ministers a hard time on policy and mistakes in the coming months, and let’s be straight: there will be mistakes as Hancock is still in charge!

Journalists Must Socially Distance From Politicians

Likewise, Beth Rigby, Sky’s Political Editor, is in a tricky position as she is remembered for berating Cummings after the ‘Mr Magoo episode’ asking if there is one rule for him and another for the rest of us.

Last night Kay made a weak excuse on Twitter that she was desperate for a pee, so she popped into another restaurant looking for a toilet - it nearly made me wet myself!

Has Dominic Cummings got a new job as her PR adviser?

What is the excuse for carrying on the party back at your house then with four of your colleagues, Kay?

Tier 2 clearly states no mixing of households. Or is Sky News such a jolly club you all share a house?!

As far as I can see, she broke at least three rules/laws.

I wonder if Sky News sent the TV crew round to Burleys pad to ‘doorstep’ her this morning?

Of course, they didn’t and indeed the whole MSM broadcaster world have tried to ignore the story.

Kay wasn’t in Coventry presenting today and it looked to me as if the Kay Burley show livery had been removed from the screen.

The newspapers have covered the story but with no real comment. However, the fact that the BBC, Sky News, GMB and Piers Morgan, in particular, seem to have taken a vow of silence on the subject is shocking but not surprising.

It is just another example of how the Westminster bubble, the elite, both those in politics and those who report on it, are in bed with each other metaphorically speaking, and often literally!

UK politics would be in a much better position and indeed more trusted if there was real social distancing between politicians and certain favoured “journos”.

I am fed up of spin on Covid and this week on Brexit from the government to favoured journalists. Is this a form of political pillow talk?

And don’t give me any guff about Burley being different to the ‘bonking professor’ Ferguson or Cummings as she doesn’t make the rules.

Well, neither does Rita Ora but that hasn’t stopped her being scolded and vilified by the MSM broadcasters led by Ms Burley and Piers Morgan.