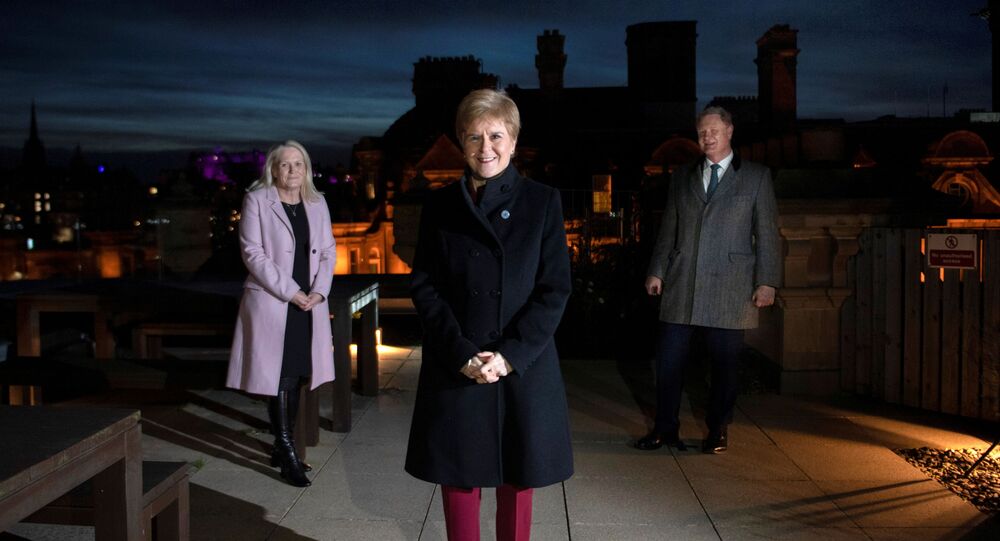 Nicola Sturgeon’s speech to her virtual party conference today was brimming with confidence and a progressive policy agenda which very much sounded like the starting pistol for the May Scottish elections next year and the challenge of IndyRef2. Why shouldn’t she be confident?

She is speaking against a backdrop of fourteen successive opinion polls indicating not just majority support for an independent Scotland but overwhelming support for her party the SNP in relation to next May’s Holyrood election. Several polls have her party support in excess of 50% while support for independence in some polls is as high as 59%. She has every reason to be confident.

There were some very specific and progressive policy commitments within the speech alongside and ideological message that was very much left of centre. Talk of the need for a new Scotland to be kind, compassionate, fairer and more equal stands in contrast to the brutal, cold and callous bedroom tax, benefit sanctions, two child benefit cap and outrageous freeze on public sector pay emanating from Boris Johnson and his Brexit Bully Boys.

The Future of the NHS Will be Determined by IndyRef2

In a clear indication of a major flagship issue in the IndyRef2 vote to come Nicola Sturgeon placed the NHS and it’s future as a publicly owned service able to care universally for everyone regardless of wealth at the top of the agenda. With Brexit one month away despite Scotland voting overwhelmingly against it the NHS will feature in future trading deals brokered by Tories who don’t give a damn about it and will be prepared to sell it off to advance private profits for their chums in businesses desperate to get their clutches into public money currently dedicated to public health. Think only of the Covid19 Track and Trace system the Tories foisted upon us to identify the lie of the land. Twelve billion pounds of public money was handed out to private companies with links to leading Tories and a history of Tory Party donations. NHS Track and Trace is a myth. It is Serco & co who run it for juicy fat profits at the expense of public investment.

Nicola Sturgeon has identified the NHS as a massive and perhaps decisive issue ahead of IndyRef2. When independence campaigners suggested in 2014 that only a YES vote would keep the NHS public many doubted that assertion. Now it is a matter of fact. If Scotland does not vote to separate and become a normal independent country, then the NHS as we know it will be butchered beyond recognition and fail to survive as the valued lifeline service it currently is.

Specific commitments on welfare further drew a clear red line between the cold blue Tories and the more compassionate SNP government. A new Scottish child payment of £10 per week paid to all families in receipt of free school meals for children up to the age of six will directly help the poorest families when it comes into force in February next year. But immediately there will be a £100 million package to issue a £100 grant to the poorest families in Scotland to spend in any way they see fit to best assist their families made available before Christmas. As long as that grant is not difficult to access it will be a massive boost to poverty-stricken families whose problems have been deepened and accentuated during the Covid19 pandemic.

Establishment of a young person guarantee to ensure all young Scots between the ages of 16-24 are able to access work, further education or training is also welcome and necessary as young people have had their lives and opportunities particularly disrupted and ravaged by the Covid19 pandemic. Employers who take on young apprentices will receive weekly allowances and grants to encourage them to produce the skilled workforce of the future. A new independent Scotland will need the engineers, electricians, joiners, plumbers and builders to establish the better, fairer and more equal Scotland Nicola Sturgeon referred to several times.

The First Minister’s contrast between these compassionate and sensible policies and the benefit cuts of the Tories was stark but her specific commitment to NHS and care workers put Johnson and his Tory gang in a bind. She promised there would be no pay freeze for health workers and other public service employees but then committed the Scottish government to a one-off £500 grant to all health and care workers as a token of appreciation for the dedicated service they have given during the pandemic. She promised it would not be part of any future pay deals but highlighted that with their limited fiscal powers they could not make that £500 tax free but called on Boris Johnson to do so. If he and his government don’t make these payments tax free, they will fall deeper into the hole they already occupy and become even more unelectable in Scotland than they already are. This token of appreciation payment is not just right - it is also clever, and it is a move which deserves universal acclaim.

All of the progressive policy announcements contained within Nicola Sturgeon’s speech must be subjected to detailed analysis to ensure they do achieve the laudable aims she outlined but one of those policies was described as “landmark” by her and I agree. If elected next May she has promised the SNP will introduce universal free school meals and breakfasts for all primary school children all year round.

That is a radical and long overdue anti-poverty and pro-health policy that should be welcomed by anyone with a heart. I introduced the Free Meals (Scotland) Bill in late 2001 to guarantee both primary and secondary school pupils free and healthy meals but it was voted down by an alliance of new Labour Tories, yellow Liberal Tories and deep blue Tories. Read the debate and see for yourself just how short-sighted and narrow-minded these comfortable politicians were in the 2002 debate in Parliament that torpedoed my Private Members’ Bill.

I applaud this commitment now to ensure all children are fed and no child is stigmatised by claiming a free school meal.

The commitment to hold IndyRef2 was not strong enough for me and didn’t match the commitment given by the SNP Westminster leader Ian Blackford two weeks ago:

"Once we come out of the pandemic crisis and secure a victory at Holyrood, we would have the platform for a referendum and to have it quickly.

Blackford used the word “must” in relation to IndyRef2 next year and although that was not repeated by Nicola Sturgeon any backsliding on that commitment would not be forgiven by SNP voters and the wider independence movement. On this St Andrews Day 2020 we can say with confidence that 2021 is the year we will become an independent nation once again and Britain as an entity will cease to exist. It is already on a life-support machine. It’s funeral should be arranged within the next twelve months.

Scotland is a proud nation and is more prepared to stand on her own two feet again than ever. We shall be free in 2021.

SNP MP Margaret Ferrier Refuses to Resign, Claims COVID-19 Caused Her to Act 'Out of Character'