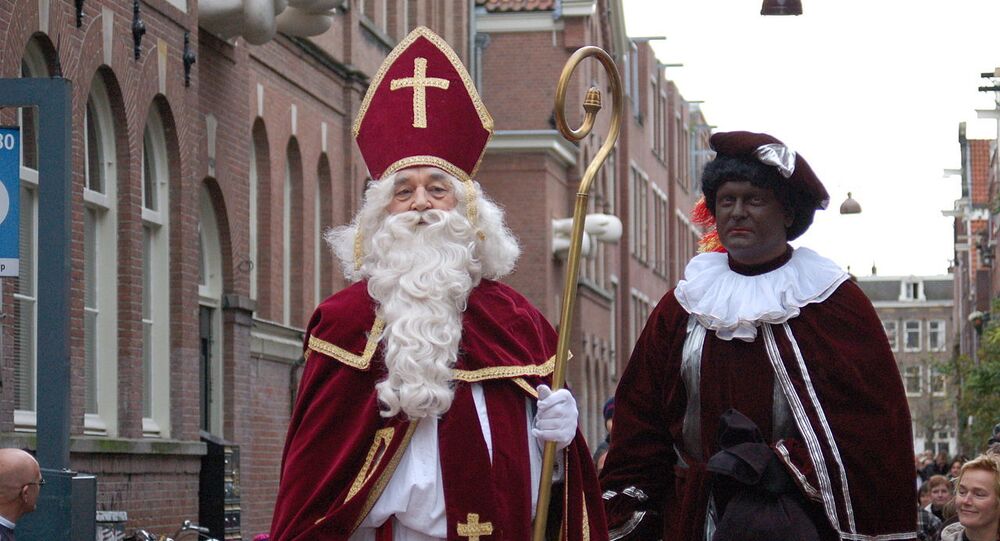 We all know Father Christmas and his American colleague Santa Claus. Less well-known are the Slavic character Ded Moroz and the catholic Saint Nicholas who do as their Anglo-Saxon companions do: bring presents to children around Christmas time. Even lesser-known are Santa's pagan companions.

In The Netherlands, the black face character Black Pete has come under attack.

December 5 and 6 are St. Nicholas' Eve and Day in The Netherlands and Belgium, when Saint Nicholas, also known as Sinterklaas, visits children and brings them presents. In The Netherlands, the main celebrations take place on December 5, rather than December 6. Children are told he lives in Spain and uses a steamboat to transport his presents. Sinterklaas carries a big red book which records whether children have been good or naughty in the past year. His annual arrival in the third week of November is broadcasted live on Dutch national TV. After having arrived in the harbour he mounts his white horse and rides into the town-hall, where he is welcomed by the mayor of the city. All over The Netherlands and Belgium St. Nicholas makes public appearances. Children are visited in schools, hospitals, and shopping centres. Many shops are filled with Sinterklaas decorations, gifts, and toys. Special songs are sung to honour St. Nicholas. The figure of St. Nicholas is derived from Nicholas of Myra who officiated as a bishop in 4th century Greece. The Dutch Sinterklaas is said to be one of the sources of the American Santa Claus.

Sinterklaas is assisted by black-faced helpers who are dressed up in Moorish attire, so-called 'Zwarte Pieten', in English: Black Petes. They carry bags with candy for the children but also brooms made of willow branches to spank children who have been naughty. Some of the older Sinterklaas songs make mention of naughty children being put in Pete's bag and being taken back to Spain. In the old days, when each home was equipped with a chimney, children were told Pete delivered presents through the chimney, and therefore his face had become black.

In recent years Black Pete has become subject of controversy. Some black people in The Netherlands think it's a racist character, a remnant of the times before the Dutch abolition of slavery in 1863. There have been protests of black people against Pete. Some even went as far as to threaten to attack people dressed up as Petes. Many shop owners have removed decorations containing Santa's helpers. There have been violent clashes between pro and anti-Pete protesters. Some cities and television channels now only display Pete characters with some soot smudges on the face rather than full blackface, so-called "soot-smudge Petes" or "chimney Petes".

© REUTERS / PIROSCHKA VAN DE WOUW
A man holds a sign as he protests against the arrival of Saint Nicholas and his assistants called "Zwarte Piet" (Black Pete) in The Hague, Netherlands, November 16, 2019. The sign reads "Blackface is racism".

Black Pete first appeared in print as the nameless servant of Saint Nicholas in a book titled "St. Nicholas and His Servant", published in 1850 by Amsterdam schoolteacher Jan Schenkman. However, the tradition of white people blackening their faces appears to date back as far as Pre-Colonial and even Pre-Christian Times, when there were no black people living in Europe and the vast majority of Europeans didn't even know black people existed. There seem to be parallels between Sinterklaas and his helpers and the Wild Hunt of the Germanic god Wodan or Odin, who was worshipped in Northern and Western Europe prior to Christianization. Riding a white horse he flew through the air as the leader of the Wild Hunt, always accompanied by two black ravens. Those helpers would listen, just like the Black Petes, at the chimney –a hole in the roof at that time – to tell Wodan about the good and bad behaviour of the mortals. Dutch filmmaker Arnold Jan Scheer made a fascinating documentary about blackface traditions all over Europe, among which in France, Spain, Germany, Italy, Greece, Bulgaria, Austria, Czechia, Macedonia, Ukraine and Russia. According to Scheer most if not all of these traditions are connected to pagan Midwinter fests. After the introduction of Christianity, some of them were incorporated into the new religion. Scheer's documentary was boycotted by the political-correct Dutch broadcast community. He, therefore, put his film, entitled Pagan Europe, for sale on DVD.

People that protest against Black Pete are confusing this character with the Minstrel shows in the US, anthropologist prof. Roslyn Frank says. In the Minstrel shows, white people lampooned black people. That's not what Black Pete and other black face traditions in Europe are about. "Alleging that Black Pete is racist is a criticism that came from the United States," she explains. "They don't understand that he belongs to a Pan-European phenomenon." White people blackening their faces go back to pre-agricultural times when people were hunters and gatherers, Frank believes. According to her, Europe's blackface tradition is connected to a 'bear cult', when people believed they descended from bears. This cult got intertwined with Saint Nicholas, who is sometimes depicted with a bear. "Americans are very unaware of the very rich tradition folklore that the Europeans have kept."