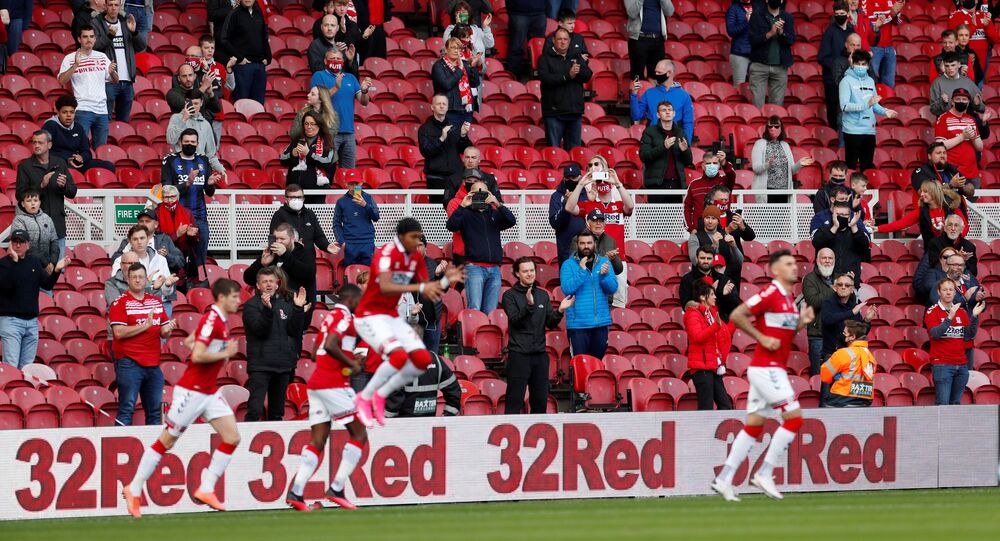 Tiers of Dissatisfaction: Some Spectators Are Coming Back But the Government Moved the Goalposts

There was a pleasant surprise on Monday when we learnt that spectators were to be allowed back into sporting events in England, but the placing of around 98% of the country into the toughest two ’tiers’ has greatly dampened enthusiasm.

After being fed a diet of unremittingly bad news, it was nice to have a ‘Breaking News’ story that was actually quite positive earlier in the week. A shock announcement was made that from next Wednesday, crowds could finally return to sporting events. This was much earlier than many expected. But again, the devil was in the detail. We were told that once the country was out of its latest ‘National Lockdown‘ and reverted to a Tier system, sporting venues could allow up to 4000 spectators in if they were in ’Tier 1’ and up to 2000 if they were in ‘Tier 2’. That was the good news. The bad news came three days later, when Prime Minister Boris Johnson announced that the vast majority of the country would be in the toughest two tiers.

Before November, 29m people were in Tier 1. But from next week the only places in England in the lowest tier will be Cornwall, the Scilly Isles and the Isle of Wight. None of those places, where just 714,000 people live, has any racetracks or league football teams. Most of the areas with the highest concentration of professional football teams, such as Lancashire, the East and West Midlands and Greater Manchester are in Tier 3, meaning no fans are allowed. A number of National Hunt racetracks are in Tier 3 areas too, including Doncaster, Newcastle, Sedgefield, Uttoxeter and Stratford-upon-Avon. And all the rest are in Tier 2, meaning at the most only 2000 spectators will be allowed back. There’s also the conditions for readmitting spectators to consider. While football fans won’t have to wear a mask once inside the stadium, racegoers are expected to wear one, except when they are eating or drinking. That’s hardly an attractive proposition for paying punters considering race meetings last for around four hours. Why, when masks outdoors are not mandatory in England should a racecourse be the only place outdoors you are obliged to wear one? Hopefully, the racing authorities will have a quick rethink.

There’s also, when it comes to football, the advantage that the clubs who are allowed to admit supporters will have over others. This is a point that has been flagged up by Leeds Utd manager Bielsa. Ten Premiership teams, the London quintet Arsenal, West Ham, Spurs, Crystal Palace and Fulham, plus the Merseyside duo Liverpool and Everton and Brighton and Southampton on the South Coast, will be able to play in front of 2000 spectators. But the other ten teams will have to continue playing ‘behind closed doors’. We’ve seen how the absence of supporters has greatly reduced ‘home advantage’ this season. But some teams will now have a crowd to cheer them on while others won’t. How many points will that be worth? It’s good that spectators are finally coming back, but it would have been much fairer simply to end the unnecessary restrictions altogether and return to the normal we enjoyed before the March lockdown.

The Sputnik Intelligent Punter’s Guide to the Ladbroke

This weekend’s big horse-race is the Grade 3  Ladbroke’s Trophy Chase aka ‘The Hennessy’, due off at Newbury on Saturday at 3pm

It’s a very competitive 18-runner field, but what are the key stats which will help us pinpoint the winner?

First, weight. Since 1997 only two horses (the mighty Denman in 2007 and 2009), and Trabolgan in 2005, have carried more than 11st 6lbs to victory. For the last eight years the race has been won by a horse carrying within 6lbs of the 11st mark (either way). There have been five winners carrying between 11st 4lbs and 11st 6lbs since 2005, and eight carrying between 11st 1lbs and 11st6lbs in the same period. Regarding age, this usually goes to an unexposed up-and-coming chaser who was a novice the previous season. Only one horse older than 9 (Sizing Tennessee), has won since 1981, the most popular ages for the winner are six and seven, an age range which accounts for thirteen of the twenty winners  2000. Regarding trainers, Dorset’s Colin Tizzard has a tremendous recent record. He has won two of the last four renewals, saddled the 1-2 in 2019, had the third last year and the second in 2015. Nicky Henderson has also done well in the race, with three winners since 2004 and a 25-1 fourth last year.

Regarding odds, seven of the last ten winners started 10-1 or shorter, but only three favourites have obliged in that period (as in the period 2000-2009) and we’ve also had winners at 20-1, 12-1 and 12-1. There’s also been a number of bigger-priced runners who have hit the places, so don’t be put off an each-way bet on an outsider.

Let’s take a closer look at the field.

VINNDICTATION is likely to start favourite but while he’s clearly a horse on the up (2nd behind Cyrname at Wetherby last time), and should run well, he does have a lot of weight (11st 11lbs) from a win perspective and all his wins up to now have come on right-handed tracks.

COPPERHEAD at 9-1 isn‘t bombproof as he’s fallen and pulled-up in his last two races but he does tick a number of boxes. He’s trained by Colin Tizzard, is a course and distance winner, is the right age (6), has the right profile (he was a novice over fences last year) and is in the right weight range (11st 2lbs). Tizzard’s other runner MISTER MILARKEY, a 7-year-old carrying 11st and wearing first-time blinkers also shouldn’t be overlooked at odds of 16-1. He was sixth last year and the better ground is likely to suit him more this time.

As a 7-year-old bang on the 11st mark, the Scottish raider AYE RIGHT, third behind Cyrname last-time, is another for consideration, while the drying ground will definitely suit bottom-weight CLOTH CAP, who was an eye-catching staying on third over a slightly shorter trip at Cheltenham on his seasonal reappearance in October. Of the longer-priced runners, LA BAGUE AU ROI, a 22-1 shot, is older than ideal (9) but he has won at this meeting before and is well-weighted so could run into a place.

The big clash of the weekend in the Premiership is third-placed Chelsea taking on top-of-the-table Spurs at Stamford Bridge on Sunday. Both teams are in fine form, with Spurs unbeaten in seven, Chelsea in six, and a score draw could be the likeliest result. Elsewhere Brighton entertain the champions Liverpool, who have won on all four of their visits to the Amex,  while on Sunday high-flying Southampton entertain Man Utd in a repeat of the 1976 FA Cup Final.