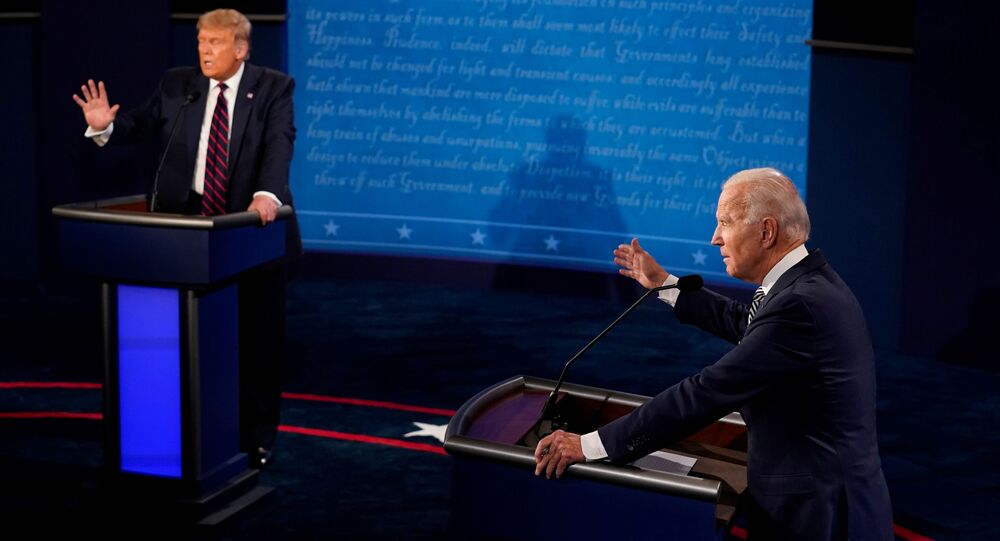 The most remarkable moment in the 90-minute US presidential debate was President Trump’s refusal to outright condemn white supremacist groups.

Indeed, he went further by referring to one such group by name, Proud Boys, and then told them – apparently approvingly – to “stand back and stand by”.

Stand by, for what? It sounds like a license to violence.

Donald Trump has been frequently accused in the past of stoking racial strife with his off-the-cuff remarks and ambiguous asides. He was again accused of insidious incitement by his Democrat rival Joe Biden during their first televised presidential debate this week. Trump has been often rebuked for “dog whistling” to white supremacist groups by seeming to highlight racist themes, such as expressing concern about “invasion” by foreigners.

But what he did during the globally watched TV debate was not dog-whistling, which is a deniable nod-and-wink gesture. Instead, the president gave white supremacist groups an endorsement, an approving pat on the head.

Asked by moderator Chris Wallace: “Are you willing to condemn white supremacists and militia groups and to say they need to stand down?”

Trump ducked a straightforward condemnation. Referring to one white supremacist group, he said: “Proud Boys, stand back and stand by”.

He then went on to quickly add by way of misdirection: “But I’ll tell you what, somebody’s got to do something about antifa [anti-fascists] and the left”.

This is tantamount to Trump giving such rightwing militia a license to hunt down legitimate protesters against police racism who, in this president’s telling, are all conflated with radical, violent antifa “domestic terrorists”. The latter depiction itself being a gross exaggeration by Trump.

Following the TV debate, social media reactions from various white supremacist groups were reportedly ecstatic with Trump’s apparent lionizing of their cause on a globally televised presidential debate. If that wasn’t his intention it certainly had the effect. In any case, is there much of a difference between intent and effect?

His advice to them “to stand by” is darkly threatening of further civil unrest and violence as the US heads towards a bitterly contested election on November 3. Trump’s repeated denigration of the elections as “fraudulent” and “rigged” and the expected high turn-out of mail-in votes delaying a final result announcement perhaps for several weeks after November 3, as well as Trump’s refusal to commit to a peaceful transfer of power if he loses – all that makes for an extremely volatile and dangerously combustible mix. There are credible fears that the US is teetering on civil war.

Trump’s seeming embrace of 'far-right', Neo-Nazi groups is all the more disgraceful and perplexing because several studies by federal law enforcement agencies and other monitors clearly show that white supremacists are by wide margin a much greater threat to US national security than any other form of terrorism, including from Islamist groups.

Trump’s obsession with “radical left” and so-called antifa is completely without foundation. White supremacist networks are responsible for far more killings and violent attacks than any other group in the US. They have been involved in targeting largely peaceful protests which have surged in recent months across the US over police brutality and allegations of unlawful killing of black men and women.

The president of the US is turning reality on its head by blaming violence on leftwing protesters when it is white supremacist militia who are predominantly threatening to turn their guns on citizens, and that’s according to Trump’s own Department of Homeland Security.

© REUTERS / BRIAN SNYDER
Watch: Biden Tells Trump 'Would You Shut Up, Man?' in the Heat of Debate
The TV debate this week – the first in a series over the next few weeks – between Trump and Biden was a shambles. It was an unedifying spectacle of name-calling and personal abuse where policies hardly were presented. Trump certainly demeaned his office with his constant resort to bullying, interruption and talking over his opponent. Biden didn’t acquit himself well either, sneeringly calling the president a “clown” and a “liar” (not inaccurate, but nevertheless a sign of degraded office of presidency and degraded standard of political debate in the US). Biden also didn’t offer viewers a convincing alternative presidential candidate, and in an act of desperation to score points he used the ridiculous non-sequitur slur of labelling Trump “Putin’s puppet”. Hardly a harbinger for improving US foreign relations.

But the gutter-scraping nadir in the proceedings – and a chilling one at that – was when the 45th president of the United States promoted white supremacist groups as some kind of guardian of law and order. If this election gets bogged down in protracted wrangling over vote counts – as it likely will, given that up to 80 million mail-in ballots are expected due to the coronavirus pandemic – then the potential for armed violence is shuddering. A divisive, toxic call to the streets has been made from the current man in the White House. Maybe it’s out of ignorance or incompetence. But it is incendiary all the same and damnable.