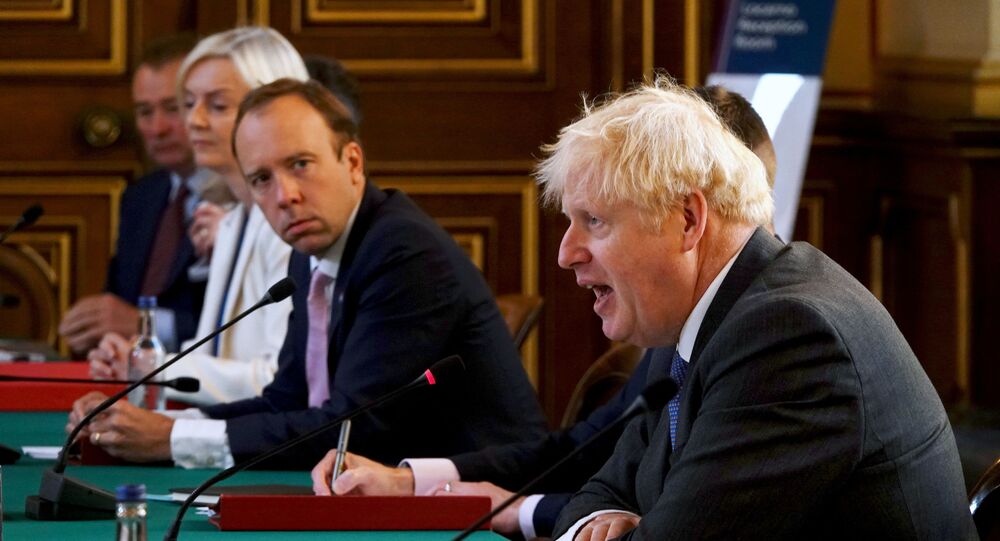 Boris, Give Hancock His P45!

Halloween has been banned but there’s already a nightmare on Britain’s streets. Instead of trying to enforce the unenforceable ‘Rule of six’ to control the Covid spread Boris should meet up with Hancock and boot him up the backside and get this testing fiasco sorted first.

Mass testing has to be the building block to get on top of this virus and should come before Boris’s futile attempt to turn the UK into a ‘Nazi neighbour informing, fascist police state.’

Hancock’s so-called Operation Moon-shot is performing like a damp firework on Bonfire Night, which incidentally has been banned too!

Meanwhile the testing (did Hancock call it world beating?!) is failing miserably with people being unable to get a test. Put simply demand for the test is outstripping supply. The question has to be why?

I will tell you why. It’s because the schools have gone back and everyone knows that when kids return in the first few weeks they pick up all kinds of bugs, coughs and sniffles. Of course, it will get even worse when the students return in the next couple of weeks.

© REUTERS / AAP Image/Dan Himbrechts
What a Present! UK's Coronavirus Vaccine Could be Ready by Christmas, Health Secretary Says
I know of a couple who have two little ones and one woke up with a cough this morning, so they decided to err on the side of caution and get him tested.

Four hours later and many calls they have been unable to get him one so the whole house are now isolating.

Wait though, it gets worse because both the mum and dad are doctors and therefore because of Hancock’s failure to organise a booze up in a brewery two front line GP's are now out of service. This is lunacy.

So, the Government, whose first job is the protection of its citizens, has failed and is failing again to do their basic job.

But Boris and Hancock think they can pass the blame on to Public Health England, Doctors and us the general public.

The allegation that Doctors are being lazy by not seeing patients face to face is laughable and a lie, and a diversion form the government’s own failings.

What did Hancock mean by saying people are asking for spurious tests?

You’re the man with the wide staring eyes and pantomime villain style attempts at menace who has scared the nation to bits.

So, of course when someone develops a sniffle or their child is under the weather they’re going to want to rule out Covid first.

This is the act of a responsible and loving parent because if the child tests positive they will need to isolate too.

So, there is no such thing as a spurious test, Hancock.

Now there are rumours that the Government are considering rationing tests but why is no one asking why we haven’t got enough tests and enough lab space to process them?

For god’s sake we are, or we were, one of the richest countries in the world. Why are we so unprepared again!

Now, Matt Hancock is saying that if people keep asking for a test which they are not ‘eligible’ for he may be forced to come up with a new system.

NO for God’s sake NO!

Are we really going to let this man who appears to have the Midas touch in reverse to come up with a new plan?

The only thing he should be planning is the old Tory cliché of spending more time with his wife and family.

Instead of passing the buck, Boris should be passing Hancock his P45.

Now Priti (Vacant) Patel is saying that even chatting with another family on the street would be breaking the Rule 6 law.

What is this? Pavements have ears! She also states that she would shop her neighbours to the cops if they were “mingling.”

She told the Ministry of Truth (the BBC) that "If people's health would be at risk, it would be right to report that.” “And If I saw inappropriate behaviour which would lead to the spread of the disease I would report it.”

What about the inappropriate behaviour of Boris months ago when he was shaking everyone’s hands and not wearing a mask, how about the behaviour of Hancock thinking he knew more about apps than apple of google?

Or right up to date, what about her own government today you have come up with this nonsensical rule 6 where you can’t talk to your neighbour in the street but in the but you can go Grouse shooting!

Nothing has change since Paul Weller wrote that song in 1979. There are still Eton educated and establishment snobs who think they know better than the people they’re meant to represent.

However, the people are beginning to realise as mass unemployment beckons and the furlough scheme is scrapped that the song remains the SHAME.

© AP Photo / Oxford University Pool
UK Severely Lacks Coronavirus Tests as Labs Prove Unable to Meet Rising Demand, Report Says
Rule 6 will never work because normal people want to be treated as adults not as ‘narks’ and many believe the adage that ‘snitching leads to stitching’ in many communities.

Even the Police are saying they need clarification on these new looney laws and that they have not got the resources or the will to enforce them.

To be frank I would be happier with a return to a full lockdown rather than this halfway, dangerous mad house that they are trying to construct at the moment.

We need mass testing, not mass unemployment. We need the truth, not the spin on testing. We need a Government to serve, protect and govern. But most of all we need a government to be honest about their failures and to get a grip now.