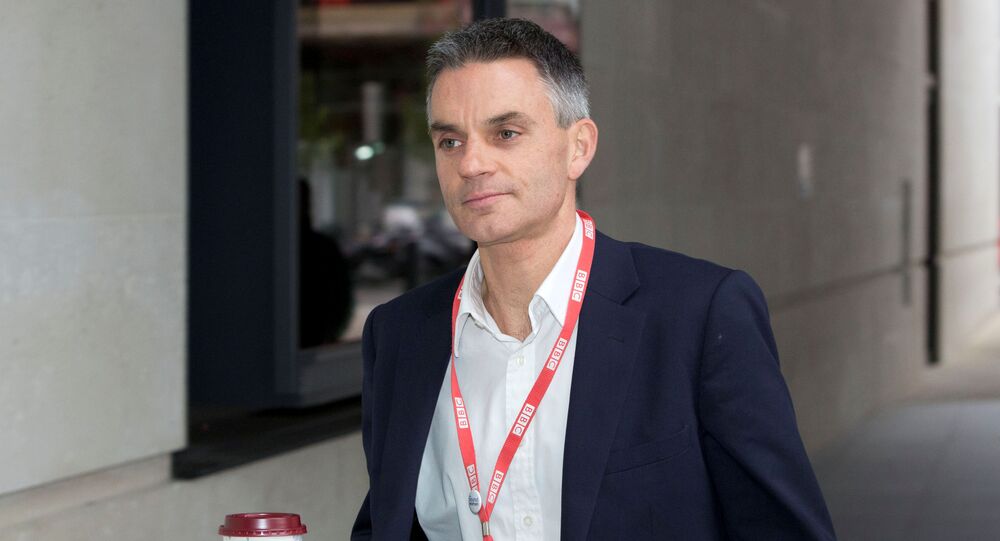 Tim is a man with a plan who has come into the BBC talking tough but more importantly his early actions match his rhetoric. Davie has immediately restored the words to our patriotic songs at the Proms and is now warning that he will sack ‘woke warriors’.

Boris speaks gloriously and often with classical allusions but where’s the action? During COVID it has been U-turn after U-turn, and lie after lie when he and his advisors make mistakes or contradict their own policies.

Tim has a clear direction of travel for his organisation, can the same be said for Boris?

I accept that Boris has had a pandemic to deal with but Tim is facing his own pandemic of ‘wokeness’ and cultural Marxism within the BBC. However, he is talking tough and I actually believe that his actions may match his words.

Tim has obviously also listened to his customers, the licence fee payers, and realised that for the BBC to survive it must truly represent them and their concerns.

I cheered when he added: “If you want to be an opinionated columnist or a partisan campaigner on social media then that is a valid choice, but you should not be working at the BBC.”

It’s good to see that Tim has been reading my columns here on Sputnik!!

I won’t hold my breath on all of this because the lefty woke bias is ingrained in those who work for the BBC but at least he has a clear objective.

However, I’m really looking forward to Gary Lineker, Emily Maitlis and Nick Robinson shutting their gobs and their twitter accounts or handing in their notices asap!

A real concrete plan. Not just a plan to concrete over the countryside with Hs2 that no one wants.

Today he is pushing on with ‘spades in the ground’ on HS2 which COVID has proved, without a doubt, is not needed.

COVID has convinced both employers and employees that work can be done at home and that the life-work balance can be improved.

Boris needs to have the balls to drop this white elephant of Hs2 now and invest instead in high-speed broadband all over the UK.

Despite his threats and desperate pleas, people do not want to go back to the office. He needs to get Pret to deliver him a coffee and smell it, not drink it.

People have spoken with their backsides. The High street was dead even before the pandemic and now rigour mortis has well and truly set in. There will be no miraculous resurrection of the High Street and working back in the office.

Boris made some promising sounds a few weeks ago about reinventing our dead city centres by relaxing planning laws and allowing shops and offices to be converted into flats and housing.

The only future for the High Street is to focus on housing, the night-time economy and leisure with a mix of specialist shops. The 21st century version of the butchers, bakers and candlestick makers. This was and is a great idea so let’s have action NOW Boris.

Meanwhile, Tim over at the Beeb is promising a night of the long knives for the woke comedy merchants and their boring left-wing repetitive jokes. I can’t wait to see that smug lefty Nish Kumar selling the Big Issue, can you?

Davie has also stated that the days of expansion for the BBC are over and that the BBC has spread itself too thinly and been “too slow” at ending projects that did not work. Are you listening, Boris?!

After Boris’s near-death experience with COVID, he promised us a plan. Many people say when they have been close to death they see bright lights but with Boris, all I see is gloom and all-enveloping darkness.

He has allowed wee ‘Jimmy Krankie’ Sturgeon to take centre stage and perform party political broadcasts every day, no wonder the support for independence is growing.

How can we talk about the United Kingdom when she and that dullard in Wales contradict every policy he makes? It is not only the airline industry that is in a kamikaze dive to death, it is the whole concept of the Union.

Right from the beginning of the pandemic, we the people should have been hearing a united voice on the direction of travel but instead, we have utter confusion and contradictions and not only about air corridors and quarantine.

In fact, how sickening is it that it appears easier to enter the UK in an overcrowded dingy than a plane? Not only that but if you come as an illegal you get to ‘quarantine’ for years in a four-star hotel with three square meals a day at our expense!

This nonsense is leading to the customers (us the voters) losing all confidence in our politicians, just as we did with the BBC when their bias was so transparent over Brexit, Trump and Immigration.

Boris was much too slow in imposing the lockdown and allowing mass events to continue. He was an absolute clown to still allow flights in to the UK from coronavirus hot spots like China, Italy and New York for months whilst he shook every one’s hands and said masks were not needed.

Now I can’t help but think he is covering his, still ample, ar*e and worrying about the inevitable public inquiry which will condemn his early inaction and the associated death toll.

However, Boris needs to push his own selfish concerns aside and put his country first, all of his country.

It's pretty simple Boris, over thirty other countries are now testing at airports, why aren’t we?

Hancock, your useless Health Secretary, has been boasting for months that we have a world-class track and trace system (where’s the app mate?) so why aren’t we getting flights working again and trying to save our airline and tourism industry?

Talking of planes, trains and automobiles why can’t theatres re-open with people wearing masks? If you can sit for hours on a plane why not in a theatre row? Just one confusing policy and I could spend all day illustrating others but I would lose the will to live, even in this new abnormal world!

© AFP 2020 / NICOLAS ASFOURI
Axing Lefty Comics Won’t Save BBC!
However, it appeared to me that Boris hadn’t even bothered to prepare for this week’s Prime Ministers Questions as Kier ‘Smarmer’ wiped the floor with him. It was a pathetic performance, and if he can’t prepare for a dust up with ‘Tony Blair Mark 2’ how can we have confidence that he can beat a real deadly virus?

We must truly be in the ‘new normal’ when I have more faith in the bloke running the Bloated Broadcasting Corporation than the clown running the blooming country!