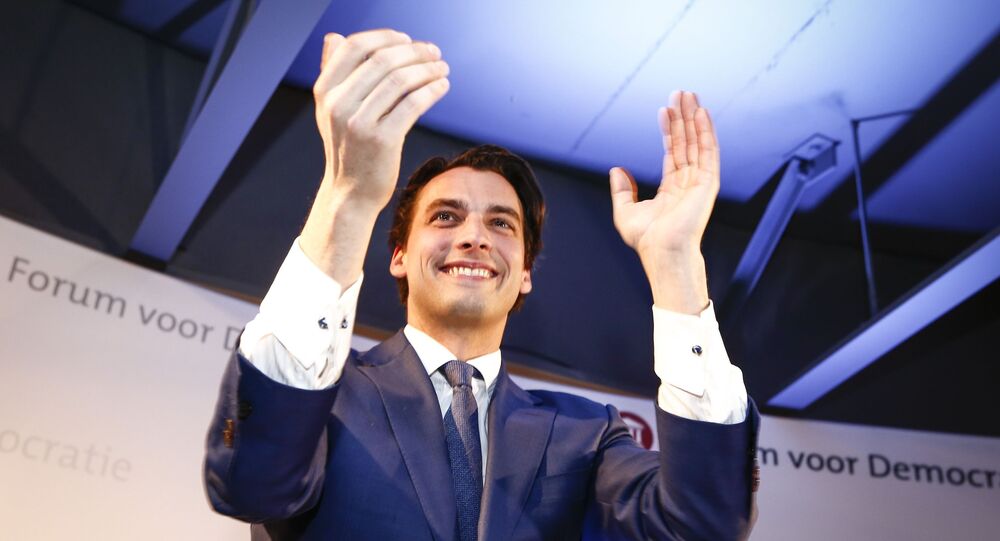 Best Friend of US Ambassador Mistaken for Kremlin Stooge

Thierry Baudet of The Netherlands' leading opposition party Forum for Democracy is best friends with the American ambassador and calls for increased spending on NATO. Still the Dutch mainstream media keep framing him as an agent of Russia.

When asked for their opinion on Russia three nationalities stand out for their unfavourable view: the Americans, Swedes and Dutch. I don't know about Sweden, but I do know for a fact that the mass media in the US and The Netherlands have something to do with this, to put it mildly. They never let a day go by without blaming "Putin" or "the Russian regime" for some wrongdoing somewhere in the world. From sending beluga whales to spy on the Norwegian Navy to secretly shooting pee tapes starring the American president - there's just no end to Russia's evil schemes, if we are to believe the American and Dutch media, and probably the Swedish media too.

Those who speak out against this Russophobia or call for a peaceful co-existence with Russia are at best completely ignored and at worst fiercely attacked. In The Netherlands this practice has led to the absurd situation in which even a politician who is best friends with the American ambassador and calls for more spending on NATO can find himself in a situation in which the mass media will frame him as a Kremlin asset.

Young kid on the block

This happened to Thierry Baudet. If you haven't heard of him yet: think Geert Wilders. Thierry Baudet is Geert Wilders the 2nd. Like Wilders did before him Baudet has made nationalism and anti-immigration politics the corner stones of his party Forum for Democracy. With Wilders he also shares an outspoken rejection of the European Union and an unlimited affection for Israel. Asked for his opinion about Israel at a party congress he stated: "We support Israel unconditionally. Period."

This is where the parallel ends. Baudet is the young kid on the block. His star is rising, rapidly. He started in 2017 with only two seats in the Dutch House of Representatives. Then in 2019 his party became the biggest in the Senate. Also, in four years time Forum for Democracy has become the biggest party in terms of members.

'My friend' the ambassador

Unlike any other party leader in The Hague Baudet keeps warm relations with the American ambassador Pete Hoekstra. He calls him "my friend" and invited him to the 2019 party congress of Forum for Democracy to address the members of his party.

Hoekstra opened his speech by saying that those who attended the congress might ask themselves: "Why would the US ambassador be at a party conference?" And indeed, it's something that had not happened before in Dutch political history: an ambassador giving a speech at a party conference. "It's very simple," Hoekstra explained his presence. "You made the choice to invite me and I made the choice to accept." Hoekstra then thankfully grabbed the opportunity to warn for "the Chinese Communist Party, terrorism and the current Russian government" and to call upon the Dutch government to spend more on NATO.

Baudet subsequently said his party firmly believes the Dutch should increase their expenditure on the military to 2 per cent of their BDP and invited the public to give a big round of applause to confirm this, which they did.

In May 2020 Baudet invited Hoekstra to his TV show on You Tube. Not to talk with him about the The Hague Invasion Act Hoekstra had signed in 2002 as a member of the House of Representatives. Nor to discuss recent threats of the US directed at the International Criminal Court (ICC) in The Hague and at Dutch companies such as Shell because of their involvement in the installation of Nord Stream 2, a gas pipeline running from Russia to Europe. These subjects were carefully avoided by Baudet. Instead he invited Hoekstra to perform a 40 minutes rant against China. Again: never in Dutch history had an ambassador performed in a TV show presented by the leader of a political party. And to date no other ambassadors ever appeared in Baudet's TV show.

In spite of Baudet's warm relationship with the American ambassador, his pledge for increased spending on NATO and his 'unconditional' support for Israel, he is widely regarded as an agent of Russia, or in the words of the Dutch Prime Minister Mark Rutte: "a Russia hugger". And this is why:

In 2015 and 2016 Baudet campaigned against the EU's association agreement with Ukraine. To please Russia? No. Because he dislikes the EU and he doesn't want it to grow bigger.

On several occasions Baudet has said to believe "the Russian threat" is not what it is cracked up to be. Because he tries to be friendly with Russia? No. Because he truly believes Brussels has created this threat to bring unity within the EU.

On the website of Foreign of Democracy it says the party wants to 'normalize' The Netherlands' relations with Russia. For the benefit of Russia? No. Because the tensions between the EU and Russia  "badly affect the agricultural sector" of The Netherlands.

Also, Baudet has stated that the criminal investigation into the downing of flight MH17 in eastern Ukraine is rigged, because one of the suspects, Ukraine, participates in the international organisation that's leading the investigation. Because Baudet thinks it is proven Russia not guilty? No. Because a child can see a suspect should not be appointed to the role of prosecutor in a criminal investigation.

Baudet has been under constant attack from both the Dutch political elites and the mainstream media for having these opinions. It pretty much sums up how the Dutch public is expected to think about Russia: as a grave danger and an immoral entity. Anyone who dares to question these doctrines is seen as an immoral person and a threat to national security. He's bound to be excommunicated.

In April 2020 the framing of Baudet as Kremlin stooge reached a new low. Former socialist broadcaster VARA 'revealed' in a TV special entitled Baudet and The Kremlin that Baudet had been in contact with someone "close to the Kremlin", five years ago, during the referendum about the association agreement with Ukraine. Furthermore they showed two leaked WhatsApp messages from Baudet, one from 2016, the other from 2017, which show Baudet was of the opinion The Netherlands should leave NATO. In the documentary it was even suggested he took money from the Kremlin to take certain positions and that he is a controlled politician because Moscow uses compromising material against him.

The 'news' Baudet had considered leaving NATO three years ago made headlines in the Dutch press. Once again Baudet was accused of doing the Kremlin's bidding. When confronted with the WhatsApp messages Baudet reacted: "I'm not a proponent of withdrawing from NATO." But clearly this statement did not satisfy the bloodhounds of the Dutch press. Had he confessed to've performed sexual activities with children and that he was sorry about it, they probably had forgiven him. But now that it had become known he had considered leaving NATO they found he had committed the ultimate sin. A Dutch withdrawal from NATO would obviously mean the beginning of the end of the military dominance of the US over Europe. And then, what would become of The Netherlands? Once again the Germans, the French or the Spanish would invade, or, God forbid, those evil Russians.

The western press has made a caricature of those who advocate normal relations with Russia and are critical about the expansion of the EU and NATO. They are often labelled 'populists' and 'far right' or 'radical right' politicians. And sometimes they really are, but sometimes they are not. All over Europe, including in The Netherlands, politicians of socialist parties strive for a peaceful co-existence with Russia or express their concern about the EU and NATO. But their voices seldom reach mass audiences. The mainstream media are simply not interested. Framing those who think different about Russia, the EU and NATO as far right populists would obviously not work if the mass found out one doesn't necessarily need to be a radical right-wing person to think different about these subjects.