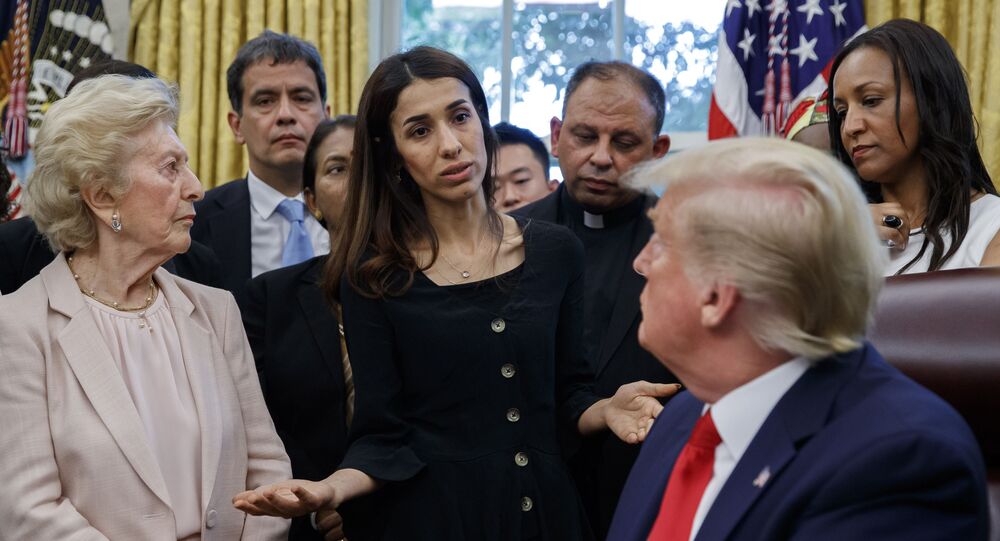 Religion and Nukes, a Toxic Combination

Evangelical Christians have taken a strong grip on Congress and The White House. They think the End of Time is near and are very much looking forward to it. At the same time the US is boosting its nuclear weapons, decreasing its application threshold and withdrawing from nuclear arms control treaties. What can possibly go wrong?

On his first press conference as president of the United States, Donald Trump sent out a warning to the American media. He tried to explain to them that since the US and Russia are both nuclear powers it is essential for both countries to get along well and that therefore the American government needed the support of the American public to strike a deal with Russia. "I've been briefed," he said.

"And there's one thing I can tell you about it: nuclear holocaust would be like no other."

At that time Trump was already under attack because of his alleged collusion with the Russian president Vladimir Putin. "The whole Russia thing is a ruse," he defended himself. "The false reporting makes it harder to make a deal with Russia.

The rest is history. The press didn't listen. Encouraged by the Democrats who kept propagating the collusion hoax, they pushed Trump into a role he didn't want to play: that of a Cold War hawk, showing his muscles to Russia - trying hard to prove them wrong about the collusion allegations.

He furthermore withdrew from the Intermediate-Range Nuclear Forces (INF) Treaty, announced that the US will pull out of the Open Skies Treaty - and, because of his fruitless attempts to get China involved in negations, he has even put the last remaining nuclear arms treaty with Russia at stake, the New Strategic Arms Reduction Treaty (New START). New START is due to expire in February 2021.

As long as Trump is in the White House it's not likely the US will ever use its nuclear arsenal. Although known for his sometimes erratic and grotesque behaviour, Trump does not seem to be a man to light-heartedly launch a nuclear strike on Iran, North Korea or any other country that refuses to submit itself to the US.

Yearning for the End of Times

There is however a looming danger of a president entering the White House who will. Since Ronald Reagan’s 1980 victory over Jimmy Carter, Republican presidential candidates have benefitted from enthusiastic support of white evangelical voters, especially in the swing states.

About one in four American adults belong to an evangelical Christian denomination according to a Pew Research Center 2014 study, making evangelicals, the most common religious group. Although no evangelical himself, Trump knows he's dependent on evangelicals for his re-election, and therefore plays along with them. He even went as far as to appoint Florida televangelist Paula White as his faith advisor. He even welcomed her on board of his White House staff.

There's something frightening all evangelicals seem to have in common: their yearning for the End of Time and their willingness to help history a hand to get there. Among them are vice-president Mike Pence and secretary of state Mike Pompeo.

"We will continue to fight these battles," Pompeo said at a “God and Country Rally” in 2015. "It is a never-ending struggle ... until the Rapture."

This "Rapture", Pompeo speaks about, is key to understand what makes many evangelicals tick. The biblical prophecy of the Rapture is about the ascent of Christians, both dead and living, into heaven to meet Jesus Christ. Evangelicals clamour for this day to arrive.

The prophecy of the Rapture relates to two other prophecies. The so-called Armageddon will be the last battle between good and evil. It will take place before the Day of Judgement when God will judge everyone who lived.

As The New York Times observed of Pompeo, “no secretary of state in recent decades has been as open and fervent as Mr Pompeo about discussing Christianity and foreign policy in the same breath. That has increasingly raised questions about the extent to which evangelical beliefs are influencing American diplomacy.”

Israel fulfils a central role in the biblical belief system of evangelicals, most notably dispensationalist Zionist Christians, nicknamed the "Armageddon Lobby". They believe the establishment of the nation of Israel in 1948 and the gathering of Jews in Israel will precede the Rapture.

Although they support Israel, they basically do not respect the Jewish faith. They think, after the Rapture, the Jews will eventually accept Jesus as the rightful Messiah. These converted Jews will fight and win the final battle against the anti-Christ, known as Armageddon.

This will trigger the return and reign of Jesus.

Many think the end-of-days will occur in their lifetime and think recent and past events have been foretold in the biblical books of Revelations and Ezekiel. They even believe they can participate in the events triggering the Rapture by supporting Israel and facilitating the emigration of Jews to Israel.

George W. Bush is said to have invaded Iraq because of a religious, messianic calling. "Gog and Magog are at work in the Middle East," he entrusted the French president Jacques Chirac in the run-up to the war. "Biblical prophecies are being fulfilled.

This confrontation is willed by God, who wants to use this conflict to erase His people’s enemies before a new age begins.” Chirac had no idea what Bush was talking about, but since he knew he was an evangelical he consulted a theologian.

He explained to Chirac that Bush was referring to the Book of Ezekiel, according to which a great world army will form, brought together by a certain Gog, perhaps supported by Magog - and that this coalition of peoples will bring a final battle upon Israel.

During the Cold War, many evangelicals identified the Soviet Union with the evil Gog. Some still identify Gog with Russia, but they now tend to stress its allies among Islamic nations, especially Iran.

The advent of the atomic bomb in 1945 made dispensationalist evangelicals find atomic war foretold in biblical texts. They insisted they were not advocating nuclear war; they were simply viewing current events in the light of the prophecies.

© REUTERS / TOM BRENNER
Trump Signs Order to 'Advance' International Religious Freedom Through the Use of 'Economic Tools'
Nevertheless, they encouraged passivity toward the threat, because one cannot resist something that is foretold in the Bible. And why bother about a devastating nuclear war when it will probably come after the Rapture? To them, only Jesus' return will end the nuclear threat.

With people like this having a strong grip on one of the world's leading nuclear powers, what can possibly go wrong? They will not give up their faith. The only solution is a president in The White House who will follow in the footsteps of Ronald Reagan and stop the madness of the renewed nuclear arms race.