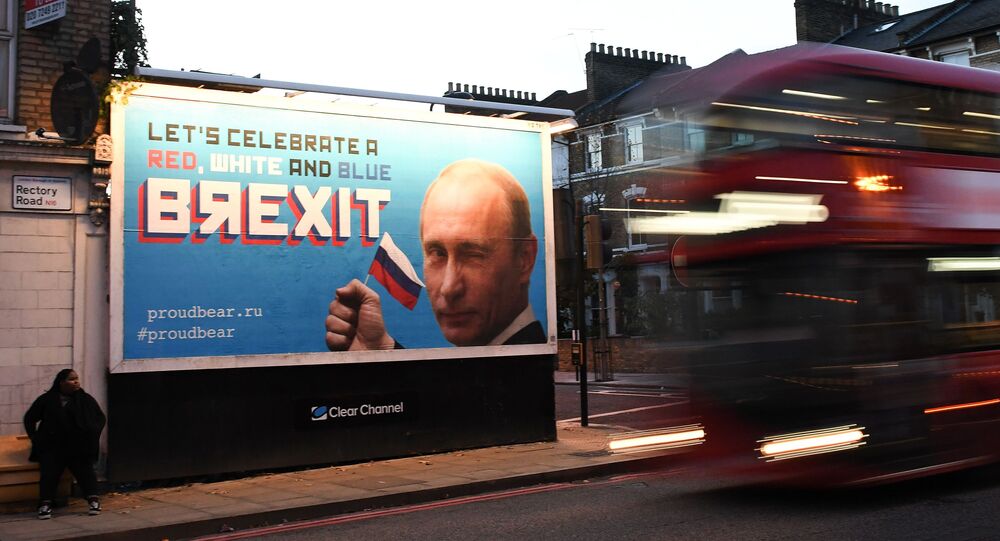 To prevent Europe from being squashed between the US and China, Europe needs Russia. A free trade zone from Lisbon to Vladivostok would boost Europe's economy and save the continent from a devastating war. This scenario has become more realistic since Brexit.

France and Germany should work towards economic unity in order to secure peace and to prevent Europe from becoming an "economic colony" of the US or a "military colony" of Asia, one of the pioneers of the European integration process, Heinrich Mann wrote in his 1924 essay V.S.E. (Vereinigte Staaten von Europa). He also considered Russia "economically and intellectually indispensable" to Europe. "Europe exists only including Russia," he thought.

Mann was ahead of his time. Although Europe is far from becoming a "military colony" of Asia or an "economic colony" of the US, he understood the importance for Europe to unite, in order not to become dominated by other world powers.

Unfortunately those who united Europe in the post-war era did not strive for a Europe with Russia. They may have had good reasons for that in the decades Russia was a communist country, but after the collapse of the Soviet Union, they should have reached out.

The Soviet Union's last head of State, Mikhail Gorbachev, and the first Russian presidents Boris Yeltsin and Vladimir Putin have on many occasions made clear that they strove for closer ties with the rest of Europe. "We are resolutely against the division of the continent into military blocs facing each other, against the accumulation of military arsenals in Europe, against everything that is the source of the threat of war," Gorbachev said during a visit to Prague in April 1987. "In the spirit of the new thinking, we introduced the idea of the 'all-European house'." During a visit to Rome in November 1989, Gorbachev sketched out the notion of "Our Common European Home" as a commonwealth of sovereign and economically interdependent nations.

Europe From the Atlantic to the Urals

Three decades before Gorbachev, in 1959, French President Charles De Gaulle had famously stated that it “is Europe, from the Atlantic to the Urals … which will decide the fate of the world”. He regarded historical and geographical Europe as a way of combining and increasing the power of nation-states in order to play a prominent role on the global scene. He never doubted that Russians were Europeans, and he always spoke of 'Russia' and not of the Soviet Union, because in his opinion, regimes are temporary, but nations endure. He believed that once the communist regimes had collapsed, Western Europe, led by France, would reintegrate the continent.

Russia-Germany Combination Scares the US

Nothing of the sort happened. After the collapse of the Soviet Union, the US opted for a winner-take-all strategy. They strengthened their military dominance over Europe by pushing former Warsaw Pact countries into NATO membership. In recent years, starting under the Barack Obama administration, the US has drawn Europe into a new Cold War with Russia. The US forced the EU to impose sanctions on Russia and spend more on NATO - and they started feeding the European press with a continuous flood of agitprop, scary stories and conspiracy theories about 'evil Russians'.

It was all laid out in the so-called Wolfowitz Doctrine, authored by Under-Secretary of Defence Paul Wolfowitz, which was leaked to the New York Times on 7 March 1992. “Our first objective is to prevent the re-emergence of a new rival, either on the territory of the former Soviet Union or elsewhere, that poses a threat on the order of that posed formerly by the Soviet Union," it reads.

Former US Secretary of State Zbigniew Brzezinski was of the same opinion. "It is imperative that no Eurasian challenger emerges, capable of dominating Eurasia and thus also of challenging America," he wrote in his book The Grand Chessboard that came out in 1997.

"The primordial interest of the United States, over which for a century we have fought wars - the First, Second and Cold War - has been the relationship between Germany and Russia (..) The combination of German technology and capital, and Russian resources and manpower has for centuries scared the hell out of the United States."

And so, there you have it: It's not Russia sawing discord within Europe, as the western mainstream media is hammering into the heads of the public, day in, day out. It's the US, in order to keep Russia isolated from the rest of Europe.

With the emergence of China as a global player, and the shrinking significance of the US in the world economy, the US is even more determined to keep the European Union separated from the rest of the Eurasian continent. It therefore is rebuilding the Iron Curtain along a thousand mile stretch from the Baltic Sea to the Black Sea, bringing in troops, tanks, armoured vehicles, heavy artillery - and building an anti-missile shield in Romania and Poland.

The ever-increasing tensions between, on the one hand, the US and on the other hand Russia and China threatens peace and prosperity in Europe. Luckily some in the EU understand this. EU Foreign Policy Chief, Josep Borrell has stated that the EU is not going to launch a "cold war" with China. In May, the EU's top diplomat admitted that Brussels faced pressure to choose sides in the growing tensions between the US and China, but stated that the bloc intends to "follow our own interests" instead and avoid "being instrumentalised" by any of the sides.

The EU must move to step two now and normalise its relations with Russia, by easing military tensions and lifting sanctions - and by beginning to build a free trade zone from Lisbon to Vladivostok. In 2010 Russian President Vladimir Putin presented this vision in the German newspaper Süddeutsche Zeitung. "We propose the creation of a harmonious economic community stretching from Lisbon to Vladivostok," Putin wrote. "In the future, we could even consider a free trade zone or even more advanced forms of economic integration. The result would be a unified continental market with a capacity worth trillions of euros."

French President Emmanuel Macron has applauded this vision. “We believe in Europe from Lisbon to Vladivostok," he wrote on his Twitter account after a meeting with Putin in 2019.

It will, however, be a David versus Goliath fight to achieve this goal. The US is profoundly embedded in Europe. Not only militarily, but also via its many think tanks and NGOs, its influence on the media and its surveillance apparatus. The US does not shy away from blackmail to make European governments act in its interests. At least, that is the experience of professor Werner Weidenfeld, who coordinated relations with the US for 12 years for the German government. "If we disagree with the Americans on a serious issue, they put intelligence material on the table, compromising for Germany, and they say: "Either you co-operate or you are finished," Weidenfeld declared.

The relations between the US and Germany are in an acid test now. The US openly threatens with sanctions against Nord Stream 2, an undersea pipeline that will allow Russia to increase gas exports to Germany. These may not only affect German and European companies, but government departments engaged in administrative and technical work for Nord Stream 2 as well.

In any event, with Brexit the EU faces a historical chance to normalise its relations with Russia and to start building a unified continental market. The British have always been more connected to the US than to the Eurasian continent. And they've always kept Russia at distance as much as they could.

Europe would be even better off if The Netherlands left the EU too. "The Dutch serve as a vital transatlantic anchor in Europe," US ambassador in The Hague George Sobel wrote in his farewell address in 2005. "As one of the original six EU members, the Dutch ally with the British to counter Franco-German efforts to steer Europe off a transatlantic course. (...) Strengthening US-Dutch ties across the political spectrum is necessary to ensure that the Dutch continue to enlist others to pursue interests in line with the US."