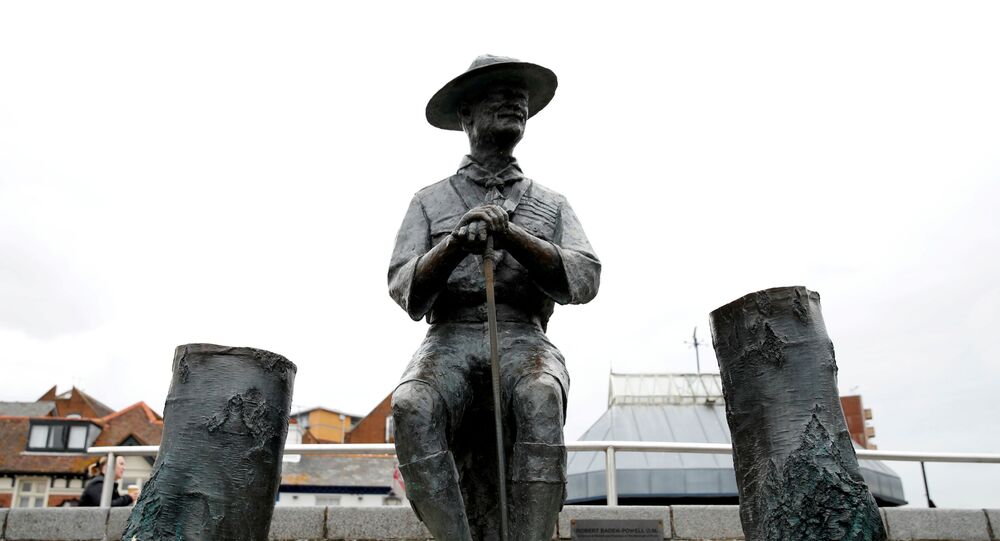 Some of the arguments generated by the decision of  Bournemouth, Christchurch and Poole Council to remove their Robert Baden-Powell statue highlight the hypocrisy and latent racism which pollutes much of England.

I watched a middle-aged woman on Good Morning Britain proclaim that the statue should stay in place despite Baden-Powell’s well documented support for Hitler, fascism and virulent homophobia because her children ‘often climb onto the statue’ and ‘he did some good’ in his life. I despair at the attitudes of those like her who say they are sticking up for ‘British values’ and ‘British history’ by defending a Hitler loving Nazi sympathiser.

Baden-Powell was enthusiastic about the fascism that began spreading through Europe after World War I. He visited Italy in 1933 and wrote admiringly about the "boy-man" Benito Mussolini who had absorbed his country's Boy Scouts into a thriving new nationalist youth movement. The same Mussolini who ordered the Turin massacre of 1922 two months after seizing power. Three days of attacks on trade union members opposed to fascism resulted in twenty four brutal deaths, some bludgeoned and others tied to the back of lorries and dragged through the streets.

If Baden-Powell had had his way, the Boy Scouts might have formed close ties with the Hitler Youth. In 1937, he told the Scouts' international commissioner that the Nazis were "most anxious that the Scouts should come into closer touch with the youth movement in Germany." Baden-Powell met with the German ambassador in London and was invited to meet the Führer himself, though the war prevented him from visiting the Third Reich. But he continued to admire Hitler's values, writing in a 1939 diary entry that Mein Kampf was "a wonderful book, with good ideas on education, health, propaganda, organisation etc".

Consistent with the morally repugnant and ethically schizophrenic British fascist thugs who regularly attend Remembrance Day ceremonies paying tribute to the men and women who lost their lives fighting fascism while displaying Nazi salutes and wearing Nazi regalia so we have people defending a Hitler sympathiser in the name of British values and history. It is behaviour bereft of moral content or consistency.

On the night of November 9, 1938, violence against Jews broke out across Hitler’s Germany. German propaganda minister Joseph Goebbels and other Nazis carefully organized the pogroms. In two days, over 250 synagogues were burned, over 7,000 Jewish businesses were trashed and looted, dozens of Jewish people were killed, and Jewish cemeteries, hospitals, schools, and homes were looted while police and fire brigades stood by. The pogroms became known as Kristallnacht, the "Night of Broken Glass," for the shattered glass from the store windows that littered the streets.

The morning after the pogroms 30,000 German Jewish men were arrested for the "crime" of being Jewish and sent to concentration camps. Hundreds of them perished. It was soon the fate of millions. Some Jewish women were also arrested and sent to local jails. Businesses owned by Jews were not allowed to reopen unless they were managed by non-Jews. Curfews were placed on Jews, limiting the hours of the day they could leave their homes.

Almost one year later, 6th October 1939, Lord Baden-Powell, he was knighted by King Edward in 1909, wrote in his diary about how “wonderful” Hitler’s Mein Kampf was, the book that underpinned his whole vile philosophy of anti-Semitism and white Aryan race superiority. Homicidal anti-Semitism alongside violent suppression of trade unionists and the banning of trade unions was clear German government policy before 1938 but was crystallised by Kristallnacht. Yet Baden-Powell’s admiration of Hitler was clear. Yeah let’s have a cute wee statue to such a morally progressive man. He really sums up ‘British values’!

Sure he may have done some good work with young boys through his formation of the Boy Scout movement but Jimmy Saville also made a career out of ‘fixing it’ for young people to realise their dreams to meet celebrities and such like. In the process he was grooming hundreds of them for bestial sex abuse and raped several children as young as nine. He was also Honoured and Knighted by the British Establishment. Should we ignore his horrific crimes against children and remember only the good work with a statue? Of course not.

History Is About Books, Recording and Teaching Not Statues

This whole ‘preserving history’ and ‘protecting the past’ argument is utter pish. History is written by the rich and powerful of the day and is therefore always distorted to reflect their values and opinions. Constant revision of history is necessary to seek the truth of the past. People say the likes of Edward Colston the slave trader was a ‘man of his time’ and therefore should be remembered by a statue. Jack the Ripper was also a ‘man of his time’ but I don’t see statues to Jack the Ripper in and around London. He is remembered in books and museums where he belongs.

But won’t we ‘forget our history’ without such statues some argue. Statues or plaques of rats are not what remind us of the Bubonic plague and the 50 million deaths it caused throughout Asia, Africa and Europe in the 14th Century. The Black Death is remembered primarily because it was recorded, studied, analysed and re-visited by medical practitioners, anthropologists and others. Stone or metal memorials of such tragic events are much less important than proper and accurate recording in publicly accessible forms.

History isn’t recorded in statues. They are depictions of cultural domination and hegemony of the rich and powerful. Nazi sympathisers, slave traders, anti-Semites and racists deserve to be noted, investigated, recorded and exposed, not perched on plinths in cities across the UK. No wonder the Daily Mail is so keen to whip up anger and opposition to any plan to remove Nazi sympathiser Lord Baden-Powell from Poole in Dorset as they are fellow travellers of the Scout founder. Not everyone knows that the Daily Mail and its owner, Harold Sidney Harmsworth, were keen supporters of Hitler and fascism right up until the outbreak of war with Germany in 1939. Just like so many other Nazi sympathisers Harmsworth was ‘honoured’ by the British Establishment and made a Baron and Lord, Lord Rothermere to be precise. They dropped their open fascist support after 1939 but their associated racism, bigotry and ugly xenophobia has continued uninterrupted to the present day.

History is recorded in books, museums and history departments. It requires constant assessment and reassessment and subjection to rigorous analysis to deliver as much accuracy as possible. The real threat to history is not from those who have taken the time to read, study and acquire the knowledge that fuels their desire to remove statues of slave traders, racists and Nazi sympathisers from their high streets but from the educational vandals who would rather fund tax cuts for millionaires and nuclear weapon upgrades than properly fund schools, public libraries and access to higher education for all.

To those defending statues in the name of ‘history’ I ask who you voted for in 2010, 2015, 2017 and 2019? If you voted Tory you sanctioned Library closures, school funding cutbacks, reductions in public museum support and more expensive, and therefore, exclusive higher education. You have no right to defend statues in the name of history while you support a political party that stands for the eradication of the very services upon which history depends. The truth is the campaigns to remove the slave traders, racists and Nazi sympathisers are more enlightening and educational than the old indulgent statues ever were. Let’s remember the oppressors but honour their victims, not them.