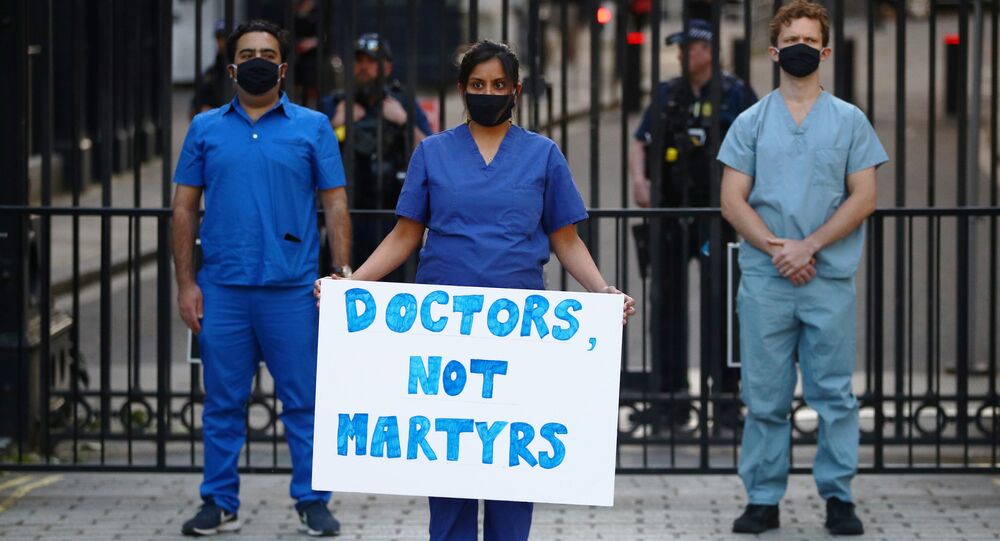 It’s become almost impossible to have a rational debate about Covid-19 and the policies that governments have brought in in its wake, as the virus has gone from being a health issue and instead become a religion.

When a man stops believing in God, he doesn’t then believe nothing, he believes anything’ is the quote usually attributed to the writer GK Chesterton, but actually emanates from comments made by the Belgian playwright and translator Emile Cammaerts, who was paraphrasing Chesterton’s creation Father Brown, who made similar observations.

In Britain, we’ve become increasingly atheistic, but Cammaerts/Chesterton’s warning has been proven correct in the way that for some, a new religion has replaced the old ones: The COVID-19 religion.

Consider the hallmarks of organised religion:

The core belief is that Covid-19 is a huge risk to public safety. It’s the greatest threat we have ever faced- and that all measures used to curtail its spread- however draconian and inhuman- even extended lockdowns, preventing people visiting loved ones in hospital and changing the whole way we live our lives with permanent ‘social distancing’- are justified.

The ‘priests’ are the politicians, media figures and public health officials who tell us in catechisms what we should be doing: ‘Stay Home, Protect the NHS, Save Lives’; ‘Stay Alert, Control the Virus, Save Lives’.

The ex-communication of heretics can be seen in the way that ‘non-believers’ are removed from social media platforms, blocked or unfollowed or even in some cases, threatened with prosecution.

The rituals include the daily televised press conferences, where journalists who all believe in the new religion ask questions of the priests about how the religion can best be followed, and of course, the weekly Thursday night clapping.

The wearing of certain items to show you are a true believer can be shown in people putting on face masks. They are not yet mandatory in the UK, but there are now calls for them to be made so, despite the WHO not recommending their use in public.

As for policing the public, well we’ve not only got the actual police, who have suddenly appeared from nowhere but members of the public too, who are encouraged to report non-believers to the authorities.

We can also add that in place of a belief in a ‘second coming’ of Jesus- shared by Christian, Islamic and Bah’ai faiths,  we now have a belief in the absolute inevitability of a ‘second wave’, which will be even more calamitous than the first.

How ironic that in a country where it’s become culturally hegemonic to make fun of the ‘old’ religions, particularly Christianity, and those who believe in God, that we’ve ended up with a new religion which is far more controlling.

The authorities seem to have stolen a trick from Constantine the Great.  Jesus was crucified under Roman rule, but the Romans later claimed Christianity as their own.

Today’s equivalent is to have politicians who have been undermining the NHS for years, who have been privatising it, and reducing the number of its beds, now lavishing it with praise and urging us to 'Protect' it and publicly celebrate it.

The COVID religion has seen Britain gripped by a wave of irrationality, unprecedented in living memory. The point is not that there wasn’t a virus and that sensible measures such as washing ones hands more often and self-isolating if coming down with the symptoms shouldn’t have been taken.

The point is that the response has been massively disproportionate and that critical thought has gone out of the window.

COVID may not be ‘just a cold’ but it isn’t the Black Death either. Yet that’s the basis on which many appear to be acting.

We hear that bookstore chain Waterstones is to put its wares under 72-hour quarantine if they are touched by customers- even though we know that the virus can’t survive long on paper- and that newspaper deliveries have carried on quite happily in Britain since March.

A two-meter social distancing rule has been imposed, which has no scientific justification and which even a government advisor admits was ‘conjured out of nowhere’.

People are crossing the road to avoid passing other people, even though the risk of the virus being transmitted in such a way is infinitesimal.

But you can’t really point any of this out because you’ll get ‘guilt-shamed’ i.e. accused of ‘wanting people to die’- when in fact evidence is growing that lockdown together with other disproportionate COVID ‘response’ policies like the mass hospital inpatient discharge programme- have killed, or will kill, more people than they have saved. I got blocked by someone on Twitter simply for forwarding them a paper in the British Medical Journal showing how only a third of the excess deaths in England and Wales could be explained by COVID -19.

It’s not just that true believers cannot accept any other view, it seems they don’t even want to look at any evidence which runs counter to it.

If we do want to get back to normal living, we have to acknowledge that we are dealing with here is the establishment of a new state-sponsored religion. The last time we had such zealotry in the UK was back in the 1650s when Oliver Cromwell and the Puritans were in charge. That was a grim time too. As in the ‘lockdown Britain’ of 2020, inns were closed, places of public entertainment shut down and sports (including horse-racing) were banned.

GK Chesterton- or is that Emile Cammaerts and Father Brown?-  show us a possible way out. In order to stop believing in anything, it would help if we went back to believing in something.

A belief in God at times like these is not only is great solace, but it is also more likely to stop us believing in the New Covid-19 religion. What powers this new religion is not love but fear. Fear of death which is also fear of living.

But if you believe in God and the afterlife, and have a simple faith, you have less fear of death and consequently are more likely to embrace life in all its infinite glory. And that most definitely does not mean accepting that anti-human two-meter social distancing is ‘here to stay’.

© REUTERS / POOL New
Bad Prescription: NHS Staff Prepare to Sue UK Gov't Over Advice to Reuse PPE Amid COVID-19 Pandemic
No one back then wanted to turn viruses into religions.

While western leaders nowadays don’t really do God, African ones still do and get laughed at for their faith.  Back in April, Tanzania’s President John Magufuli declared three days of national prayer to help defeat Coronavirus.

Six days ago Magufuli said the virus had been defeated by prayer. Some might call that daft. But is saying ‘Coronavirus is there but we should fight it without fear’ more illogical than what has been happening in Britain these last few months?