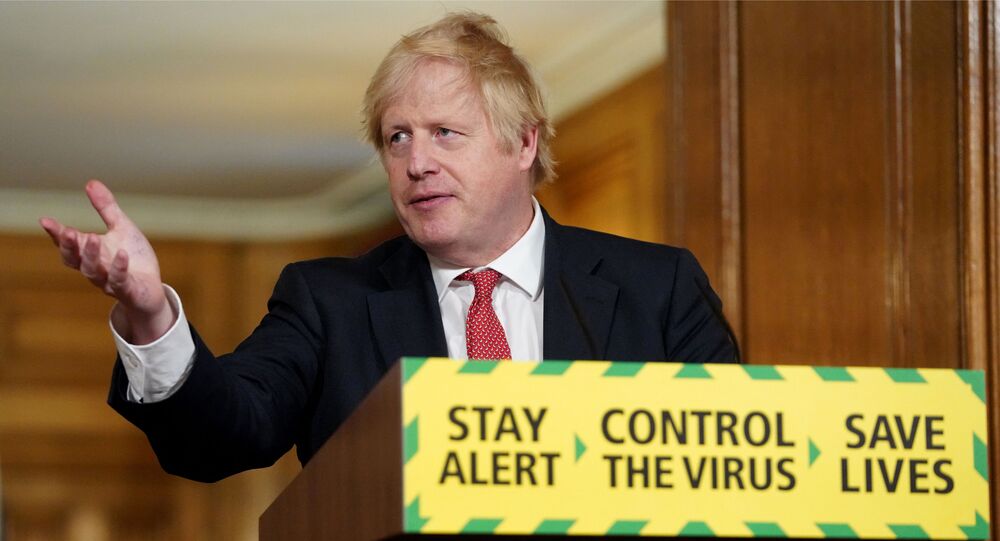 Common sense Boris? What a pity you didn’t use that back in early March?

It was common sense back then to follow Italy and Spain’s lead and lockdown firmly and ban all large public events. But no, Boris you and your advisors bet the house on allowing Cheltenham to go ahead and your gamble has failed miserably. I’m sorry to say it but that single decision means that you and your scientific experts have blood on your hands.

Common sense Boris? Why didn’t you use common sense before your pathetic confused address to the nation on Sunday?

© REUTERS / TOBY MELVILLE
Killing Me Softly: Boris Johnson's New Lockdown Reduction Plan Explained
Did we really have to wait ten days for that rambling confused address that just spread more misinformation to the population? Where was the common sense in that broadcast?

People say Winston Churchill is your hero but this was no ‘fight them on the beach’s’ stirring call to arms, it was more like an address by the bull dog on the Churchill Insurance adverts that used to be voiced by the comedian Vic Reeves. In fact, Vic at his most surreal, would have made more sense.

What should have been Common Sense

Can you have a word with Dominic Raab as it would have surely been common sense for him to get across his brief before Skyping the TV news studios the next day and adding more confusion to the public?

Common sense Boris would have been to keep your trap shut earlier in the week and keep off twitter rather than raising false hopes that the lockdown was going to be lifted and as the headlines screamed Monday was going to be a ‘Happy Monday’.

I don’t know about Happy Mondays but we could do with Shaun Ryder giving Boris some harsh, direct, even foul language advice because this approach to the pandemic is more fu**ed up than Bez after a bender in Ibiza.

Boris, Common sense would have been to publish the 52-page ‘common sense manifesto’ before turning the camera on.

Common sense would have been to get or keep Nicola Sturgeon and that bloke in Wales on side before telling people over the weekend that they could go back to work on Monday and then changing it to Wednesday.

Common sense would have been to talk to the CBI, business leaders and the trade Unions before the press conference on Sunday. I thought that this was why the conference was delayed to then? Surely It would have been common sense to get all these measures and discussions sorted before speaking to the people?

Common sense would have been to use the term common sense on Sunday and not use it as a soundbite on Monday after you had sown confusion and then attempted to drown us in a tsunami of recommendations on Monday?

© REUTERS / SIMON DAWSON
UK Chancellor Rishi Sunak Prolongs Furlough Scheme to October
Common sense would have been to tell us all to wear masks on public transport and in enclosed spaces weeks ago, not now when we are the sickest country in Europe.

Common sense would have been to allow small garden centres and nurseries to stay open along with the big boys like B&Q. The benefits, both mental and physical, of gardening have been stressed by everyone from Alan Tichmarsh to Monty Don.

Common sense would allow you to meet members of your extended family if you are now allowed to let a plumber or a cleaner in to your house but not someone you know.

There is hardly any common sense in the new rules as far as I can see.

You can play golf with a member of your family household but most golfers I know play golf to get await from their family!

When you go for a dog walk you can talk to strangers if you keep social distance but not to your uncle and Auntie or Granddad if you bump into them.

These nonsensical rules ae all based on keeping the R down but increasingly I feel that this Government don’t know their “R’s” from their elbow.

It is no laughing matter of course for our coppers who have to enforce these Jabberwocky rules.

Is it really common sense to enforce quarantines on people coming into the UK now?

The airports, just like New Zealand and Australia, should have been closed down months ago.

How the hell are Cops meant to check that tourists and returning Brits are actually self-isolating at home?

Now of course Spain have said that they will introduce similar rules. So that the holiday in Benidorm is over, the tourist trade in both countries knackered and most airlines going bust!

© REUTERS / Paul Hanna
Michael O’Leary: Ryanair Boss Stokes Anger for Saying Terrorists are Typically Muslim Men
I agree with the boss of Ryanair (and that’s a line I never thought I would write!) Michael O’Leary who says, “these are idiotic measures and not scientific and will not stop the spread of coronavirus.”

Then of course Boris used no common sense when he did a cosy deal with Macron to exempt the French and then the Irish!

O’Leary is calling for passengers to wear masks along with his staff and to have temperature tests before boarding. That seems more practical, enforceable and an effective way of stopping the spread of the virus.

I love the Irish and the French but are they less likely to spread the virus then the Spanish or the Italians? It is a nonsense the moment you start exempting one or two countries from the others, isn’t it?

I understand that we have to get the economy running again but is it right to, as I said in a previous column, to use working class people as ‘Lab rats’ to check just how dangerous it is out there?

I wouldn’t go as far as Jeremy Corbyn and declare this as a class war but you have to take note of the fact that the Office for National Statistics stated yesterday that security guards, care workers, construction workers, plant operatives, cleaners, taxi drivers, bus drivers, chefs and retail workers are all at a greater risk of dying from Covid-19 according to their statistics.

There is no way that every workplace can be checked for these new health and safety rules on social distancing by Wednesday and the Unions say it could take up to 2 weeks to get anywhere near this. So why should ordinary workers be exposed to this risk? Answer - they shouldn’t, someone needs to slam the brakes on to this so-called road map now as it is potentially a death trap!

Boris dithered and delayed over imposing a real lockdown and protecting us but now seems hell bent on driving us all back to work and school without the adequate protections being in place. Someone must force him to do a handbrake turn or we must replace the driver.