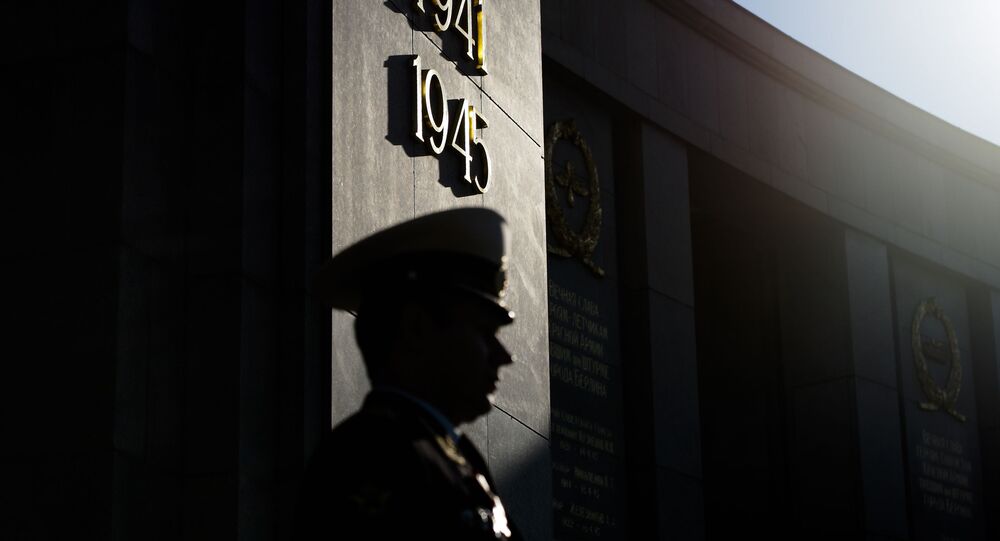 From WWII to COVID-19 Denial

Donald Trump’s apparent denial of the Soviet Union’s role in defeating Nazi Germany will perhaps go down as the “finest hour” for this delusional president. But a practical consequence of such denial-mentality is America will lose the “war” against COVID-19.

On the occasion marking the 75th anniversary of victory over the Nazi Third Reich, the Trump White House made no mention of the Soviet Union’s indisputable military achievement of vanquishing the German fascist regime, instead implying that the US and Britain were the sole victors.

Trump added for vainglorious good measure: “The American spirit will always win. In the end, that’s what happens.”

This outrageous falsification of history takes American absurdity to a whole new exceptional level. There has always been a cloying tendency in US popular culture to overstate the role played by America in defeating Nazi Germany. Hollywood films like ‘Saving Private Ryan’ are unbearable to watch for their vanity and self-regarding Americanism.

© Photo : Our Victory
One Song, 29 Languages: People From Around the World Perform Soviet WWII Victory Anthem in a Video
But for Trump and his White House to openly claim it was Britain and America that won World War Two without even mentioning the colossal sacrifice of the Soviet Union, really takes the distortion and denial of reality into unchartered territory.

For three years, 1941-44, the Soviet Red Army fought the Nazi Wehrmacht single-handedly. The British and American opening of the Western front with their Normandy landings in June 1944 came as the Nazi regime was crumbling from sustained Soviet counter-offensive and epic battles. Six million Nazi troops were killed in the Eastern Front, compared with one million on the Western Front. The Red Army defeated the elite SS divisions paving the way for the Soviet routing of Hitler’s bunker – the Third Reich’s last stand – in Berlin.

© Sputnik / Haldei
VE Day 75: Why Eisenhower Overruled the British and Let the Red Army Win the Race to Berlin in 1945
As many as 27 million Soviet citizens died in the heroic war against Nazi Germany, including up to eight million Red Army soldiers. By contrast, the Americans and British each lost less than half a million troops.

Trump’s contemptible ignorance is matched by his Secretary of State Mike Pompeo who also used the 75th anniversary to distort the liberation of Europe by the Red Army from Nazi Germany as supposedly leading to a tyrannical occupation by Soviet communism in the postwar decades.

This kind of delusional thinking is not just risible and repugnant. It has practical consequences which can be ruinous. For if the Trump administration can be so disconnected from reality, then its policy choices on other matters will be likewise absurd and dangerous.

Take the administration’s policy of blaming China for the COVID-19 pandemic. Trump and his officials are accusing China for “covering up” and even inflicting the virus on the US. This “logic” is based on fantastic, unscientific myths, which is creating a dangerous slippery-slope towards confrontation.

© Sputnik / Mikhail Kuleshov
Online Rage as White House Dubs US, Britain ‘Victors Over Nazis’ Without Mentioning USSR
By pushing China for financial reparations over Covid-19 deaths and economic damage in the US, Trump is in denial over his administration’s abject failings to contend with the epidemic. But so desperate is Trump’s denial of reality, he is talking up an anti-China rationale that inevitably could lead to war.

The same goes for America’s chances of successful recovery from the pandemic. Trump is goading his nation to reopen the economy pretending that it is safe to do so without adequate testing and protections. Of course, this president views complex public health issues through the grubby lens of making financial profit.

While he is urging his country to reopen – in the pretense that the “American spirit will always win” – Trump is ignoring the reality that his own White House has become a hotspot for Covid-19 infection. Three of the administration’s top health experts are in quarantine due to infection fears. Vice President Mike Pence is reportedly self-isolating after his press secretary tested positive for the disease. A valet to Trump has also been infected.

Kevin Hassett, an economic advisor to Trump, told US media at the weekend that the White House West Wing has become a “scary place to work” – such is the increasing risk of administration staffers succumbing to COVID-19.

Trump has previously likened the fight against the disease to a war. He incessantly congratulates himself for handling the epidemic which last week he compared to the 1941 Japanese attack on Pearl Harbor.

This president is a walking contradiction from his own delusions and absurdities. He may be right about the “Russiagate" nonsense and a lot of the “fake news” US corporate news media. We can give him credit on that score. But if Trump can’t even acknowledge the fundamental facts about World War Two and in particular the decisive role played by the Soviet Union, then we should know that his administration is doomed to further failure, specifically in relations with China and in mismanaging the COVID-19 pandemic.