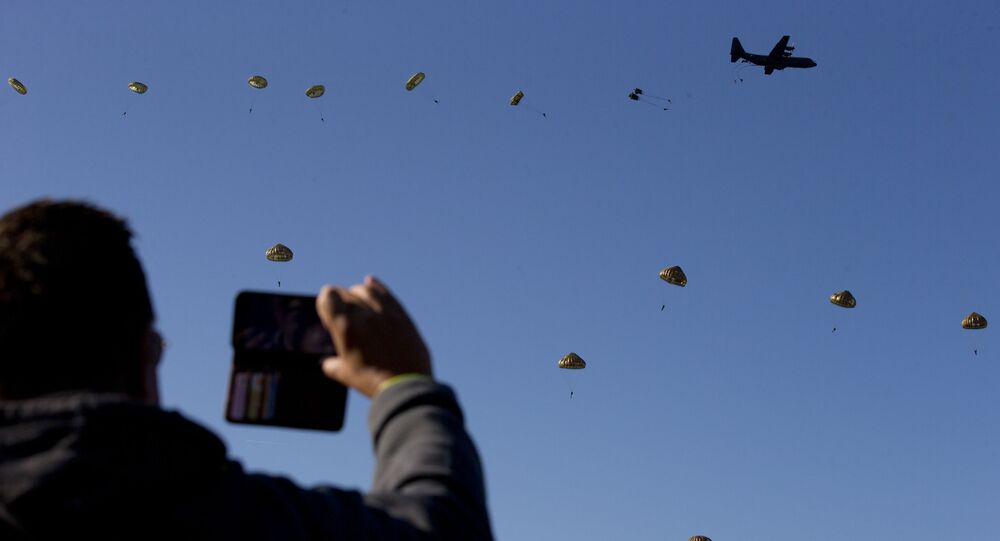 For the 75th time in a row Europe celebrates its liberation. There's no doubt Nazi Germany was beaten. But what are American troops doing on a continent that's supposed to be free and that's clearly not America?

From 1941 until 1945 Over 400,000 American servicemen lost their lives in their fight against an occupying power that raged horribly against Jews and other innocent civilians. These men have made the ultimate sacrifice and it's a good thing they are still being remembered and honoured.

Still, one might sometimes wonder: Whatever happened to their legacy? The Soviets, Canadians, British and Poles went home after they had beaten Hitler; but the Americans stayed. Until today US troops are stationed all over Europe, and have even expanded their territory eastward. Although operating within the framework of NATO, they are not placed under European command. All military in Europe, including European servicemen have always been under the command of an American general, ever since NATO began.

In my country, The Netherlands, fifteen to twenty American B61 nuclear bombs are being stored on a military airbase. The Dutch Air Force has no control over them. When the US decides to carry out a nuclear attack, Dutch pilots are expected to drop the bombs without hesitation. The same goes for pilots on airbases in Germany, Belgium, Italy and Turkey, where the US stations nuclear weapons. They are under American command. They are simply expected to do as they are being told by the US.

It's something one would not expect to see in countries that are supposed to be sovereign. And it certainly doesn't make one feel safe either. By storing nukes on one's soil one turn itself into a nuclear target.

The biggest demonstrations in The Netherlands ever were those against the nuclear arms race. In the early 1980s hundreds of thousands of Dutchmen flocked the streets of Amsterdam and The Hague demanding a nuke-fee Holland. Also, in 1985, a petition against the installation of American cruise missiles, signed by 3,7 million people, was handed out to Dutch Prime Minister Ruud Lubbers. To no avail. For some reason these missiles were an offer the Dutch government couldn't refuse.

There seems to be no democratic control at all over military activities of the US military on Dutch soil. It's impossible for the Dutch Parliament to get a reaction from the government about American nukes in The Netherlands. Government officials are simply saying they cannot discuss this issue on account of 'alliance agreements'.

In 1978 Willem Aantjes, leader of Dutch political party ARP had to resign after a document had surfaced that showed he had been a member of the Waffen SS during the German occupation of The Netherlands. Note that this information popped up out of nowhere 33 years after the end of World War II. Why only then? Could it be because, a month before Aantjes was discredited, he had stated in an interview that he considered the possibility of The Netherlands withdrawing from NATO?

The US does not shy away from blackmail to make European governments act in its interests. At least, that is the experience of professor Werner Weidenfeld, who coordinated relations with the US for 12 years for the German government. "If we disagree with the Americans on a serious issue, they put intelligence material on the table, compromising for Germany, and they say: "Either you co-operate or you are finished", Weidenfeld declared.

In 2002 US Congress passed the American Service-Members' Protection Act, nicknamed ‘The Hague Invasion Act’. It mandates the American president, to take military action in The Netherlands "to bring about the release of any US or allied personnel being detained or imprisoned by, on behalf of, or at the request of the International Criminal Court" in The Hague. The Dutch government protested. To no avail. The US never repealed the Invasion Act.

Practices like these are certainly not what the Americans who fought the Nazis had in mind for post-war Europe. It's putting their heritage to shame.

It seems to me one occupying power has replaced the other. But many of my fellow-Europeans still seem to be in denial. For decades they've been fed stories about the Bogeyman from the East, first by the Nazis who offered their services to protect Europe against the Bolsheviks; from 1945 on by the Americans. And so they're suffering now from some kind of Stockholm Syndrome.

In 1973 four hostages were taken during a bank robbery in the Swedish capitol of Stockholm. Although being put in danger by their captors they formed a psychological alliance with their captors. Even after being released the hostages kept defending them and would not agree to testify in court against them.

Large parts of Europe were taken captive by the US, so to speak, and many Europeans have come to believe their captors are in fact their liberators.