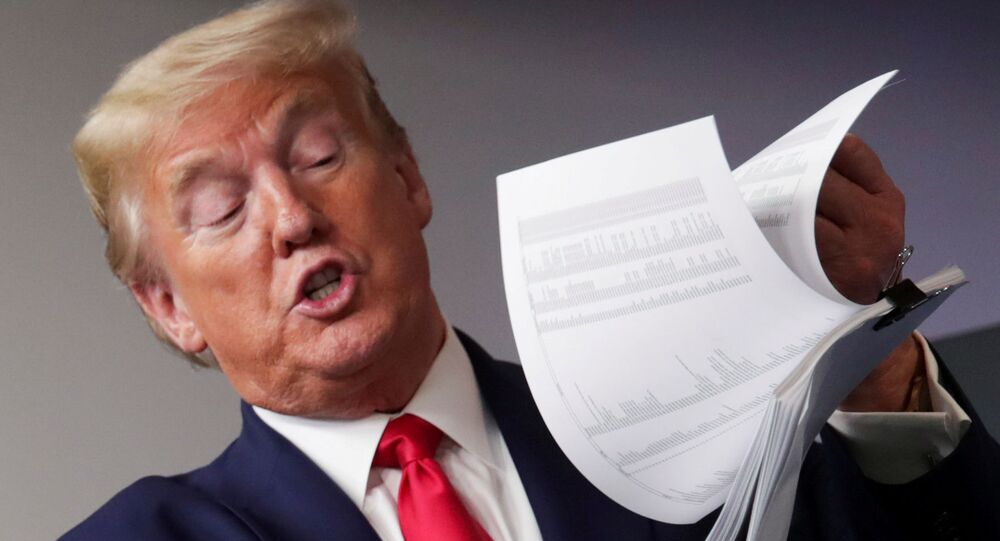 President Donald Trump could end up starting a war – either a civil war at home or an international one with China. Such is this president’s demagogic knack for wriggling out of responsibility for problems. Blame others and to hell with consequences.

Let’s start from the premise that America’s grim experience of the COVID-19 pandemic has Trump’s ownership written all over it. Trump has gone from “it’s not a problem” to presiding over the world’s leader by far in casualties from the disease. The abysmal failure to adequately deal with the crisis belongs to the Trump administration.

Admittedly, failures by previous administrations to build defences against pandemic risks, despite warnings, are also a factor. But the buck stops with Trump.

Understandably in capitalist America, millions of workers normally subsisting from paycheck to check are hurting from the enforced shutdown of society and the economy. The frustration from not being able to earn a living – in a country with minimal workers’ rights and social security – is understandable. Many workers need to get back to work in order to survive.

Trump is ably playing on those grievances with a twist of patriotism thrown in, hailing protests against lockdowns to “liberate” their states.

Polls show that most American citizens do not support the recent anti-lockdown demonstrations. Most citizens seem to agree that public health safeguards against COVID-19 require a programmed closure of business – painful and stressful though that may be – until this epidemic is defeated.

Trump, on the other hand, is giving oxygen to the anti-lockdown protests in defiance of his own federal government’s recommendation for social distancing. The attendance of heavily armed protesters at rallies against stay-at-home orders speaks of a situation where violent civil unrest is brewing.

Trump calls the protesters “great people” even though some of them were flaunting white supremacist regalia and voicing extreme bigotry. At one rally in Colorado, rightwing pro-Trump followers vilified nursing staff holding a counter-demo in support of public distancing by angrily yelling at the medics, “Go home to China”.

Instead of dousing fuel on social tensions, the Trump administration would be better ensuring all workers are provided with adequate social welfare payments for as long as is needed. After all, Washington has no problem showering Wall Street and the military-industrial complex with trillions of dollars. Hence, workers should be safeguarded from hardship while they are laid off or furloughed.

In that way, the pressure is taken off workers who are desperately seeking to get back to work in order to make a living.

But Trump, despite his populist rhetoric, won’t do that. As part of the oligarchy, he wants American workers to get back to making profits for the corporate class as soon as possible. Under the cover of proclaiming patriotic freedom and “liberating” states from lockdown, Trump is fueling frustrations and setting up a potential civil clash.

The international side of this demagogic coin is the scapegoating of China for America’s social and economic failings that the COVID-19 pandemic has exposed.

Trump says his administration is looking into whether China is responsible for the global pandemic. Most disease scientists concur that the new coronavirus was a naturally occurring outbreak. China and the World Health Organization gave international warnings about a pandemic in January.

However, rightwing boosters of President Trump such as Steve Bannon have already made their minds up. Bannon told Fox News that the Chinese Communist Party has “blood on its hands” for the deaths of Americans and the damage to the US economy. It is claimed that the virus escaped from a laboratory, a claim which many scientists have debunked as a false.

“China Lied, People Died” is the slogan being taken up by pro-Trump American nationalists alleging that the Chinese authorities deceived the US into inaction. There are calls by rightwing think thanks like the Hudson Institute for China to pay trillions of dollars in compensation to America.

Past experience with US intelligence concocting lies over weapons of mass destruction in Iraq and on many other instances, such as denigrating Venezuela and Iran for regime change, or to take another example regarding the spurious “Russiagate” scandal, all suggest that the tendency is strong for China to be likewise set up as a culprit to take the rap for the COVID-19 disaster.

© REUTERS / JONATHAN ERNST
Trump Says Will Sign Executive Order Temporarily Suspending Immigration Into US
The targeting of China by the Pentagon in recent years over territorial disputes in the South China Sea as well as the general depiction of China by Washington as an adversarial super-power makes the COVID-19 confrontation all the more dangerous as a potential war footing.

Scapegoating is germane to Trump’s so-called “art of the deal”. He never takes responsibility for any problems. The COVID-19 crisis in the US is a Trump humdinger. Just look at the exceptional figures on American casualties and social hardship. If that does not suggest something inherently wrong with the American system then nothing will.

But by scapegoating others, Trump is setting America on a dangerous path, both at home and abroad.