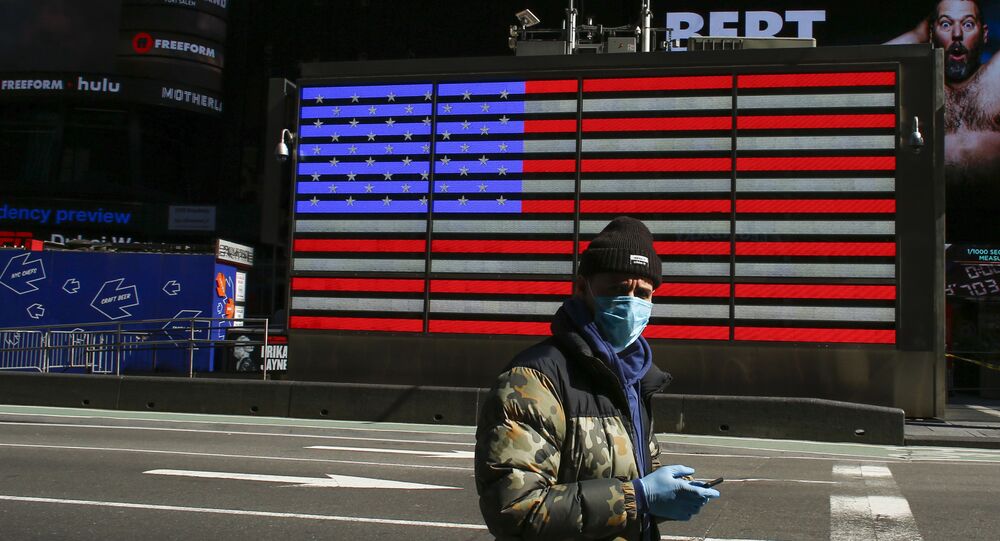 While countries like China, Cuba and Russia are sending medical teams and supplies around the globe, the US abuses the coronacrisis to throw mud at China and break Iran and Venezuela. The Trump administration now even has been accused of 'modern piracy' and 'Wild West methods' by some of its closest allies.

"You never want a serious crisis to go to waste", Rahm Emanuel, former chief of staff to President Barack Obama, once said.

What he meant by that was that in 2017 and 2018 the financial system had gotten so close to the abyss that it enabled the Obama administration to take measures that had been postponed for too long, such as a financial regulatory overhaul and the support of alternative energy initiatives.

The Trump administration is now giving a whole new meaning to Emanuel's expression. It's abusing the coronacrisis to intensify punitive measures on the already crippled health systems and economies of Iran and Venezuela.

“The administration is taking a kind of ‘kick them while they’re down’ approach", Peter Harrell, a former senior sanctions official at the state department, explained to British newspaper The Guardian.

It also looks like the US was involved in a foiled attempt of a former major general of the Venezuelan Army to kill Maduro and other government officials. The coup d'état would be executed between March 23 and 25, during the social and collective quarantine decreed by the Venezuelan authorities to stop the expansion of the coronavirus.

For some weeks now US officials have been hammering into the heads of the American people China is to blame. President Donald Trump and congressional leaders have repeatedly described COVID-19 as the 'Chinese virus' and the 'Wuhan virus'.

Secretary of State Mike Pompeo even insisted the G7 should refer to COVID-19 as the ‘Wuhan virus’. And as always the US intelligence community and other anonymous sources are feeding the media with incriminating information journalists are unable to check ("China has concealed the extent of the coronavirus outbreak") or are simply not checked by journalists due to incompetence or laziness ("80% of Russia's coronavirus aid to Italy useless").

Blaming China is clearly a tactic the US government is using to distract from its own catastrophic failure to protect the American people against the virus.

Trump started attacking China shortly after the collapse of the US stock market and the New York corona outbreak. Previously he had been praising President Xi Jinping’s government for its handling of the virus outbreak.

The US government's blame game goes hand in hand with private initiatives to make a fast buck by holding the Chinese authorities liable.

A personal injury law firm based in Florida, Berman Law Group, is bringing a suit on behalf of "individuals and business owners in the United States and the State of Florida, for damages suffered as a result of the Coronavirus pandemic."

A Washington based organisation, Freedom Watch, is doing the same in a Texas court. Freedom Watch even alleges the coronavirus "was prepared and stockpiled as a biological weapon to be used against China’s perceived enemies".

The bioweapon theory was promoted by US newspaper The Washington Times but has since then been debunked by numerous scientists, both in the US and elsewhere.

According to scientists who researched the virus and published their findings in the scientific journal Nature, COVID-19 "is not a laboratory construct or a purposefully manipulated virus". An international group of public health scientists wrote in the medical journal The Lancet: “We stand together to strongly condemn conspiracy theories suggesting that COVID-19 does not have a natural origin."

© REUTERS / Mike Segar
COVID-19: US ‘Hijacked’ Batch of Face Masks Ordered by France From China - Reports
The Trump administration now even has alienated some of its closest allies. The German authorities accused the US of confiscating thousands of protective facemasks that the Berlin authorities had already paid for, calling it "an act of modern piracy" and "Wild West methods".

French politicians have also recently accused the US of buying up medical protective gear including face masks in China that had been meant for France. Canadian Prime Minister Justin Trudeau said he felt "concerned" by a report that a mask order arrived smaller than expected. "We understand that the needs in the US are very extensive, but it's the same in Canada, so we have to work together," Trudeau said.