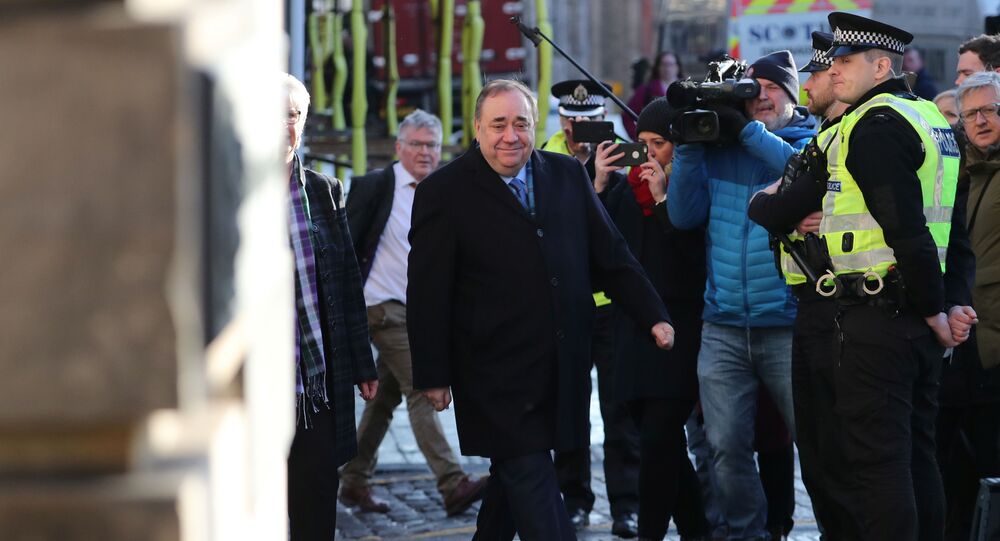 Before commenting on the entirely predictable acquittal of former First Minister of Scotland, Alex Salmond, on all 13 charges against him, which included attempted rape, sexual assault and indecent assault, at the High Court in Edinburgh on 23rd March it is absolutely necessary to remind ourselves of the context.

“If it looks like a duck, walks like a duck and sounds like a duck chances are it is a duck. Now replace duck with witch-hunt and you have the essence of the ‘sexual harassment’ case against Scotland’s former First Minister Alex Salmond”.

The above was the opening paragraph of an article I wrote about Alex Salmond and his Judicial Review victory in Scotland’s civil court last January. In a judgement handed out by the court an investigation into sexual harassment allegations against Mr Salmond was described as ‘unfair’, ‘biased’ and therefore ‘unlawful’. The judge said the investigation conducted against Mr Salmond was:

It was an investigation rigged against Alex Salmond and it fell apart at the seams once a spotlight was shone upon it. The whole embarrassing process cost the Scottish taxpayer in excess of £500,000 and I demanded last January that the two main civil servants involved should be issued with P45s and dismissed immediately:

“The reality is Leslie Evans and Judith Mackinnon, at least, were complicit in a biased, unfair and illegal investigation into Alex Salmond that was politically motivated and designed to ruin his reputation and standing. Nicola Sturgeon should be seeking the resignations of both these very senior civil servants and initiating a swift and focused public enquiry into the damaging press leaks which have occurred”.

Senior Civil Servants Should Resign or be Dismissed

The two senior civil servants didn’t resign but deeply embarrassing and very expensive criminal investigation into Alex Salmond was launched. Many feared the man would not be able to receive a fair hearing given the extensive, lurid and biased coverage against him that was played out by every newspaper and news outlet in Scotland. It was clear the unionist mainstream media had the whiff of rebel blood in their nostrils and they were going after Salmond with determination and delight blatantly ignoring the ‘innocent until proven guilty’ maxim.

Over the nine days of the trial the reporting was as unbalanced as possible for Alex Salmond. The words of his accusers were paraded in bold headlines while the doubts cast by his defence team were summarily ignored. He was guilty as sin as far as the mainstream unionist vultures were concerned. Fortunately, more balanced sources within the court issued reports which informed sceptical observers like me that the case against Salmond was as weak as wet toilet paper. Craig Murray’s reports from inside the courtroom in particular were an antidote to the unionist bile. Not all the evidence of politically motivated and coordinated allegations against Alex were permitted by the trial judge but the little allowed was powerful. Then the thoroughly credible defence witnesses who literally blew apart prosecution testimonies made the eventual outcome inevitable.

Case Against Salmond was Politically Motivated

Last week defence witnesses gave telling testaments under oath and were rarely cross-examined by the prosecution. That was the clear signal that they knew their case was holed below the water line. Failure to challenge a testimony in court is tacit consent to its veracity. The prosecution couldn’t lay a glove on the rebuttal evidence from the defence, including from Alex himself who took to the stand to refute ever assaulting or attempting to rape any of the accusers.

The jury included nine women. The decision to deliver 12 counts of not guilty and one count of not proven was taken after careful deliberation of the evidence available. The Crown had plenty of time to assemble their case. They had limitless resources. They were able to prohibit some important evidence from being heard which would have enhanced the defence case of ‘politically motivated fabrication’. The majority verdicts mean Alex Salmond won and is not the ‘sexual predator’ which the prosecution sought to portray him as.

The civil servants whom I named and called out for dismissal last January should surely now be tendering their own resignations. But they are not the only ones. It is clear the courtroom was the setting for a proxy political feud, an internal and bitter war within the SNP with opponents of Alex Salmond joining the civil servants to try and destroy Alex’s reputation and therefore any prospect of a political comeback. Consider evidence heard at the procedural hearing and withheld from the jury by the presiding judge, Lady Dorian and only now allowed to be published:

“During two procedural hearings held before the trial – which can only be reported now – Salmond’s QC Gordon Jackson argued that the Scottish Government were furious after the former first minister won his judicial review, and suggested there was a conspiracy against him and that one of the women had contacted some of the other complainers. He claimed that a woman in the Scottish Government had been encouraging “others to make false complaints” to the police. He read out a text from an SNP politician – who was also one of Salmond’s accusers – about the woman, which read:

“Jeez, think [she] is in trouble. S isn’t going to stop until he gets her and he’s bringing down Nicola on the way.”

Jackson also said Scotland’s top civil servant, Permanent Secretary Leslie Evans, who was in charge of the investigation, had sent a text message to an unnamed person which read:

“We may lose the battle but we will win the war.”

Salmond is No Sexual Predator but he is a Political Leader

What is clear to all and sundry is individuals at the top of both the civil service in Scotland and with the governing political party, the SNP, have made not one but two attempts on the political life of Alex Salmond. He has been the target of a grubby and nefarious political assasination attempt and the latter one would not only have ruined his reputation it would also have taken his liberty and criminalised him for the rest of his life and landed him on the sexual offender’s list. Not everyone understands, although I do, the lengths people will go to in pursuit of political wars. Criminal activity like perjury and conspiracy to pervert the course of justice appear to have been committed in the Alex Salmond trial, and alongside the internal SNP and official Scottish Government investigations which will inevitably follow a criminal investigation should also be on the cards. Time will tell.

My wife and I know Alex Salmond. We never doubted he was innocent of the charges. Gail has witnessed him and many other senior politicians and powerful businessmen at swanky functions over the years when she represented British Airways in her role as a BA Promotional Team Leader. She has first-hand experience of the drunken high jinks and sexual advances of otherwise ‘respectable’ politicians and business leaders but neither she or any of her colleagues ever heard a complaint about Alex Salmond. Plenty of others yes, but not Alex Salmond.

This whole sorry saga is far from over. The independence movement is bigger than the SNP and will survive but it will inevitably be weakened by this political fallout. Alex was targeted in a malicious fashion. His reputation and liberty were threatened. He has been subjected to an atrocious campaign of derision, innuendo and slander by the reprehensible unionist press. That former colleagues and friends in the SNP aided that process is rank betrayal and unforgivable. Scores will be settled in the months to come. I predict Alex will serve up his revenge in several cold dishes when the time is right. Those who have plotted against him should consider his words outside the High Court yesterday with an appropriate shiver and dollop of shame:

“As many of you will know, there are certain evidence that I would have liked to have seen led in this trial, but for a variety of reasons we were not able to do so. At some point that information, that facts, and that evidence will see the light of day”